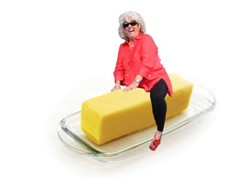 While malls and radio stations are already gearing up for Christmas, Gut Check is patiently awaiting the beloved return of Thanksgiving. Gorging on Halloween candy was a good warmup for the inevitable belly stuffing that will occur on the 24th, and as usual we're fully prepared to loosen our belt more than one mere notch.
Few joys compare to the feast that accompanies Thanksgiving. We're thankful for juicy turkey, tender roasted veggies, tangy cranberry sauce, buttery, hot-from-the-oven dinner rolls and pumpkin pie. Assuming the chef's got the turkey technique nailed, the only potential downside to dinner is mushy stuffing done wrong.

Read on for some of the most shudder-inducing stuffing recipes you may or may not be forced to endure this Thanksgiving.

1. Deep-fried stuffing on a stick
Leave it to Paula Deen to take something gross, put it on a stick, deep-fry it and make it even more gross. This stuffing recipe includes sausage, carrots, celery and Saltines (among other things), deep-fried in oil. We're skeptical of any recipe containing the sentence, "This should look somewhat like a lumpy corn dog," and we don't want to be responsible for anyone's cardiac arrest this holiday season.

2. Forcemeat stuffing
This recipe combines pulverized veal and pork with goose liver, which we swore off after an unfortunate childhood incident involving the dreaded "No dessert unless" ultimatum, liver and gizzards. Hardcore carnivores may disagree, but we don't need meat as a side dish for meat. Turkey and chestnuts suffice as protein; no need to overdo it. 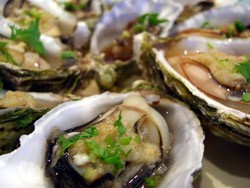 3. Herbed oyster stuffing
Given, this recipe includes bacon and herbs, but the key ocean-dwelling component rubs us the wrong way. No offense to oysters, which Gut Check is actually quite fond of, but this stuff is an offense to oysters. Thanks but no thanks.

4. Popcorn stuffing
The general idea behind popcorn stuffing is fatally flawed: Take something great and make it very, very bad. We like popcorn at the movies, buttered, salted, caramelized, cheesy and even artificially colored, but not combined with cornbread, chicken stock and turkey. The video by "Mr. Food" almost makes up for a horrible idea. On second thought, no, it doesn't.

5. Stuffed Camel
If you're going to spend hours getting your turkey the perfect combination of crisp on the outside and juicy on the inside, you might as well go for the gold and stuff a camel. Doesn't everyone have a camel, sheep and twenty chickens just lying around, waiting to be prepared and served to an entire city in Saudi Arabia? If you're still hungry after the camel (we're not judging), be sure to check out the recipe for elephant stew that follows. (With apologies to T. Coraghessan Boyle and his memorable "Stuffed Whole Camel" passage from Water Music.)