Update: (Tuesday, November 22, 11:30 a.m.) Inevitably, perhaps, an intrepid blogger has tried the vodka-soaked tampon and reported on her efforts. Details follow the original post after the jump! 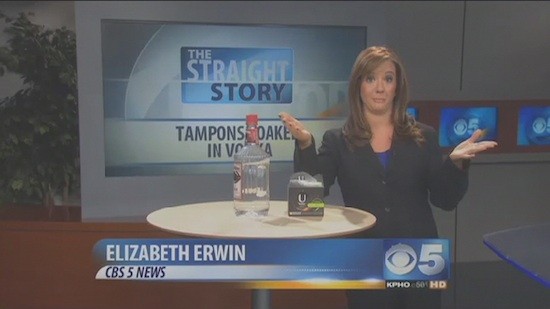 Taking shots of booze through the eyeball. Soaking gummi bears in booze. What adult-defying method of getting drunk will America's teenagers think of next?

If you believe a breathless report from KPHO in Phoenix, Arizona, those crazy kids are now soaking tampons in vodka and then inserting them into their hoo-hahs or no-nos (vaginas or rectums, for those not versed in the latest jargon).

"This is not isolated to any school, any city, any financial area," Officer Chris Thomas, a school resource officer, said. "This is everywhere."

Officer Thomas is correct. It is everywhere. If by everywhere, you mean all over the Internet in varying states of amused disbelief.
Snopes, the official Internet resource for debunking email forwards from Grandma, took a long look at the vodka tamponing "trend" back in 2009 -- and claims to have print references to this "trend" dating back to 1999. That's the 20th century, kids. How hip do you feel now?
Snopes also calls bullshit on some of the purported advantages of vodka tamponing, namely that it's a way to hide your drunkenness from Mom and Dad by not having booze on your breath. To paraphrase: If you're the sort of dumbshit who's going to stick a tampon soaked in vodka up your cha cha or poop chute, you're probably going to act like a drunken dumbshit when you get home, booze on your breath or not.
There is also the question of insertion.
A blogger who goes by Aunt B. and writes for a blog called Tiny Cat Pants and who, despite having those two strikes against her, doesn't blog about cats, has written a post entitled "In Which I Debunk the Vodka-Soaked Tampon Myth" in which she attempts to debunk, well, you get it.
At any rate, her argument, which is persuasive, especially if you've never felt compelled to dip a tampon in vodka and then place it inside a mucus-membrane-lined part of your body, is that alcohol causes the tampon to swell to a point where insertion would be painful -- nay, impossible!
She has pictures. I guess they are safe for work, but I'm not the same after seeing them.
For the last word, we turn to Stephen Colbert, who dedicated a few minutes of last night's The Colbert Report to this epidemic sweeping the nation:

Update: (Tuesday, November 22, 11:30 a.m.) Danielle Crittenden, managing editor of the Huffington Post in Canada, soaked several different tampons in vodka, seeking the most absorbent specimen. The winner? A super-plus tampon without the applicator.


I repaired to the bathroom and -- without too much information here -- managed to wad the thing up and push it in where it was supposed to go. (Did it help that I've had three kids? Possibly. )

Well, if nothing else, she wins the TMI award of the week.

At any rate, after ten minutes of an excruciating burning sensation, she felt what?


Certainly a definite, if slight, lightheadedness.

So there you go, kids. Go ahead and stuff a vodka-soaked tampon into your holiest of holies. Or just spin around in circles for a couple of minutes.

(h/t for the update: Eater)