Welcome to Girl Walks Into a Bar, a weekly Gut Check feature that spotlights local bars and bartenders. This week, Emily Wasserman profiles Pomme Cafe and Wine Bar's Josh Martsolf. Below is a Q&A with Martsolf, followed by his recipe for the Asian Pear Martini.

Amongst the bigwigs of the Clayton restaurant scene, Pomme Café and Wine Bar (44 North Central Avenue; 314-721-8801) could very well go unnoticed. Its quiet ambiance and laid-back approach contrast with other, livelier institutions, and its sister restaurant (just two doors down) offers a larger dining room and special prix-fixe menus.

However, diners who are looking for quality wines at a bargain price visit the café, rather than the restaurant, where bartender Josh Martsolf creates custom cocktails and serves vintage wines by the glass.

Martsolf moves with ease behind the bar, and one would think that he's had years of experience. But his path toward becoming the café's bartender was more of an evolution than a calling.

"I started here as a server during brunch but wanted more flexibility because I was playing in a band at the time. I transitioned to serving dinner and then ended up moving behind the bar," Martsolf says.

Although Martsolf found his career in bartending more by chance than by choice, he still remains passionate about his work and enjoys the "range of possibility" and "creativity" involved in handcrafting custom drinks.

"There's an attention to detail in creating cocktails; if you use the appropriate amount of bitters or vermouth, or a twist instead of a wedge," Martsolf says, "It's like producing a piece of art."

This attention to detail is apparent as Martsolf creates the restaurant's "Asian Pear Martini." He contemplates adding ribbons of pear to the top of the drink and stresses the importance of using fresh ingredients to create authentic flavor.

In a restaurant where the most popular drink order is a Chardonnay, Martsolf challenges guests to think outside the proverbial box and take a chance on a drink that they otherwise would have ignored.

"If someone comes in and says they don't want a cocktail that I really like, I'll try to prove them wrong," Martsolf says. "I'll say to them, 'This is the cocktail done right.'"

A girl walks into a bar and orders a ________. She has just earned your undying admiration. Rye Manhattan on the rocks.

Other than your own place, where do you go to get a good drink, and what do you get? The Moolah Theatre. They have themed cocktails that go with each movie. For example, they had classic, English-themed cocktails for The King's Speech, and modern cocktails with pharmaceutical names for Contagion. They're creative in the name, but the cocktails also taste really good.

What's one thing most people don't realize about crafting cocktails? Subtlety. For instance, in a Manhattan or a martini, people claim they don't like vermouth. They probably don't like it because there was as much vermouth in the drink as there was vodka. People try to put two equals of something in drink, when the pairing should be complementary. A touch of vermouth is like a touch of the right spice in a dish; it's possible to overdo it, so you just need it in the right proportion.

Who would you most like to have a drink with? George W. Bush and Barack Obama. At the same table.

What is the most bizarre/stupidest/dumbass drink anyone has ordered from you? A vodka martini with no vermouth. That's just chilled vodka.

What's the coolest/ weirdest thing you've witnessed while working? Two grown men in their forties who were brothers got into a physical altercation that included headlock and a brand-new iPhone dropped into a cup of water when a call to the police was threatened. It all culminated with their elderly father stopping by and breaking up the argument. 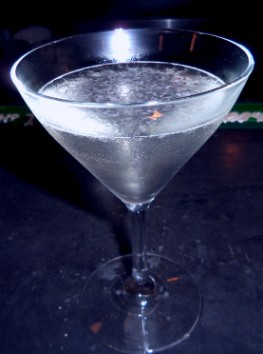 Shake and serves in a martini glass.