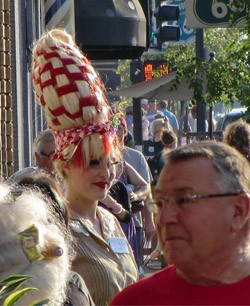 Seven years ago, an art-starved resident came to Rachelle L'Ecuyer, director of community development for the city of Maplewood, with an idea. Why not host an art festival in the streets, featuring Maplewood-themed work by regional artists? That one voice was joined by others, leading directly to the inception of Let Them Eat Art, the city's annual celebration of all things creative and hyper-local.

The premier festival was planned in only six weeks, and drew between 600 and 1,000 people. "We got some really interesting artists to participate, and it was a very grassroots effort," explains L'Ecuyer. But the event had to evolve in order to continue drawing interest and participation. "We realized that if we did it again, we'd have to change it around a little. We couldn't do Maplewood-themed art every year. We'd have to start a museum or something!"

More and more shops and artists began to participate in the festival, and new artisans and entertainers were added each year. And in 2011 restaurants and bars were included for the first time, selling food and drink (including adult libations) from their storefronts.

The edible offerings return this year, with several shops in the city's historic district participating. It all kicks off with the Let Them Eat Art Pre-Party at Saint Louis Cellars, including wine tastings from 5 to 7 p.m. Then stop by Water Street Cafe for blackberry tequila sorbet push pops, The Crow's Nest for "metrosexual" cocktails and tacos, Home Wine Kitchen for homemade ice cream and Foundation Grounds for seasonal chilled basil lemonade and lavender lemonade.

Aside from all the one-of-a-kind goodies, many local purveyors will offer the old standbys, many of them at special prices. Stop by Kakao Chocolate for a chocolate tasting and sample French wines and specialty liqueurs at Vom Fass. Boogaloo will offer its sangria for only $5 all night and Orbit Pinball Lounge will offer special pricing on its cocktails, including the "Bloody Marie."

The entertainment extends beyond the edible, including live music by the Power Play Band, demonstrations from regional artists and artisans, dream interpretation, belly dancing, a dog costume contest, tarot card readings, dozens of kids' activities and even an appearance from some tie-dyed ponies. The festivities include something for everyone, and the folks behind the scenes are confident that you'll leave with a happy belly and a kick in their step. L'Ecuyer promises, "I have never seen anybody walk by and not start dancing."

This year's festival takes place this Friday, July 13, from 6 to 11 p.m. in downtown Maplewood (the bulk of the action will be taking place on Manchester Avenue between Big Bend Boulevard and Bellevue Avenue), which will transform to host the huge, free, family-friendly party. For more information, visit the City of Maplewood online.