Frida's Deli (622 North and South Road, University City; 314-727-6500) opened its doors on Thursday, July 12, offering fresh, vegetarian sandwiches, soups, salads and smoothies. Owner Natasha Kwan has been a vegetarian for 29 years, at times adopting a vegan diet, at others a raw foods diet, and has poised Frida's Deli to be a vegetarian-restaurant experience unlike any other in the St. Louis area. The menu includes meat-free alternatives such as seitan, tempeh and Match Meat -- currently Frida's isn't using tofu on its menu, though that might change in the future -- which appear in robust, hearty menu items such as the "crab cake burger," "steak" sandwich, tempeh "BLT" and spicy buffalo "chicken" sandwich. (All priced $8.95 and served with a seasonal cucumber salad.) 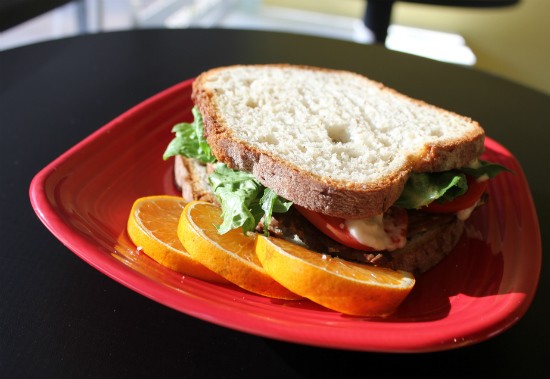 Though a native St. Louisian, Kwan has spent the better part of the last twenty years working in Chicago in marketing, a career that took her all across the country. Traveling afforded her the opportunity to explore a wide variety of vegetarian restaurants, which ultimately is reflected in her restaurant's creative and versatile menu. "It's a combination of kind of everywhere I've gone," says Kwan. "You have to get them with the comfort foods. I have a lot of comfort foods [on the menu], but if you're raw, if you want no carbs, no salt, no olive oil, you can still have that."

When Kwan made the move from the Windy City back to St. Louis she continued to telecommute in marketing for two years before deciding to make the career switch to restauranteur. The deli's namesake, Frida, is Kwan's cat, inspired by artist Frida Kahlo. "I guess I would be considered the chef, says Kwan. "I do all the recipe development and tell [the cooks] how I want it prepared and they prepare it. Technically I'm the 'woman in charge' -- that's what my cards say. Frida is the owner. She's the one who owns me."

The all-vegetarian menu at Frida's Deli is friendly to a range of lifestyles, diets and allergies, offering gluten-free, dairy-free and vegan takes on classic hot sandwiches including a mushroom Reuben ($8.95), white-cheddar grilled-cheese ($7.95) and the Frida burger ($8.95), which Kwan says customers have likened to the flavor of a "Big Mac" from McDonald's -- sans the saturated fat and cholesterol, of course. The cold sandwiches menu features several raw options such as the mushroom-walnut burger ($9.95) and raw tacos ($9.95), as well as vegetarian-friendly deli standards such as the "turkey" sandwich ($8.95) and egg-salad sandwich ($7.95).

In addition to its hot and cold sandwiches, the deli also offers a handy build-your-own option for its sandwich, smoothie and juice menus. Kwan says the restaurant uses as much locally sourced produce and product as possible, and makes its dressings and sauces in house using natural ingredients and agave nectar for sweetener -- there's no sugar allowed on the premises.

Before Kwan opened Frida's Deli in its U. City location, the building housed a decidedly different kind of eatery: Diamant's Kosher Meat Market, a Jewish butcher shop that ran the length of three storefronts on North and South Road for more than 40 years. Kwan describes the stretch of establishments currently occupying the block as "health row," with the Mind, Body and Spirit Center on the corner at 7649 Delmar Boulevard and Missouri Running Co. just a few doors down at 606 North and South Road. Kwan says she's excited to contribute another positive, healthy business to University City, where she is also a resident. "This is a lifestyle restaurant," says Kwan. "I'm 100 percent dedicated to good health and exercise."

In the near future Kwan says the restaurant will add vegetarian, vegan and gluten-free pizzas to its menu, and that customers can look forward to new specials and seasonal menu items as well. There is also a kids' menu at Frida's that offers pint-size, plant-based fare, as well as a small dessert menu. Salads at Frida's Deli are few but substantial. There is the chopped kale and pepita salad, Caesar salad, egg-white salad and "The 007," a spinach salad with blue cheese crumbles, red onion, tomato, cucumber and blue cheese-stuffed olives served with gin-cucumber dressing (all salads are $8.95). Gluten-free croutons are also available on any of the restaurant's salads.

"Most vegetarians aren't going to come to a place like this to eat salad," says Kwan. "I don't like lettuce-based salads. I like an edamame salad or a black-bean salad or a quinoa salad. Our salad bowls are 64 ounces. Our salads are giant; they're a meal. As they should be."