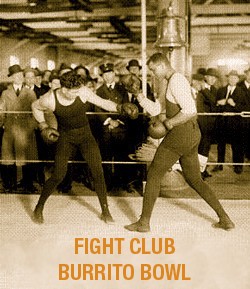 "Can Taco Bell Do Gourmet?" and "Think Taco Bell Can't Do Gourmet?" are questions scrawled across promotional materials for Taco Bell's new Cantina Bell menu. As Gut Check reported in July, Taco Bell introduced its new menu in stores nationwide on Thursday, July 5. It was no surprise when, days after its release, Karl Welzein, a.k.a. @DadBoner, summarily rejected the Cantina Bowl -- though he's a fan of bold flavors for sure, he never much takes to anything aimed at "evolving palettes."

Despite @DadBoner's disdain, Gut Check was still compelled to try the Cantina Bowl and discover how it compares to Chipotle Mexican Grill's burrito bowl. For research purposes, this comparison seemed the most natural, as the marketing of Taco Bell's Cantina Menu smacks of the same buzz-word language and trendy ingredients pioneered to the fast-casual-dining masses by Chipotle.

The Contenders Gut Check International Headquarters just happens to be conveniently located within walking distance of a Chipotle Mexican Grill (6316 Delmar Boulevard; 314-678-3200) and a Taco Bell (851 North Skinker Boulevard; 314-863-3315), which made short work of procuring the bowls, if not extended work of our lunch hour.

Though our proximity to both stores is undeniably convenient, we understand that locating a Chipotle, not only in the St. Louis area, but elsewhere in the Midwest, can be a challenge. Sad, empty and lurching were the years before Chipotle finally built its first restaurant in St. Louis. Alternatively, we're never far from the glowing signage of a Taco Bell, which we admit, is a factor to consider. Maybe the Cantina Bell fairly holds its own against Chipotle burrito bowls, but even if it's slightly less tasty, its omnipresence surely counts for something.

Meanwhile, the language and ingredients do, at least in Taco Bell's marketing of the Cantina Bowl, seem to eerily mirror Chipotle products. According to Taco Bell, the "Cantina Bowl Chicken" piles, "...our new citrus-herb marinated chicken, flavorful black beans, guacamole made from real Hass avocados, pico de gallo prepared fresh daily, roasted corn and pepper salsa and a creamy cilantro dressing" on a bed of cilantro rice. The build-your-own burrito and/or bowl model at Chipotle means Gut Check approximated like ingredients from its menu to create a similar bowl from Chipotle including cilantro-lime white rice, vegetarian black beans, adobo-marinated and grilled chicken, guacamole, corn salsa and pico de gallo salsa -- as a side note, opting out of cheese, sour cream and fajita veggies and paying $1.80 extra for guacamole for this experiment further turns the knife in that $6.25 (make that $8.05) wound.