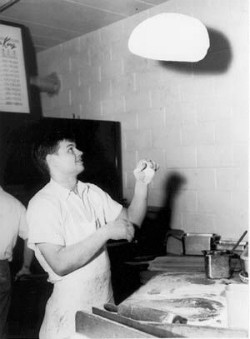 "His views are not our views, nor are his actions in any way related to our actions," Lozen says. "Domino's Pizza has made no public statements about health care, as we are still waiting to see how the final rules will affect our network of small business owners. Domino's is not a political company; it is not a religious company -- we are a pizza company."

It's like national pizza chains don't want our business these days.

On Friday, November 14, Domino's Pizza founder Tom Monaghan filed suit against the federal government over a provision within the Patient Protection and Affordable Care Act requiring employers to offer health insurance, including contraception, to employees. [Tom Monaghan sold Domino's Pizza in 1998 and has no active affiliation with the company.]

In the lawsuit, Monaghan, a self-identified devout Roman-Catholic, argues that the provision violates his rights, and that contraception isn't health care but a "gravely immoral" practice, AP reports.

As Gut Check reported earlier this month, a recent study found that anti-Obamacare threats made against employees by restaurant owners and operators hurt business and public perception of their companies.

This isn't the first time Monaghan's personal politics have been under public scrutiny. In 2001, Monaghan financed a ballot initiative to remove sexual orientation from a Michigan nondiscrimination ordinance.

As Salon reported this past summer in the wake of Chik-fil-A-gate, Monaghan also supports anti-choice groups such as Operation Rescue, Right to Life, Priests for Life and the Committee to End State-Funded Abortion in Michigan.

Tags: This Just In, WTF?, Image

Speaking of This Just In, WTF?