Gut Check has uncovered a dastardly scheme to ruin the new Flying Saucer Draught Emporium (900 Spruce Street; 314-932-1456) downtown and spit in the face of every Cardinals fan.

Confronted with the results of our investigation, we asked the man at the center of this travesty -- one Joe Hoffmann, recently of Kansas City -- if he realized he is about to become the most hated man in St. Louis.

"I don't care!" he cackled diabolically.

Last night, Flying Saucer threw open the doors on its latest craft-beer mecca in downtown St. Louis, practically at the gates of Busch Stadium. This is the sixteenth location for the Texas-based chain, which will serve 80 beers on tap and another 150 in bottles. Some of the selection rotates based on seasonality and availability. 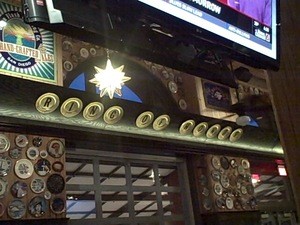 The chain also offers membership to a little something called the "U.F.O Club." Once a customer has tried 200 different beers, he or she is immortalized with a plate bearing their name and a quote of choice, and hung on the wall in the "Ring of Honor." The plates are numbered and hung in order of the date achieved.

Hoffmann says he's been a loyal patron (with five U.F.O. Club plates to prove it) of the Flying Saucer location in Kansas City and moved to St. Louis only two months ago because of work. When he heard that a Flying Saucer was coming to St. Louis in March, a beautiful and truly evil seed was planted in his brain. He started a donation page on the website Go Fund Me and here's how he explains it there:

Like any self-respecting Royals fan, I have no love for the Cardinals. So I came up with the idea of going after the #1 plate in the Saint Louis Flying Saucer, except instead of my name, it would be adorned with the name of Don Denkinger, the first base umpire who "blew a call" that allowed the Royals to win game 6 of the '85 World Series. The Royals went on to win game 7 and the World Series away from the Cardinals. While most Cardinal fans will deny any existence of a rivalry with the Royals, I feel this act will be viewed with great contempt, especially in a bar that looks directly at their stadium and will likely be filled with Cardinal fans on game days.

Hoffmann also already knows what the quote will be: "SAFE!"

And he would have gotten away with it too, if it weren't for those meddling Cards fans.