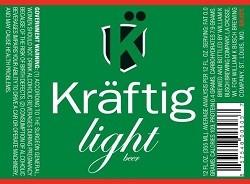 The North American Beer Awards (or NABA for those in the know) recently awarded a gold medal in the American-style light lager beer category to Krӓftig Light, brewed by St. Louis-based William K. Busch Brewing Company. Krӓftig beat out several of the bigwigs, including second-place Michelob Ultra and third-place Budweiser Select.

But is Krӓftig really as good as the NABA judges say it is? To answer that, Gut Check recently conducted a blind taste test pitting Krӓftig Light against its major competition -- Bud Light, Miller Light and Coors Light. Let the can cracking commence...

But first, a bit of history: There is a bit of irony here in that Krӓftig's William (Billy) Busch is a member of the Busch family that for over a century owned and operated Anheuser-Busch before selling the brewery to global behemoth InBev in 2008. Three years later Billy Busch founded Krӓftig as a way to keep the family name in the beer biz.

One of Busch's first order of business was to bring in Marc Gottfried, the former brewmaster at Morgan Street Brewery. As Krӓftig's head brewer, Gottfried is charged with crafting a quality beer that appeals to a wide audience, and it's evident that he is passionate about his product. Gottfried arrived at the RFT offices the other week with a twelve pack of both Krӓftig and Krӓftig Light and quickly launched into why he believes NABA's judges got it right.

The NABA award (coupled with the general growth of the Kräftig) confirms that more and more people are enjoying the beer. And it bodes well for Kräftig's developing role as a key player in St. Louis -- and beyond. While Kräftig is currently brewed in Wisconsin, Gottfried insists that there are plans for expansion in St. Louis.

"Absolutely," he says, "there is no set date...[but] it is 100 percent the plan. My gut tells me that within two years, I think that we would really be getting our act together and really be getting serious about looking at spaces."

With St. Louis' growing reputation as beer-centric city, the establishment of a major brewery headed by a Busch could be seen as yet another type of renaissance. In the meantime, Gottfried is completing work on a ten-gallon experimental brewery in St. Louis that allows him to simultaneously ferment six variations of the Kräftig recipe.

But what Gut Check really wanted to know is: What is the difference between Kräftig Light and Bud Light, or any other light beer? Is one really better than the others? Is one more delicious on a sweltering summer day after you've just mowed the lawn? Essentially, how is Kräftig not just another beer?

Continue on for Gut Check's taste test of Kräftig Light.