Chef Chat: Chase Overacker on Cooking in the Marines, His Food Crush and Fox Park 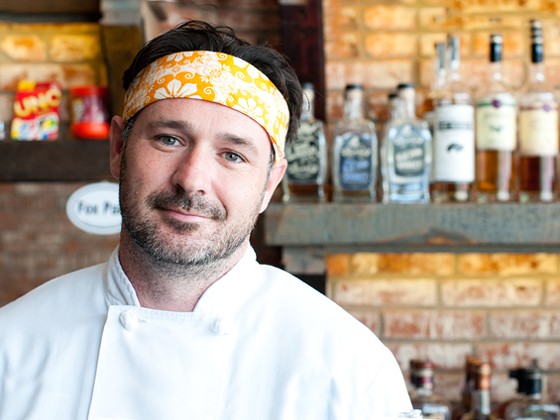 It was a long road from the Smoky Mountains of eastern Tennessee to the Purple Martin (2800 Shenandoah Avenue; 314-898-0011) in Fox Park, but it made Chase Overacker the chef he is today. "I grew up around classic Southern comfort food," he explains. "Gumbo, shrimp and grits, anything smoked -- pork and duck -- I always knew I wanted to cook."

Overacker's culinary calling took a circuitous path through the U.S. Marine Corps. "I joined the Marine Corps at seventeen," Overacker recalls. "I went in wanting to be a chef, but they cut the job as soon as I finished training." Still, he jumped at the opportunity to hone his craft while in the service. "I was just one of eight Marines ever selected to compete in the Armed Services' version of the World Culinary Olympics. I was so young," Overacker laughs. "I was just a kid who had no clue what I was doing. I thought I knew it all until I got there and quickly realized I was out of my leagues." Overacker says the experience, as daunting as it was, opened his eyes to a world of cooking that he didn't realize existed.

After leaving the Marine Corps, he cooked up and down the Eastern seaboard -- working in everything from fine-dining northern Italian kitchens to sports bars -- before making his way to St. Louis. After an injury that kept him out of the kitchen for two years, Overacker has a new lease on life at the Purple Martin. "It was so hard to not being doing something that I loved," he says. "I'm just so happy for this opportunity to be back in the kitchen."

Overacker took a break from developing the Purple Martin's new comfort-food-inspired menu to chat with us on his thoughts on the St. Louis dining scene, as well as his after-work bourbon of choice.

What is one thing people don't know about you that you wish they did? How much I love my job! I was out of the kitchen for almost two years with major back complications, and I feel a little rusty. I appreciate this opportunity and truly enjoy giving 150 percent into every dish that leaves my kitchen.

What daily ritual is non-negotiable for you? Meditation. During my tours with the Marines my mind got pretty overwhelmed. Combine that with raising a family and running a kitchen...I've gotta have my center.

If you could have any superpower, what would it be? I would grant wishes, and I would start with all of my veteran brothers and sisters, granting every one of them with the medical treatment, respect and emotional, spiritual and physical healing they deserve. Hell, while I am at it, I would cure the world!

What is the most positive trend in food, wine or cocktails that you've noticed in St. Louis over the past year? It's become so colorful -- so creative -- you can go to three different eating spots or watering holes in one night and come home feeling like you have eaten and sipped from around the world.

Who is your St. Louis food crush? Well, recently I have picked up a new one -- Chris Bork. He is a hell of a nice guy, as talented as they come, and I am just over the moon to get to do a dinner with him this month [at the Purple Martin]. My long-time crush would have to be Frazier Cameron [Frazer's Restaurant and Lounge]. When I was chef at Rue Lafayette, I had the pleasure of making him breakfast often. He is mellow, humble, grateful and his restaurant runs like a well-oiled machine.

Who's the one person to watch right now in the St. Louis dining scene? The rumor I heard is that just down the street from the Purple Martin, in Fox Park,there is a tea and sandwich shop preparing to open that will feature Burmese cuisine. The same bird told me that it will be opened by Pierce Powers and his partner, Lona, of Lona's Lil' Eats in Soulard Market.

Which ingredient is most representative of your personality? Cayenne pepper...burn ya to learn ya, baby!

If someone asked you to describe the current state of St. Louis' culinary climate, what would you say? Thriving. If you go out in St. Louis on any given evening the food options for culinary goodness are endless. It reminds me of Willy Wonka's Chocolate Factory -- you go out, and there are magical creations on every corner -- things you wouldn't expect to find -- and there's absolutely something for everyone.

Name an ingredient never allowed in your kitchen. Fake butter. I won't call it by name, but hell no!

What is your after-work hangout? I tend to stick around and enjoy a Scotch or a Henry Du Yore's [bourbon] neat with my coworkers. They're pretty great, like family, and every time I stick around I get to meet another interesting character. I have gotten to know many great people, and it works for me because I am a bit of a talker.

What's your food or beverage guilty pleasure? Anything smoked, for example the tri-tip that Alastair Nisbet, owner of the Shaved Duck, makes is simply irresistible. The man is a smoke master.

What would be your last meal on Earth? A cup of she-crab soup and bread salad followed by a jumbo pulled-pork sandwich topped with Carolina slaw.

Jump to comments
« What is St. Louis' Most Underrated…  |  Kaldi's at Farrell Opens on Washing… »