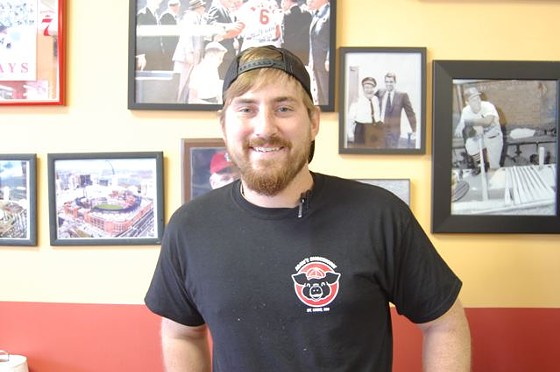 After cooking for the city's well-to-do at a private club, Alex Cupp was looking for a new culinary path. He never expected it would lead to the barbecue world, but when he saw the sign for a then-unopened Adam's Smokehouse (2819 Watson Road; 314-875-9890), something told him to go inside.

For the past year, Cupp has been learning the secret to the city's best barbecue from the masters at Adam's and its sister smokehouses, Pappy's and Bogart's. Though he is a force behind some of the best barbecue in town, Cupp is uncomfortable with the term "pit master." "Call me the 'pit boss', 'pit guy', 'pit dude' or whatever," says Cupp. "I just think that 'pit master' should be reserved for the people who have been doing this for years." These are humble words coming from the guy behind that soon-to-be legendary hot salami.

Cupp took a break from manning the pit to share his thoughts on the local food scene, as well as his Pint Size addiction.

What is one thing people don't know about you that you wish they did? I am pretty reserved until you get to know me. It doesn't take much for me to break out of my shell, but it may take a little prodding.

What daily ritual is non-negotiable for you? I do not have much of a routine but I like to get a nap in whenever I can.

If you could have any superpower, what would it be? I wish I could be in multiple places at one time. I would be able to prep multiple things at a time while staring over the shoulders of all my cooks.

What is the most positive trend in food, wine or cocktails that you've noticed in St. Louis over the past year? Casual fine dining. Well thought out and meticulously prepared food items served in a laid-back environment where no reservations are necessary seems to be a trend, and I cannot be more thrilled. I'm a jeans and t-shirt kind of guy so I don't like to put much thought into what I have to wear when going out to eat.

Who is your St. Louis food crush? Hands down Christy Augustin [at Pint Size Bakery]! Anyone who knows me can tell you the quickest way to my heart is through baked goods. I get a 'sconer' just thinking about the perfectly crispy and delicate crust of damn near all of her food.

Who's the one person to watch right now in the St. Louis dining scene? Jamey Tochtrop of Stellina. He has always been my wild card vote for one of the top chefs in the area but I feel like Jamey and his culinary team have been re-energized. I am very excited to see what can become of his restaurant.

Which ingredient is most representative of your personality? Probably an onion. An onion has many layers. It can be sweet, it can be bitter, it can become the star of the show, or it can be laid back and a subtle addition to a dish.

If someone asked you to describe the current state of St. Louis' culinary climate, what would you say? St. Louis is becoming and has become a hotbed for young, talented and fearless chefs willing to take big risks. It is very exciting to be part of a scene that is beginning to get some national attention. I think it should be said that the consumer has become more involved and genuinely interested in their food. This makes it possible for us to keep trying to push our boundaries.

Name an ingredient never allowed in your kitchen. Part of my craft is taking something that is maybe not so tasty and turning it into something palatable, so I would never rule out any ingredient. That being said, I once had a cruel joke played on me, so I have ruled out the combination of ghost peppers and amino acids.

What is your after work hangout? I frequent Salume Beddu when I get off work at least once a week. I love my cured meats.

What would be your last meal on earth? I would start with a roasted brussel sprout salad. I would then move onto a braised short rib, fluffy whipped potatoes, corn succotash, crispy tobacco onions and a nice Burgundy wine. I would then be locked inside Pint Size Bakery where I would eat myself into a coma I would not recover from.