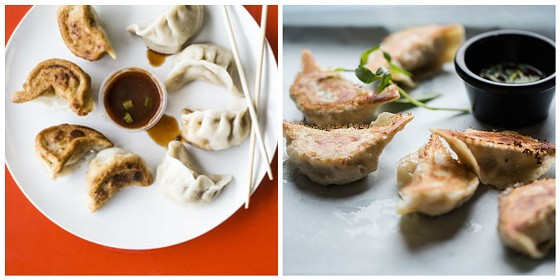 Two of the Riverfront Times' most celebrated restaurants of 2014 have more in common than their Chinese-influenced backgrounds: Both Lona's Lil Eats (2199 California Avenue; 314-925-8939) and Bek-Hee (10200 Page Avenue, Overland; 314-426-4773) turn out some seriously delicious dumplings. For this week's Thursday Throwdown, we are sampling their wares in order to determine who is the dumpling master.

When he took over the turnkey chop-suey joint Bek-Hee, patriarch Jin Lin could have simply unlocked the doors, fired up the fryers and continued to serve the same premade food as the previous owners. Instead, he committed himself to showcasing the best of what his Chinese hometown has to offer -- including his pillowy, pork-filled dumplings. Lin makes his version from scratch, filling them with a hearty amount of seasoned ground pork and a few green onions. The bottom of the dumpling is seared to a crisp golden brown while the top remains silky smooth. The highlight of the dish is the secret recipe dipping sauce: a mouth-watering concoction that tastes like rice wine vinegar, fish sauce and garlic.

Not long after her food stall opened, word of Lona Luo's handcrafted dumplings spread through Soulard Market and gave her quite a following. Now, with a brick-and-mortar restaurant in Fox Park, Luo continues to dazzle with her scrumptious fare. Her dumplings are stuffed with peppery beef, diced smoked mushrooms, onions and housemade pickles, creating a complex interplay of flavors. Her accompanying chile-sesame vinaigrette equally hits several taste components -- salt, spice and sweetness caused by smoking the vinaigrette with fruit peels.

Choosing a winner for this dumpling challenge was like choosing a favorite child. Both contenders are uniquely excellent. However, Lona's Lil' Eats' interesting mix of flavors and more supple wrapper gives it the narrow edge.

Jump to comments
« The 8 Best Diners in St. Louis  |  A Look Inside KimCheese's New Secon… »