A Look at Sauce on the Side's Expanded Relocation Downtown

Nearly a month after moving from its original downtown location into bigger digs just a few blocks away, Sauce on the Side (411 North Eighth Street; 314-241-5667) catered to a group of more than 200 nearby convention guests at once for a Friday night dinner rush. With the addition of a second production line as well as two more ovens, the kitchen staff was able to whip up 170 calzones and 40 salads -- all from scratch -- to accommodate the large party.

"We never could've done that at the old space," says co-owner Brendon Maciariello. "With the space at 903 Pine, we'd just kind of outgrown it. We were looking for a little bit more space for the guests and a kitchen to match the volume of what we were doing." 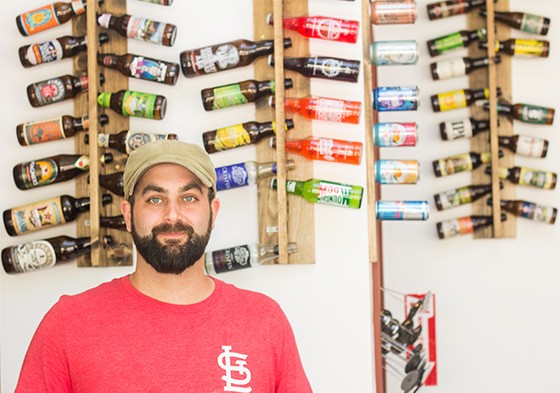 The restaurant's new downtown home is located at the base of the residential tower at the scenic Old Post Office Plaza, filling the area most recently occupied by Shula's 347 Grill, which closed in 2012.

The 4,100-square-foot space boasts about 1,100 square feet more than the original restaurant and retains several features from its former life, including intricate light fixtures, sculptures, curved ceilings and floor-to-ceiling windows. Sauce on the Side's simple yet sleek design will be familiar to diners at the previous location, although here it's highlighted by a colorful new mural from local artist Phil Jarvis. The capacity jumps to about 100 more seats, with room for 112 in the dining room and 86 more on an expansive patio.

The food menu remains the same, with a list of fourteen specialty calzones such as the "Figgy Piggy" with applewood-smoked bacon, figs, balsamic onions, boursin, mozzarella, ricotta, garlic-honey oil and red sauce. Build-your-own calzones are also available, as well as six salads.

A new feature is the restaurant's partnership with Serendipity Ice Cream, which allows patrons to order their dessert calzones a la mode. In addition to 70 different varieties of beer the bottle, Sauce on the Side now offers six draft beers which will rotate every month or two.

"When we first came down here in 2012, we decided that we wanted to be a part of the downtown scene in the hopes that it'd keep building up and building up," Maciariello says. Now, approaching the restaurant's third anniversary, a new location two blocks over seems ideal: "It just made a lot more sense moving over here because there's so much that goes on in this plaza. It's a great place for meeting people for different functions, and it's great exposure. We're super excited. It's everything we really wanted."

Jump to comments
« For Brunch at Capitalist Pig, Break…  |  Cider House In Grafton Plagued by H… »