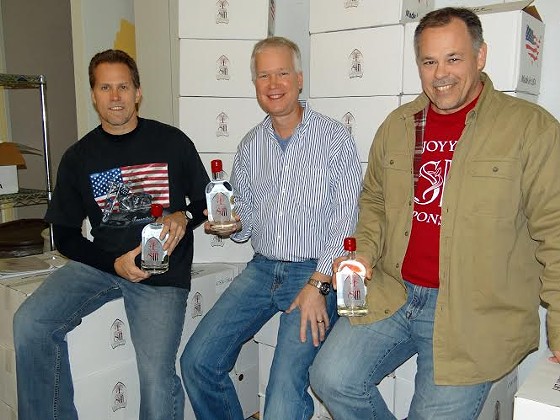 Schroer is about as unlikely a distiller as they come. A respected orthopedic surgeon who spends his days doing knee replacements, Schroer has yet to quit his day job. It's unlikely that will come anytime soon (he does hundreds of surgeries a year and lectures around the country on the procedure), though the success of St. Louis Distillery's Cardinal Sin Vodka could make that possible. What started out as a little more than a hobby has turned into a major, high-tech operation that produces a spirit even he and his partners (Steve Herberholt and Greg Deters) are surprised by.

"We came to market about three years ago," Schroer explains. "I remember going to our first tasting at Lucas Liquors. It was the first time anyone but our wives and us had tasted the vodka. We were so nervous -- we didn't know if it was actually good or not. The manager took one sip of it, looked at us, and said, "This is incredible!" The words of encouragement led Schroer and his partners to enter Cardinal Sin into four different contests. They came away with the gold medal at all four.

Schroer and his fellow distillers were content making their vodka until a patient with a bum knee gave him an idea. "A woman came into my office with a bad knee and we got to talking about her business," Schroer recalls. "She said that she owned a cooperage, but that I probably wouldn't know what that was. I laughed and told her that she would be surprised." Their conversation led to an arrangement whereby her company would provide St. Louis Distillery with brand new Missouri white oak barrels so that they could age their vodka.

"We came up with the idea for our Starka barrel aged vodka to do something a little different," Schroer says. Though Starka has been around Eastern Europe since the Fifteenth Century, it has only recently become popular in the United States. Schroer isn't surprised that people are catching on. "It's like bourbon but smoother. Put it over rocks with an orange slice -- there's nothing better."

Schroer took a break from distilling vodka and replacing knees to share his thoughts on the St. Louis food and beverage scene, being a morning person and which local chef he'd love to spend the day with.

What is one thing people don't know about you that you wish they did? I wish more people knew that we have an award-winning vodka distillery right here in town!

What daily ritual is non-negotiable for you? I have to get up early and get working early. If I don't have something accomplished by eight o'clock, I'm a wreck.

If you could have any superpower, what would it be? To be able to work and play without sleep -- seems to be a terrible waste of time.

What is the most positive trend in food, beer, wine or cocktails that you've noticed in St. Louis over the past year? Local quality -- moving away from national chain restaurants and breweries to local eateries, microbreweries and artisan distilleries.

Who is your St. Louis food or drink crush? Gerald Craft [Niche] -- I would love to spend a day to see how this guy puts it all together. I bet he doesn't sleep much either.

Who's the one person to watch right now in the St. Louis food and beverage scene? Ron Beuchele, owner chef of Capitalist Pig and Mad Art Gallery. It's the most inventive food and location in town. Tell Ron, "Doctor Vodka" sent you.

Which ingredient is most representative of your personality? Cinnamon -- can be sweet or hot; and just like the challenge, a little is great, but too much will make you yack.

If someone asked you to describe the current state of St. Louis' food and beverage climate, what would you say? Inventive and creative. I'm amazed by the creativity I witness in bars and restaurants in pairing unlikely ingredients. We are so lucky to have so many original and diverse options right in our back yard.

Name an ingredient never allowed behind your bar. Cheap booze -- life is way too short to drink poorly.

What is your after work hangout? My back patio with friends drinking Starka mules.

What would be your last meal on earth -- including drinks of course. An award-winning chef presenting a tasting menu with wine flights. I love to indulge in the best of the best where a chef puts his or her talent and vision on full display.