Introducing Winter Flavor 2015 — and Recipes from All Your Favorite St. Louis Chefs 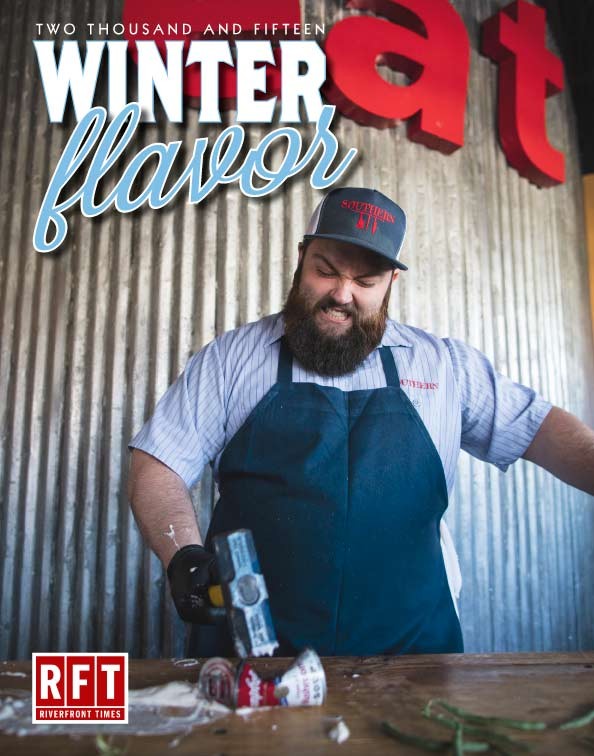 To food critic Cheryl Baehr, it's her mother's recipe for “Simmer Simmer,” which she knows represents "just about everything that was wrong with cooking in 1980s America." As she describes it, "Conventional hamburger meat is pressed into an eight-inch square Corning Ware dish. Oxidized black pepper and dehydrated onions are sprinkled on top, and golfball-sized dollops of Cheez-Whiz are plopped around the dish at inch-wide intervals. The entire concoction is covered in cream of mushroom soup, blanketed with frozen-tater tots and baked at 350 degrees for 50 minutes."

Baehr writes, "To those having their first bite today, 'Simmer Simmer' would probably taste like a bland cheeseburger casserole. To me, it has notes of a lazy winter afternoon, curled up in a Garfield sleeping bag in front of our fake Christmas tree. It’s the smell of our faux-metallic garland getting seared on the tree’s light bulbs and the Elmer’s glue on the cotton balls that made up our Santa Claus Christmas countdown calendar. That’s the nostalgic power of food: it can melt your ideals into a pool of radioactive cheese product. Tastemakers are not immune to the siren song of edible nostalgia – and that's never more true than during the holiday season."

For our first-ever "Winter Flavor" special issue, which hits the streets today, Baehr reached out to two dozen top chefs, bartenders and bakers in St. Louis. She asked them to recall their food memories and share a recipe inspired by holidays past.

The result is absolutely charming. Anne Croy, the acclaimed pastry chef at Pastaria, shares a story about growing up in Oklahoma and roasting a goose using Julia Child's instructions. Nancy Boehm, a baker at Pint Size, talks about learning how to make "Angel Biscuits" from her mother-in-law. And our cover boy, Rick Lewis of the much buzzed-about Southern, shares his recipe for green bean casserole — no canned mushroom soup in that one!

We'll be sharing some recipe highlights on this blog over the next week as we get ready for Christmas. But there's no substitute for actually picking up the issue. Designed entirely by the RFT's Production Designer Brittani Schlager and curated by Baehr, it's a great introduction to some of the city's top tastemakers, and a wonderful inspiration book for anyone trying to start new food memories and not just revisit to the old ones. America's cooking skills have definitely improved since the heyday of "Simmer Simmer" — high time you made something new.

Sarah Fenske is the editor in chief of the Riverfront Times. Reach her via email at [email protected]