Everything Josh Koester Knows, He Learned at a Truck Stop 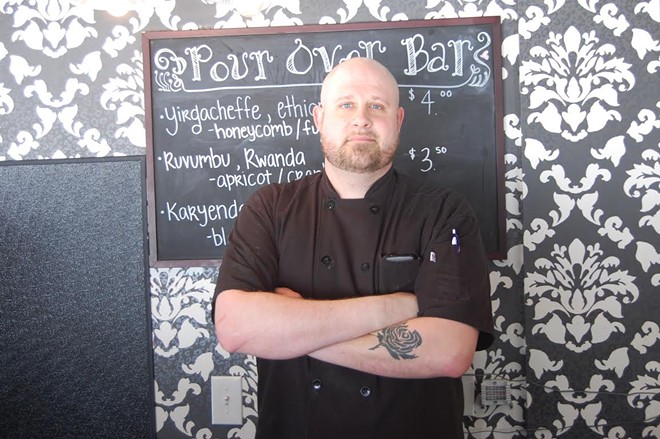 Chef Josh Koester got his culinary inspiration from an unlikely place — the 76 truck stop at the intersection of interstates 57 and 70 in Effingham, Illinois.


"My parents owned the truck stop where the interstates cross, and I grew up hanging around the kitchen there," says Koester, a chef at Colleen's (7337 Forsyth Boulevard, University City; 314-727-8427). "If you close your eyes and imagine a 1980s classic truck stop, this was it: the maple syrup pours that you've seen a million times, booths with phones in them so the truckers could make calls while they were on the road, a salad bar in the back seating area. We even had those dream catchers and tee-shirts with wolves on them for sale by the cash register."


Koester loved cooking, but when his parents sold the truck stop and bought a truck dealership, he felt compelled to go into the family business. For ten years, he worked in what he calls a "button-down desk job," though he spent his evenings doing odd cooking jobs. Finally, he realized he'd had enough.

"The decision to leave my family's business was necessary," Koester explains. "I mean, for ten years my mom was two offices down doing my payroll. It had definitely run its course."

Surprisingly, his family was supportive of his decision to pursue cooking full-time. "Everyone was very supportive, and I had them all behind me," recalls Koester. "I think they all saw it coming. The response I got was, "Well, it's about time."

Koester moved to St. Louis and began working for Bon Appetit Management Company, which runs food service at Washington University. One day, he went down the street to Colleen's Cookies to pick up some baked goods for an event he was doing. (The cafe has since begun calling itself just "Colleen's" to reflect that it serves more than just cookies.)

A casual chat with owner Colleen Thompson that day evolved into an ongoing conversation about her vision for the cafe side of her operations. She wanted to tweak and expand the menu, and she wanted Koester to lead the charge.

"We just clicked," Koester says. "What attracted me to the place was that it was a blank canvas. She had a really good foundation with her baked goods, but she wanted to do more on the cafe side of things, with entrees, blue plate specials, brunch and pop-up dinners."

His menu additions are more refined than what he used to sling in his truck-stop days, but he sees a strong connection to his cooking roots. "We had to take what we had and make it nice," Koester explains. "We had to take the classic American breakfast and elevate it so that it was nicer, but still recognizable. That's what I am trying to do at Colleen's — a combination of the upscale rooted in what I used to do growing up."

Koester adds that putting up good food is only part of what he aims for. "There is nothing better than hearing a lively front of house," he says. "Ultimately, I want to put out food that doesn't mess up the vibe, that keeps it going."

What is one thing people don’t know about you that you wish they did?
Besides being a chef, I co-host a nerdy comedy podcast called Freshly Baked Crackers.

What daily ritual is non-negotiable for you?
Phish at high volume on the way to the restaurant and a giant sweet tea to get me moving

If you could have any superpower, what would it be?
I feel like this is a cop-out, but I’ve gotta go with flight. I'm 6’8” so I obviously don’t have a fear of heights. I think flying would be the best.

What is the most positive thing in food, wine, or cocktails that you’ve noticed in St. Louis over the past year?
The St. Louis public is giving local chefs a chance to do a lot of cool things. I'm a huge fan of things like pop-up restaurant concepts, and we will be starting one in April. You can’t take chances like that without a receptive community, and I think we have one here.

Who’s is your St. Louis food crush?
I am currently obsessed with Byrd & Barrel. Love the food, staff and ambiance/music over there.

Which ingredient is most representative of your personality?
“Ogres are like onions. Ogres have layers.” - Shrek

If you weren’t working in the restaurant business, what would you be doing?
I’ve been playing music for most of my life, so hopefully that.

Name an ingredient never allowed in your kitchen?
I have no good explanation for this, but I’ve always found chocolate milk to be revolting.

What is your after-work hangout?
I’m a live music junkie so you’d find me at the Pageant, Old Rock House, Firebird, Ready Room, etc.

What would be your last meal on earth?
Thanksgiving dinner, with all the trimmings.