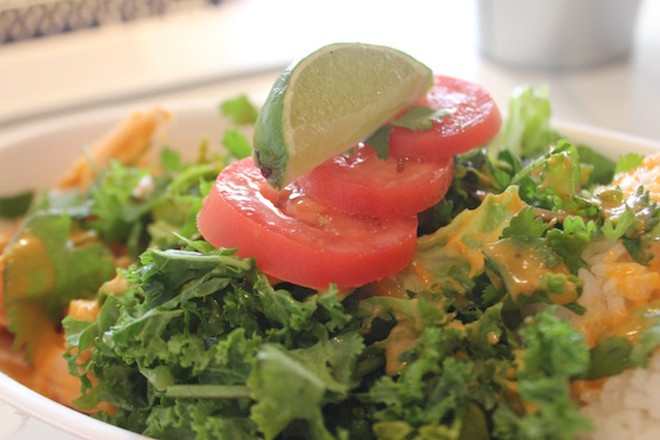 You don't have to be averse to gluten to enjoy the benefits of gluten-free food — or, for that matter, to enjoy the newest cafe to open in downtown St. Louis.

A2 GF CF (1330 Washington Ave., 314-266-3225) offers a full menu of gluten-free foods, with the option to go casein-free as well. (Casein is the protein in cow's milk.) And these aren't just rice bowls or piles of veggies. There's a full roster of sandwiches and even a line of pizzas, exactly the kind of food that most gluten-free eaters despair of ever finding.

Perhaps just as exciting, the space is a far cry from the frumpy look you might associate with good nutrition. Bright, light, with free WiFi, stylish modern furniture and an espresso bar, it's the kind of space you'd hang out in to write your screenplay or draft that presentation for work, even if you couldn't care less about good food. Lounge-style seating with mid-century lines beckons in an area near the big windows facing Washington Avenue, with table seating both inside and outside on the bustling sidewalk.

"If I had a cafe in my home, this is what I'd want to look like," says co-owner Audra Angelique Gandy.

A native of Portland, Oregon, with a background in branding and marketing strategy, Gandy first fell in love with St. Louis while visiting a friend. She moved here to perform with the famed Ralph Butler Band.

But then her life took a surprising turn. In St. Louis, she met Audrey Faulstich, a St. Louis native and registered nurse who'd become convinced of the benefits to a gluten-free and casein-free diet through her work with Dr. Tracy Fritz, a Webster Groves physician who specializes in integrative medicine. Faulstich was soon preaching the gospel to Gandy — and Gandy found herself experimenting in the kitchen. New recipes led to dinner parties which finally led to an epiphany: Hey, we should open a restaurant!

Using a base of sunflower seed flour from locally based Think Eat Live, they're able to offer everything from pizza to sandwiches to salads. The bread, baked in-house, has proven so popular that they're already hearing from customers who want a loaf to go. (They're accommodating when they can be, Gandy notes, but they ask for people to order their loaves a day in advance, since otherwise running out is a serious possibility.) The coffee is by Mississippi Mud, a custom blend you can also get to-go.

And if you think gluten-free means tasteless, you'd be wise to try the pizza — loaded with delicious toppings, you barely notice the crust, and even then it holds up. The Indian-Thai Tumble Salad, too, had us craving more; the coconut vindaloo sauce over soft shredded chicken and bright greens will make you forget you ever needed wheat to feel full.

A2 GF CF first opened its doors a month ago, and the co-owners enjoyed a softer opening that's allowed them to work through the kinks. For example, they found their pizza crusts will stand up to refrigeration but not being frozen, and that the bread tastes best if they bake it every day. They're working crazy hours, but delighted by the response they've gotten.

The partners have big plans. Beyond catering, which many customers have asked about, Gandy is convinced they have a concept that could work in many other cities as well.

"I designed it to be something we can duplicate," she says, adding, "I think St. Louis is the perfect place to launch just about any new concept." 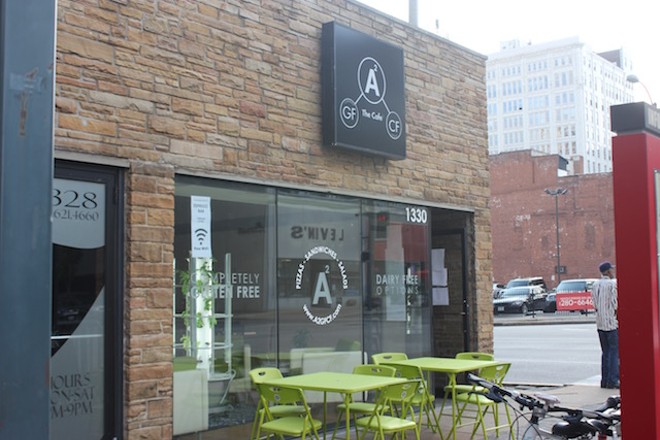 Turn the page for more photos of A2 GF CF.