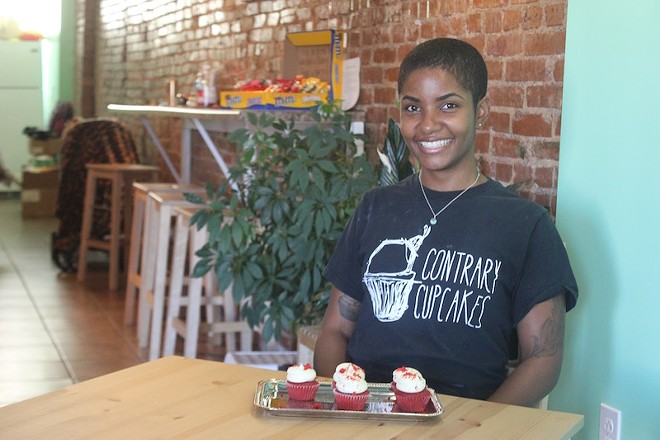 If you've ever dreamt of eating a cupcake-stuffed strawberry, you might want to head on over to Contrary Cupcakes, the shop in Southampton that proudly proclaims itself "St. Louis' only mini cupcakery." There, owner Danielle Anderson isn't just baking delicious flights of mini cupcakes. She's also crumbling up red velvet and cream cheese cupcakes, inserting them into hollowed-out strawberries, and then dipping the tip in a layer of chocolate. It's quite the dessert.

A St. Louis native who'd provided cupcakes and cakes for special events for years, Anderson found that her baking business was increasingly consuming her time — to the point that she got fired from her job at AT&T. "I just didn't have time to go to work," she admits. "It was the push I needed where I realized, 'I've got something here.'"

It took more than a year, but on the day before Valentine's Day 2016, she opened Contrary Cupcakes (4904 Devonshire Avenue, 314-797-8128) in a small shop just one block west of South Kingshighway. The space, which has previously served as a pizza shop, a barbecue joint and a bar, is light and bright, with picnic tables in front for enjoying the fresh air and four tops inside for lingering, along with a counter displaying the day's treats.

Anderson admits that she's learned a ton in the last nine months. Originally, she was intent on not having a set menu — "I liked baking whatever it was I wanted to bake, and I wanted to bring that element into the bakery." But, she learned, that was no way to plan: "I threw so much product away!"

Now she's got things down to a science. The top sellers? "Pancakes & Bacon," red velvet, and the gooey butter cake flavors, all of which sell briskly. "Lemonade" provides a tart citrus; chocolate peppermint or "Birthday Cake" work for traditionalists.

And then there are those cupcake-stuffed strawberries. New on the menu as of November 1, Anderson perfected the idea back when she was still moonlighting as a cupcake caterer. Now she's hoping her in-store customers will gobble them up.

"I'm still fine-tuning," she acknowledges. "I'm still figuring out, 'This works for us; this doesn't.' I don't want to get too settled. I want to continue to learn."