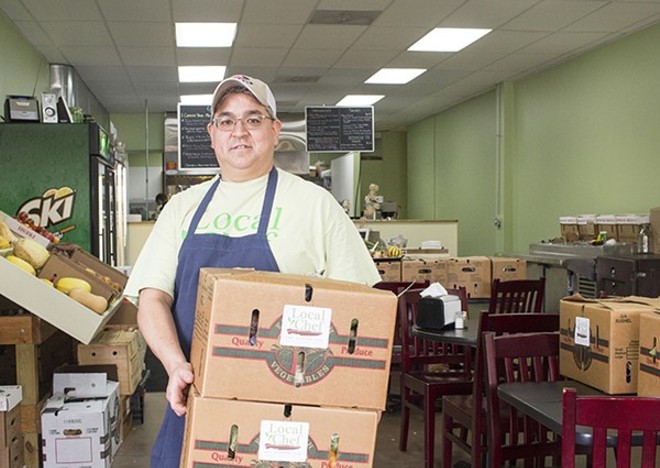 Robert Uyemura of Local Chef Kitchen (15270 Manchester Road, Ballwin; 636-220-3212) traces his love of cooking back to childhood holiday dinners with his father. "My dad used to visit us for the holidays and would cook all kinds of Asian food — egg rolls, dumplings," he recalls. "I loved it. I still thought I was going to be an accountant, though."

Uyemura couldn't deny the passion for food that he got from his father, but it didn't factor into his career plans. He realized that sitting at a desk all day wasn't for him, but still felt compelled to go to business school at the University of Iowa.

That was where he met a classically trained French chef who worked for the university — and found himself on an unexpected career path. "It was a hobby and a job for me," Uyemura says. "I started out as a cook and worked my way up to kitchen supervisor. He's the one who pushed me to go to culinary school."

Uyemura was accepted to New York's Culinary Institute of America but had to wait the requisite six months before beginning the program. He left Iowa for Dallas to be closer to his brothers and sisters and decided to pick up some kitchen gigs to hone his skills before beginning formal instruction. He worked at one of acclaimed chef Stephan Pyles' restaurants and made the connections that would later land him a job at famed Dallas restaurant the Riveria, where he worked following culinary school.

His tenure in Dallas and at the CIA were formative, but it was a gig with the former Eau Bistro in the Chase Park Plaza Hotel that brought him to St. Louis, and ignited in him the passion for local ingredients that has come to define his career.

"We did a chef-farm dinner one nigh at Eau, and as I was getting set up for that, I started hanging out at farmers markets and getting to know people," Uyemara recalls. "I was also teaching at L'Ecole, and I'd take my students to visit with farmers — many of them were city kids, so it was an eye-opener for them."

It was an eye-opener for Uyemura as well. He subsequently found himself at Yia Yia's in Chesterfield with a mission to convert the restaurant into an unlikely farm-to-table spot — well before such a phrase was trendy and before diners realized they were ready for it. "I wanted to flip Yia Yia's to using as many local products as possible, so I started with chickens from Benne's Best Meat," he explains. "People were used to the large, mass-produced birds; these were smaller and more expensive. But I took the complaints and stuck to my guns."

Uyemura converted the high-volume restaurant into a bastion of local cuisine — sourcing his produce and cheeses locally, buying whole hogs and lambs and figuring out ways to utilize every last bit — and developed relationships with local producers that inspired him to start a CSA called Local Chef. When he left Yia Yia's in 2013, he was able to focus on the CSA full time and expand his focus to include school lunch programs. He even honed his gardening skills on a one-acre plot of land at Benne's farm.

With Local Chef Kitchen, Uyemura has taken what he did at Yia Yia's and flipped it on its head: Rather than using local sourcing at an already established restaurant, Local Chef's raison d'etre is to serve as a kitchen for the CSA — a showroom where guests can see what is possible with local ingredients, as well as get a wholesome meal on the quick.

Uyemura is busy these days — he just added weekend breakfast service to Local Chef's lunch and dinner hours — but he took some time to share his thoughts on the local food and beverage community, the passion he sees in young farmers and why he's asking for a redo of his twenty-something culinary tour in Japan.

What is one thing people don’t know about you that you wish they did?
One, I’ve been a Cubs fan all my life. Two, my father’s parents were Japanese immigrants who I never had a chance to meet.

What daily ritual is non-negotiable for you?
Morning coffee. It’s just an automatic.

If you could have any superpower, what would it be?
See into the future — if the restaurant is going to be busy or not.

What is the most positive thing in food, wine or cocktails that you’ve noticed in St. Louis over the past year?
It seems like there is a younger group of people getting interested in farming and raising animals as their livelihood. They are very eager to work with chefs to provide them with products such as heirloom vegetables and heritage hogs that are outside the norm in today’s mass production.

What is something missing in the local food, wine or cocktail scene that you’d like to see?
I would like to see more truly authentic representations of ethnic cuisines that haven’t been watered down to meet the expectations of the average diner. Most people just need to be educated or shown the way to what is really the heart of different ethnic foods.

Who is your St. Louis food crush?
Not a who, but a what: I drank a lot of Schlafly’s hop samplers over the summer. I got spoiled by all the great beers I got to try at Broadway Brewery in Columbia, where I consulted for a couple of years before opening Local Chef Kitchen.

Who’s the one person to watch right now in the St. Louis dining scene?
Anyone who lives and breathes the food they are serving and loves doing it.

Which ingredient is most representative of your personality?
Salt — average and unassuming but can make or break a dish.

If you weren’t working in the restaurant business, what would you be doing?
Growing heirloom vegetables organically and raising endangered heritage hogs.

Name an ingredient never allowed in your kitchen.
Kitchen Bouquet or liquid smoke.

What is your after-work hangout?
At home to catch my boys before they go to bed.

What’s your food or beverage guilty pleasure?
Sushi and whiskeys.

What would be your last meal on earth?
A redo of my summer in Japan when I was twenty. Now that I am older and wiser I could really appreciate all the foods that I experienced that summer.