Guerrilla Street Food, the Filipino fusion spot that began as a food truck before taking the city by storm, plans to open another location on Delmar, just one block east of Skinker.

Owners Joel Crespo and Brian Hardesty hope to have the new location open this winter, they announced in a press release this afternoon.

The Delmar East location will be the concept's fourth location in less than three years. Its flagship brick-and-mortar, just off South Grand, opened in the summer of 2015 and is already joined by a kitchen inside 2nd Shift Brewing, with another planned for inside Tropical Liqueurs' long-awaited relocation coming to the Grove. 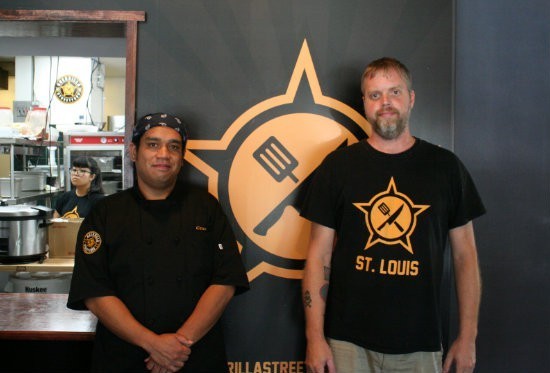 “Our ethos of Guerrilla Street Food has always been to offer approachable and affordable food for the masses," Hardesty and Crespo said in a statement. "Whether it’s with partners or stand-alone restaurants, we seek out locations that serve that goal. We’re always open to new opportunities, and we’re excited to be a part of the Loop community.”

The pair said that Heidi Hamamura would serve as executive chef for the Delmar location — which, like the others, will have some unique menu items and its own identity.

According to their statement,

Chef Hamamura grew up in the kitchen, learning alongside her father, Naomi Hamamura or “Hama-san”, one of the most esteemed sushi chefs in St. Louis. She went on to work in several different cuisines from Italian and Israeli, but she got her first exposure to Filipino food cooking alongside Filipino chef, Malou Perez-Nievera.

“I immediately identified with the home-style cooking of Filipino food,” explains Hamamura. For the last few months, she has been working alongside Chef Brian Hardesty in the Guerrilla Street Food kitchen, honing her skills in Filipino cuisine. “I think the urban street food experience of Guerrilla Street Food’s menu totally makes sense for the Loop neighborhood, and I’m excited to roll out dishes that reflect the community.”

The restaurateurs note that their Guerrilla Alliance Night Market, held in the Loop last month at the Midtown Farmers Market, sold out several dishes within hours.

The restaurant's new location is next to the Italian Restaurant Tavolo V, just east of the Pageant and across the street from the brand-new Everly on the Loop.

Jump to comments
« At Privado, Mike Randolph Offers a…  |  One Way Cafe Is Bringing Mexican Fo… »