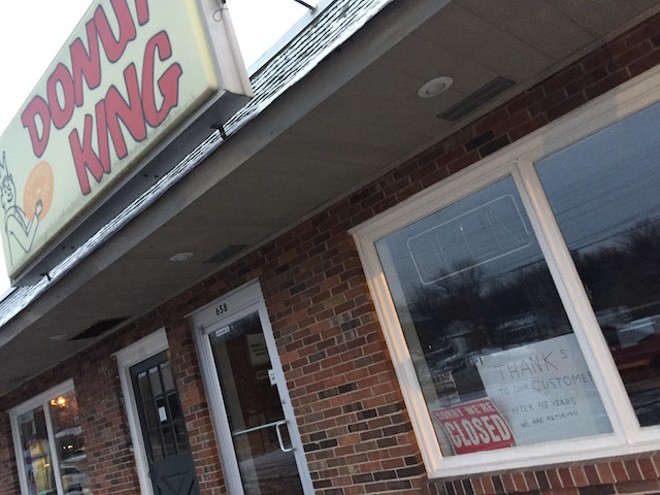 Everybody thinks they know where to find the best donuts. But unless they tasted the wares at this beloved mom n’ pop, they had it all wrong. The trouble with classic, hole-in-the-wall dives is that once you’re in on the secret, it’s hard to share it for fear of the secret getting out. If Donut-King were a band, I wouldn’t tell you about them. Their donuts were that good. ​

The shop was infinitesimal,​ with no frills​ — ​you could partially peek into the kitchen before the front door even closed behind you. Step​ ​up to the folding table adorned in plastic gingham, admire the original, 1970s wood paneling and grab a to-go box for the counter. Coffee was standard fare​ — ​styrofoam cup, a dash of cre​am​. Cash was king here. It was an old world stop from another time. There were no influx of Instagrammers. No product lines for sale. No Frankenstein​ian​ collaborations. It was a donut shop for people who liked well-made, delicious donuts, period. And​ it was cheap. CHEAP. You could walk out of there with a half-dozen and a coffee for around $5. ​

​Aesthetics aside, the donuts kept people coming back for decades. The legendary ​"​Chop-Suey​"​ was a lustrous ​bomb cyclone of a cinnamon bun. The classic glazed and ​F​rench crullers were light, airy and came with sugary glaze dripping off them. Apple fritters were gargantuan​;​ the jelly-filled overflowe​d. Powdered sugar seemed to hang in the air like snow. ​

But for my money, their classic long john ​was ​unparalleled anywhere in the donut kingdom. I’ve sampled many at different shops in different cities, but I’ve never found an equal. It was chewier than most​, ​the outside fried to a darker shade of brown​, ​with a crispness to the finished dough that gave it a texture reminiscent of sweetbread. The dark chocolate frosting was rich and sweet without being saccharine and didn’t run off the side. One was almost certainly never enough. ​

I once asked the baker how he made them, what his secret was. I think he said something about extra shortening before they’re fried? I’m not sure​; ​my concentration waned as I stuffed my face. Donut-King regularly sold out to a loyal crowd of donut denizens and fellow secret keepers. ​

​The owners didn't return my call yesterday. They weren't into self-promotion; they didn't have a Twitter account. I can only wish them a retirement chock-full of joy, just like their shop gave me. ​