Rocket Fizz in the Delmar Loop Has Closed

Rocket Fizz (6372 Delmar Boulevard, University City), a shop in the Loop known for selling sodas and candy, has closed its doors. The store broke the news to its customers on Tuesday through a Facebook post.

"Today the difficult decision was made for our Rocket Fizz to cease operations," the statement reads in part. "We want to thank our great staff and employees who showed up and served our dedicated customers." 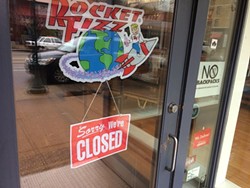 The store's inventory has all been cleaned out, and a "closed" sign hangs on the door. A small group of people were inside on Wednesday afternoon around 1:30 p.m., including Martin Baker, the store's franchisee and managing partner. Baker declined to comment on the reason for the shop's closing.

In a February 2016 article for Washington University's student-run newspaper, though, general manager Mark Strahm pointed some blame at the construction of the long-delayed Loop trolley, saying the store had suffered decreased foot traffic.

“We’re a fairly new business. We haven’t even been open for two years, and for us it was a major blow," he said. "At this point, we’re just trying to stay afloat."

Rocket Fizz was the recipient of a $4,000 forgivable loan in 2016 from University City, in partnership with the Loop Special Business District, meant to help recoup some of the costs associated with construction. That money was part of a total of $100,000 raised by the two groups for this purpose — half was put up by the city, the other half by the business group. Sunshine Daydream, Sole and Blues, Phoenix Rising and Baked T's were also among the recipients; they each received $12,000.

The Delmar Loop Rocket Fizz opened in May 2014 and was part of a national franchise based in Camarillo, California. According to its website, there are 86 stores total in the United States.

The now-closed Delmar location — which relocated from a bigger storefront last year — was the only one in Missouri. The shop suffered some turmoil last fall after a clerk allegedly maced some teens. The clerk claimed that the teens had been stealing and it appears no charges were brought.

While the shop closed after that incident, in September 2017, it reopened a few days later.