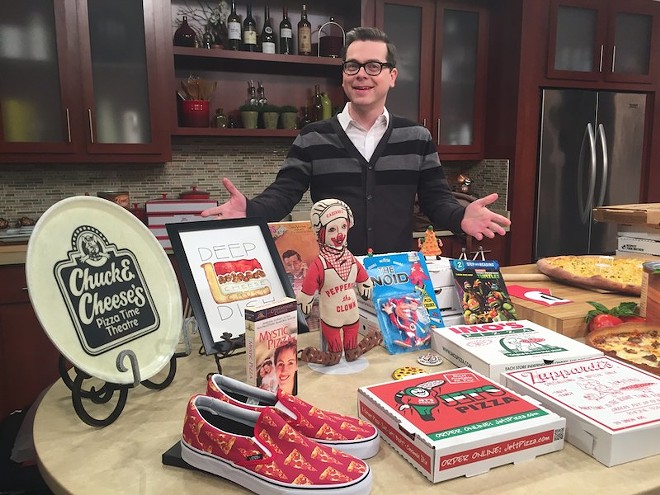 The first thing you probably want to know about the U.S. Pizza Museum, which opened last Friday in Chicago, is if it’s truly national, or if it’s just a propaganda tool for deep dish. The subtext is: Does this museum recognize other styles of pizza, like, say, St. Louis?

Yes! Yes it does! St. Louis has its own entry on the list of regional pizzas, right along with Sicilian, Neapolitan, Detroit and Quad Cities, and there’s an Imo’s box on the pizza wall of fame. Provel is mentioned, but not in a derogatory manner. It’s legit.

Kendall Bruns, the museum’s owner and proprietor, is that rare creature, a pizza agnostic. As a child, he was a picky eater, and the only food that consistently made him happy was pizza. His dad was in the U.S. Air Force and the family moved often, so he didn’t have a chance to become attached to one particular style. He loves and appreciates pizza in all its forms, and the museum is devoted to fostering that appreciation in others.

There’s wall text describing the history of pizza how it has evolved through time and geography. There are also plenty of representations of pizza, in photographs and in many other forms, including menus and boxes from classic pizza joints, board games, video games, children’s books, comic books, luggage tags, baseball caps, plastic figurines of the Pizza Inn mascot and the ShowBiz Pizza crew, sleeves from the Fat Boys’ first album and Lou Monte Sings Songs for Pizza Lovers, a DVD called The Original Video Pizza that promises “1 pizza-filled hour,” a protest sign that demands “Pizza not Patriarchy,” and a crocheted scarf that looks like a very long and very droopy slice of pepperoni. The whole effect can make a person very hungry. Unfortunately, there is no actual pizza. This made a woman who knocked on the front door one day before the museum's opening, attracted by the gigantic picture of a pizza in the front window, slightly cranky.

“You’re a pizza museum that doesn’t have pizza?” she asks incredulously.

The museum doesn’t have cooking facilities, Bruns explains. The space, located in an upscale shopping mall between a Loft and a LensCrafters, was previously a clothing store. Fortunately, in addition to his enormous collection of pizza memorabilia, Bruns possesses an encyclopedic knowledge of nearby pizzerias.

“We’re not too far from Pat’s,” he says. “Is that good? It’s really thin, tavern-cut.” He rattles off several more recommendations in other parts of town: coal-fired in West Town, Detroit-style in Logan Square, the new Roman-style place in the West Loop that sells pizza by the pound. “They have really interesting toppings: salmon, octopus.”

Soothed by Bruns’ pizza expertise and recommendations, the woman promises to come back to visit the museum after it opens. Then she disappears into the night, presumably in search of pizza.

Before Bruns moved to Chicago in 2010 from Cincinnati, all he knew about Chicago pizza was deep dish. That wasn’t what had attracted him: He was more interested in the local art and music scenes. He was, however, pleased to learn that there were many other local styles as he happily explored the city’s pizza scene, too. Then in 2012, he read an article that listed the top 25 pizzerias in the country. He realized he’d only visited two or three, which was a bit shameful for a pizza aficionado. He resolved to visit more of the places on the list. He’s also a fan of national parks — his other big project has been writing acoustic songs inspired by the various parks — and was happy to have guidance of where to eat when he traveled. Also, he says, “pizza tastes better after a long day of hiking.” He decided to collect memorabilia to commemorate the pizzerias he visited. And thus it began.

Eventually, of course, his obsession grew beyond travel souvenirs. He began hunting for pizza-related ephemera at garage sales and on Ebay. A friend who owned a toy store hooked him up with vintage games and action figures. In 2015, he began posting pictures of pieces from his collection online. The following year, he set up an exhibition at the first annual Chicago Pizza Summit, which attracted, among others, Andrew W.K. (A quote from W.K. from that event hangs on the Record Wall: “Pizza transcends food just like music transcends sound.”)

“There was such a huge positive response at the event and in the media,” Bruns says now. “I felt like I should take it more seriously.”

Bruns was disappointed to learn that the Pizza Brain Museum of Pizza Culture already existed in Philadelphia. But, he reasoned, almost every city he visited had an art museum or a natural history museum. So why couldn’t there be multiple pizza museums? He began planning more events, mostly pop-up exhibitions, and began making guest appearances on podcasts. In a public library exhibit in the suburb of Niles, he finally had room to create display text that discussed the history of pizza, both in general and in Chicago. He got to know pizzeria owners, who taught him about the craft of pizza-making and donated old menus and pizza boxes so Bruns could see how prices and toppings have changed over time. (One of his prize possessions is a 2011 menu from the late, great Burt’s Pizza, legendary in Chicago for its caramelized cheese crust and for requiring customers to place their orders a day in advance.) The storefront location seemed like a natural evolution to, as Bruns says, “display the objects that are best at telling the story we want to tell.” (Yes, he's a guy with experience working in art galleries.) 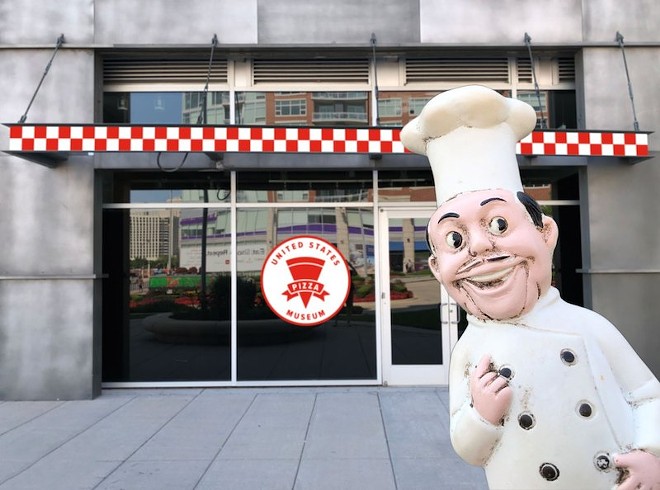 In its current form, the U.S. Pizza Museum consists of three glass display cases and three display walls, plus a small gift shop that sells, among other things, T-shirts, pizza umbrellas and pool floats, and a triangular plastic pizza holder that you can wear on a lanyard around your neck.

Bruns stores the remainder of his collection in a back room, and he may add more items during the museum’s run, which will last at least until October, depending on the number of visitors.

“I don’t think people understand how complicated pizza can be,” Bruns says. “It seems to be a simple thing, but you think about how it needs great dough, sauce, and toppings, plus the way it’s baked, and you realize how much craft goes into making it really well. When it’s good, there’s nothing better. The U.S. Pizza Museum celebrates all forms of pizza. It isn’t about us telling people what to like. We want other people to till us what they like. It’s not about ranking. I want to shine a spotlight on the craft. I love so many different kinds, I wouldn’t want to pick just one.”

Although some forms of pizza get more attention than others — New York style because it was the first on these shores, deep dish because Chicagoans feel as strongly about Uno’s and Lou Malnati’s as St. Louisans do about Imo’s — true to Bruns’ philosophy, all pizzas are treated with equal love. St. Louis pizza, for instance, “features Provel, a processed cheese blend of cheddar, Swiss, and provolone with a low melting point that gives it a gooey texture.” See, not derogatory at all!

On a recent trip to St. Louis, Bruns sampled several local pizzerias, including Imo’s. He claimed to like them all. When pressed, however, he confessed that his favorite slice was the vegan offering at Pizza Head. “It was amazing,” he says. “If I went back there, that’s the slice I’d be ordering.”