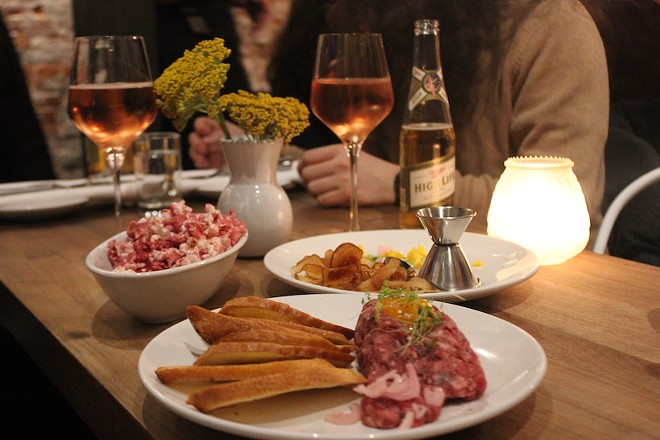 The prolific restaurateur (Rooster, Baileys' Range, Small Batch) unveiled the sparkling wine bar in a dramatic way, inviting the media and friends of the establishment to witness as the space transitioned from a New Orleans-influenced eatery to a bar and restaurant focused on sparkling wines. Throughout the three-hour event, servers replaced Louisiana-style touches with Pop art — and Bailey himself provided a personal narrative.

He said the previous restaurant concept had been chosen in part for a TV pilot. "At the end of the day, L'Acadiane was not what I had my heart set on for this building," he told the crowd. "But it helped get the transition going."

As Bailey explained, a little over a year ago, he converted his very first restaurant, Baileys' Chocolate Bar, into L'Acadiane, moving the chocolate bar upstairs. Doing that meant finally adding a full kitchen, and that jumpstarted the redefinition of the space that led to Pop.

Now he intends to serve a full menu that pairs well with Champagne and sparkling wine — and he showed off a host of new dishes with that aim. That means small plates including a classic beef tartare ($12) that combines flap steak with egg, pickled shallot and a crostini, as well as a terrific focaccia topped with capicola, iberico and an arugula pesto ($13).

There are also a host of snacks — caviar, popovers, pickles or olives. But for those in the mood for dinner, Pop intends to serve just that. Try the carbonnade, a classic beef-and-onion stew atop noodles. Or what may well be the tastiest thing on the menu, a chili-cured duck breast served with carrots and a beet gastrique ($21).

For all the drama of the sudden closure/dramatic new opening, Bailey himself was a charming, low-key presence. "Twenty-four years ago I kind of fell into the restaurant business," he said. Then he explained that he'd met his wife Kara while working at Sasha's on De Mun and, yes, drinking sparkling wine.

Of sparkling wines, he said, "They're for the every day, not just for special occasions, not just New Year's Eve. They're for Thursday." 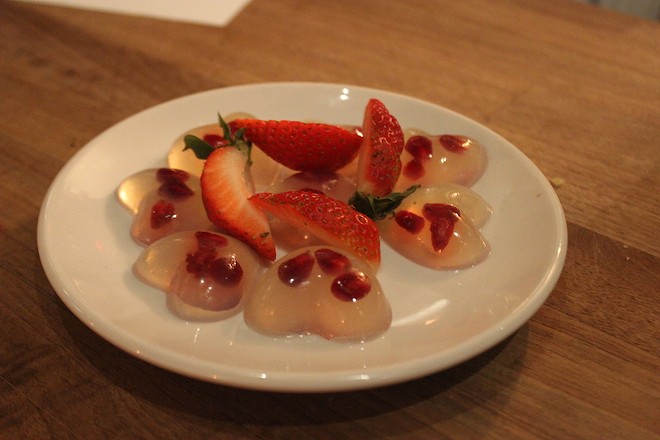