Vicia's Michael Gallina Had to Leave St. Louis to Fall in Love With It 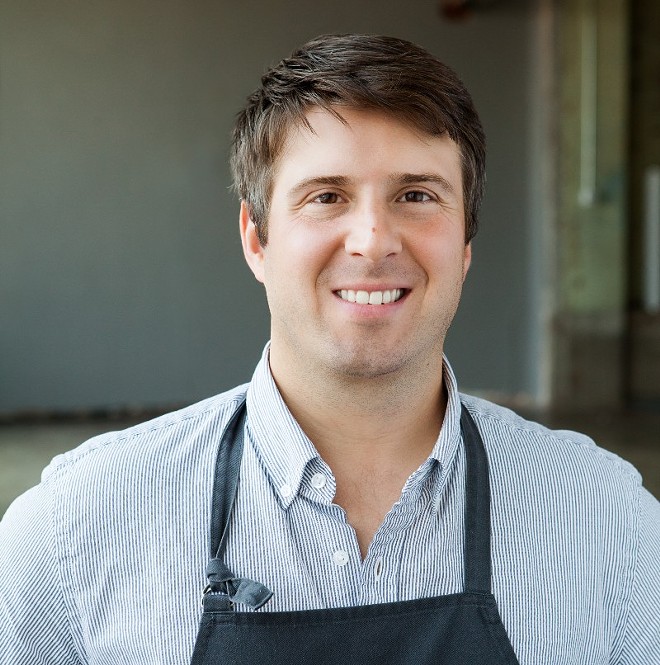 Chef Michael Gallina can pinpoint the exact dish that made him fall in love with cooking. It was Yorkshire pudding, a specialty he made with his grandfather every year for the holiday meal. His grandfather was a fantastic cook, and together, they perfected the recipe — they just never perfected the logistics of cooking it.

"We set off the fire alarm every year," Gallina laughs. "Every Christmas, it was the same thing. The Yorkshire pudding was just dripping in beef fat, and there was always this madness and craziness when we were cooking it. You'd think if we were smart we would've changed how we did it — at least take the batteries out of the smoke detector."

Today, it's hard to imagine a chef as accomplished as Gallina having such troubles in the kitchen. As chef and owner of the acclaimed Vicia (4260 Forest Park Avenue, 314-553-9239) and an alum of such revered establishments as Eleven Madison Park and Blue Hill at Stone Barns, Gallina has made a name for himself as one of the best at his craft.

However, as a kid growing up in Brentwood, Gallina did not see cooking as his path. Instead, he obsessed over baseball until he graduated high school and realized he was not at the level to play in college, let alone the majors. Not knowing what he wanted to do with his life, Gallina enrolled at Webster University and then Mizzou, where he describes himself as adrift.

"I clearly remember sitting on the balcony of my apartment in Columbia one day and thinking, 'What the hell am I going to do?'" Gallina recalls. "I'd gone to California the summer before and fell in love with the Bay Area. I wasn't happy at Mizzou, and all I could think of is how I could get back out there."

Gallina thought back to the things that made him happiest as a kid. Growing up with working parents who did not have a lot of time to cook, he often found himself in the kitchen making basic things like grilled chicken. He even found joy in the simple act of building a sandwich. He realized he had a real passion for food — and that culinary school could be the answer.

Though his restaurant experience had been limited to bussing tables at Hacienda and prepping food at the former Rendezvous Cafe in the St. Louis Galleria, Gallina was able to get into the California Culinary Academy in San Francisco. There, everything clicked almost immediately, and he realized he'd found his path.

After an externship at Tony's in St. Louis and a stage opportunity at Spiaggia in Chicago, Gallina found himself back on the West Coast with an opportunity to stage at Bouchon. While there, a friend told him that a restaurant in San Francisco called Campton Place might be hiring. Gallina drove down to the city and found himself chatting in the kitchen office with the acclaimed chef Daniel Humm, who told him he would call the minute a job opened up.

Two weeks later, Gallina was on the line at Campton Place.

"It really defined my focus and thinking about how you work on a kitchen team and push for something," Gallina says. "When I got there, he was working on his first review with the San Francisco Chronicle, and the energy and drive of working hard for something really sparked me at a point in my career where I was green. Meeting chef Humm really took me over the edge of falling in love with food."

Gallina followed Humm to New York City, where he worked for him at the revered Eleven Madison Park. During his time off, he became a regular at Dan Barber's restaurant Blue Hill, and became friends with the staff there. Those relationships would turn into a job offer when Gallina found himself being interviewed by Barber in some odd circumstances.

First they toured Stone Barns, Barber's restaurant in Tarrytown, New York, and had a meal there. But then, Gallina recalls, "The next thing I knew, I was sitting in the backseat of Dan's minivan with his longtime cook Manuel and a whole pig between us. Dan was driving and interviewing me at the same time."

Gallina worked for Barber for eight years in a job that would not only define his culinary philosophy but also alter the course of his life. At Stone Barns, he fell in love with his now-wife Tara, who would end up inspiring him to return to St. Louis by helping him see his hometown in a different light.

"I never saw myself returning to St. Louis. I'd grown up in Brentwood and it felt like I was in a county bubble because we never really went out," Gallina explains. "But when I started coming back to visit with Tara, she pushed me to check out other things that were happening. That's where I met Gerard [Craft], and saw places like Olio and what Kevin Nashan was doing at Sidney Street Cafe. It really made me realize what a good food scene there is here."

As Gallina says, the rest is history. He and Tara packed up and moved back to St. Louis in late 2015, where they put on a series of pop-up dinners under the name Rooster and the Hen before opening Vicia in March 2017. Since then, the restaurant has received numerous awards and critical acclaim.

Gallina appreciates that, though his happiness is rooted in simpler things.

"It made sense for us to lay a foundation somewhere that we could be a part of a community," Gallina says. "We felt like we could really make our mark here. Plus, it's a good place to raise a family." Adds the new dad, "My mom is incredibly proud, and she gets to help with the baby."

Gallina took a break from the kitchen — and dad duties — to share his thoughts on the St. Louis restaurant scene,

What is one thing people don’t know about you that you wish they did?
I love watching Guy’s Grocery Games after work to unwind! I have no desire to do TV cooking competitions, but that one is probably my favorite to watch.

What daily ritual is non-negotiable for you?
Spending some quality time with my daughter, Olivia, and my wife, Tara.

If you could have any superpower, what would it be?
Being in two places at the same time.

What is the most positive thing in food, wine or cocktails that you’ve noticed in St. Louis over the past year?
Seeing more chefs and independent restaurants using local products and supporting farms in creative ways to prevent waste.

What is something missing in the local food, wine or cocktail scene that you’d like to see?
A spot to get a really good bacon, egg and cheese bagel (I miss them from my days in NY).

Who is your St. Louis food crush?
Even if she wasn’t my wife, it would be Tara Gallina. I am so impressed by what she has been able to achieve with the quality of hospitality and service at Vicia. She has really raised the bar on what a dining experience can be. The fact that she is still so on top of everything that goes on every day while being an amazing mother to Olivia at the same time really blows me away. Food is, of course, important, but I think people underestimate how crucial a great front-of-house team is to a restaurant, and I think we have one of the best in town.

Who’s the one person to watch right now in the St. Louis dining scene?
It’s a tie between Logan Ely of Savage and Aaron Martinez of Elaia. I’ve had the opportunity to work closely with both of them — Logan back in New York and Aaron at Vicia — and I think they are both going to move the scene forward in exciting ways.

Which ingredient is most representative of your personality?
A coconut. My exterior can be hard and tough, but I’m tender and sweet once you crack me open!

If you weren’t working in the restaurant business, what would you be doing?
Working in baseball in some capacity.

Name an ingredient never allowed in your restaurant.
I’m pretty open-minded to most things; I just dislike anything that's super processed or artificial.

What is your after-work hangout?
Being at home spending time with my family is my usual hangout, but if I get the chance to get out early, I like hanging out at Rockwell and grabbing a beer and a Braswell burger.

What’s your food or beverage guilty pleasure?
Clementine’s "Salted Crack Caramel" or the "Blackberry Buttermilk" when it’s in season.

What would be your last meal on earth?
Union Loafers pepperoni pizza with a side of buttermilk ranch and the Italian salad.