Extra! Extra! Drink all about it! Old Herald Brewery and Distillery (115 E. Clay Street, Collinsville, Illinois) is now located in the former home of the Collinsville Herald. The newspaper's huge building sat vacant for more than twenty years before Derik and Whitney Reiser purchased it in 2017. After two years of renovations, the Reisers opened their brewery on January 4.

But Old Herald is more than just a brewery. It's also a tap room, restaurant and distillery. In fact, it's the first brewery/distillery combo in the Metro East and only the second in all of Illinois. Located only steps away from Collinsville's lively main street, it's a fun addition to Collinsville nightlife — and a newspaper-themed destination that should attract visitors from the other side of the river.

The bar and restaurant area seats 120. Adjacent is a cocktail lounge with board games and rustic chic decor, while through the doorway is an event space that seats 80. A biergarten will be opening adjacent to the building this summer.

For decor, you can find art including giant typewriter letters, old newsboy photos and more.

The couple had been home-brewing for more than 30 years before making this big step. "I wanted to bring my craft experience into the spirits world and make craft distillery right," says Derik Reiser.

They hired Torin O'Brien, previously of Perennial Artisan Ales and 12Degree Brewing in Louisville, Colorado, to run the brewing operation.

The beer line-up includes six approachable brews; the American Pale Ale, Saison, Rye Saison, an IPA, Printer's Ink (black ale), and a Kölsch. Derik Reiser explained that ten percent of profits made from the Kolsch is donated to the restoration of the 100-year-old Miner's Theater in Collinsville.

As far as the spirits go, they distill under the name Ardent Spirits Inc. Within the Old Herald complex you can sip house-made rum, gin and agave spirits. These smooth spirits are made easy to drink straight or mix.

Ardent Spirits won multiple awards at the San Fransisco World Spirit Competition — "the Grammys of the spirit world," according to the Reisers.

The brand name comes from the property deeds establishing Collinsville in 1837. The deeds apparently included a clause requiring landowners who produced "ardent spirits" to forfeit their land.

That's not the only local homage. Collinsville happens to be the horseradish capital of the world, even if those passing through know it by its giant ketchup bottle. Ardent Spirits is working on perfecting its horseradish vodka just in time for the horseradish festival in early June. (Just please, no ketchup vodka!)
There is a full food menu. "We try to keep it from-scratch and local while we partner with local producers," says Whitney Reiser.

Expect upscale food at a reasonable price, with no entree over $18. Enjoy favorites such as fish and chips, which are grain-battered from in-house brewing, or the "Old Herald Fries," a riff on poutine loaded with braised beef cheeks, brown gravy and garlic herb cheese curds. 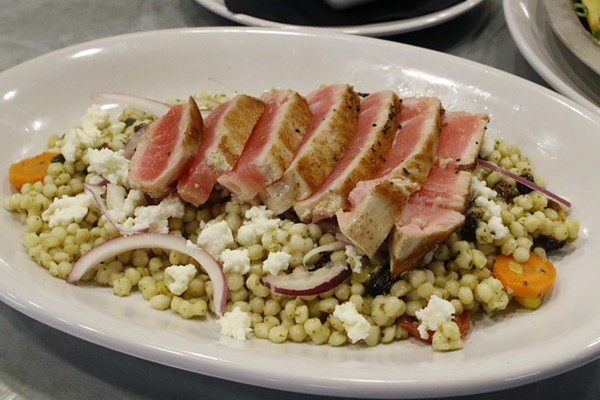 It's not all hearty pub food, though. The seared tuna couscous salad is served with roasted squash, dried currants and marinated tomatoes tossed with chimichurri vinaigrette and topped with feta cheese and red onion. And for dessert, you can grab a "Beeramisu," a beer doughnut or a chocolate stout brownie.

The Reisers have big plans in the works such as distributing Arden Spirits and Old Herald beer to other local bars, a new food menu for spring and our favorite six letter word — brunch.

Jump to comments
« Hi-Pointe Drive-In Opens in Downtow…  |  With Naturdays, Natural Light Gets… »