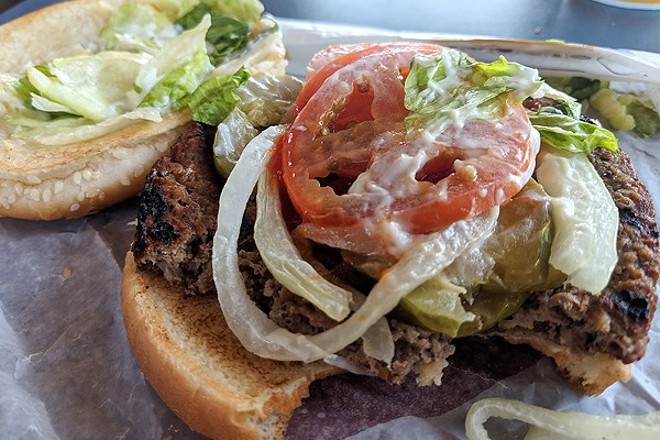 Ever since the Impossible Whopper's surprise launch on April 1, the wonder of the meatless burger's very-meat-like taste has been a boon — to St. Louis, which was selected as the sole test city for BK's tasty experiment.

For the last 29 days, we have had something no one else had. We were the only place in all of America you could get the Impossible Whopper.

However, in a shameful but expected act of capitalism, the company is now planning to make the Impossible Whopper part of its menu nationwide.

And for that, we can take some credit for being the forward-thinking, plant-loving, food-focused city we all know ourselves to be. The Impossible Whopper test in St. Louis went "exceedingly well," a Burger King spokesman said in a statement reported this morning in the trade publication Nation's Restaurant News, announcing the company's decision to wrench from St. Louis its most recently established regional delicacy and make it something common.

The statement noted, "Burger King Restaurants in St. Louis are showing encouraging results and Impossible Whopper sales are complementing traditional Whopper purchases" — suggesting that vegetarians are now visiting the place with their meat-eating friends, a tide that lifts all burger boats. (Or maybe everyone's just doing side-by-side comparisons, like us?)

Granted, the Impossible Whopper is really tasty and demonstrates that meat alternatives can work even in the fast-food market. It's hard to blame the company for rolling it out nationwide.

Still, for these past four weeks, St. Louis' was the center of the Impossible Whopper empire, where each fortunate citizen could thrill at the knowledge that eaters all over the country, from the posh L.A. gastropubs to the elite New York pizza basements, were thinking jealous thoughts about St. Louis' exclusive food offerings.

Anyway, we don't need the Impossible Whopper to be special. We'll always have Imo's. Can't get that in San Francisco.

As for the Impossible Whopper, the nationwide roll-out is expected to hit non-St. Louis locations by the end of the year.