At Russell's on Macklind, Faron Huster Lives for the Rush 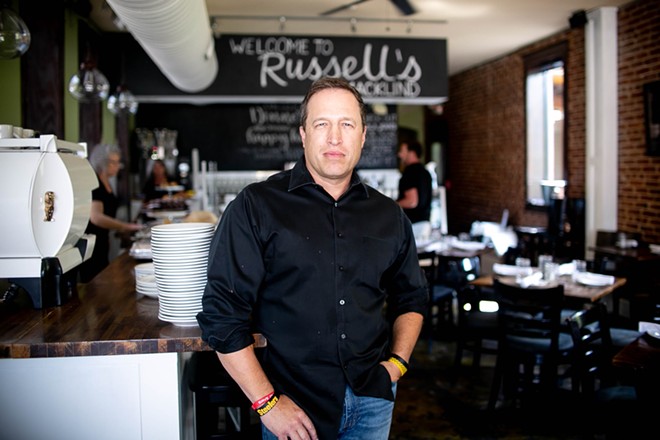 Faron Huster didn't set out to have a career in restaurants some 30 years ago when he got his first job in the business. He was simply looking for a way to pay the bills after leaving his soul-crushing forklift operator gig for broadcasting school. By day, he worked in the meat department at Schnucks; afternoons were filled with school, and when evening came, he was a bouncer at a nightclub in west county. Then, fate intervened.

"The GM at the nightclub where I was working got fired one day, and the owner looked at me and said, "You look like a responsible guy. Why don't you take over?" Huster recalls. "The next thing I knew, I got a set of keys and an alarm code."

Now general manager at Russell's on Macklind (5400 Murdoch Avenue, 314-553-9994), Huster traces that impromptu promotion as the start of a restaurant career that spans three decades. It wasn't his intention to keep going with it, but he instantly felt the pull of the industry's energy as he worked his way through several different kitchen and bouncer jobs with that initial company.

Even when Huster moved from St. Louis to the southwest, he found himself in the industry, running clubs in Texas and Arizona. When a then-girlfriend told him she was moving back to St. Louis to take a job with the soon-to-open Harrah's Casino in St. Charles, Huster followed her back to his hometown. He got a job with the casino as well and worked there for roughly five years before he felt it was time to move on.

"I got really bored with the corporate side of the business," Huster explains. "Everything is by the book, and there is no creativity."

Huster had a friend who was making a good living at the now-shuttered Harry's Restaurant & Bar downtown, and that connection landed him a job at the legendary hotspot. He loved the job and worked there for five years, but eventually, he felt like he was growing out of the scene and needed to find another path.

Huster stepped away from the restaurant business for eight years, during which he launched both a marketing company and a software business. He enjoyed a good amount of success in both, but that wasn't enough to keep him from missing the industry.

"I missed the rush," Huster says. "Everything I was doing was mundane. I mean, I was exciting because I was trying to create something out of an idea, but I really missed those moments of getting my ass kicked and pulling together with a group of people. I'm a high-energy person, so I have to be in the center of activity."

Huster returned to restaurants when he got a job at the former 3500 Winehaus and threw himself into the work he loved. Eventually, though, he wanted more and found that when he interviewed for a management position with Russell Ping, who was getting ready to open a new restaurant in the Southampton neighborhood. He and Ping instantly hit it off, and Huster was hired as the first employee at what is now the wildly popular restaurant, Russell's on Macklind. He's never looked back.

"Russ is an incredible chef, and we've built a fantastic staff," Huster says. "One of the best compliments I've gotten is when a customer said the place feels like a big warm hug. I'm not going to get rich and buy an island, but I love what I do. It's frustrating at times, but I love it and feel very fortunate to be here."

Huster took a break from Russell's to share his thoughts on the St. Louis restaurant scene, why he likens himself to a good bourbon, and the importance of working out when it comes to his job.

What is one thing people don’t know about you that you wish they did?
I am the father of three great kids. My daughter is 27 and married, and I have identical twin 15-year-old sons that just started 10th grade at Marquette.

What daily ritual is non-negotiable for you?
No question: the gym. I have been weight training since my freshman year in high school. I love the discipline and dedication it takes to get there consistently. When I’m surrounded by all of the wonderful cakes, cookies and baked goods each day here at Russell’s, I have no choice but to keep working out.

If you could have any superpower, what would it be?
Does slinging webs from my wrists count? If so, that seems cool.

What is the most positive thing in food, wine or cocktails that you’ve noticed in St. Louis over the past year?
Not necessarily the last year, but it's the sourcing of local products that we use. We have great relationships with many local purveyors and producers.

Who’s the one person to watch right now in the St. Louis food scene?
This is going to sound self-serving, but honestly, I'm going to say our owner/chef Russell Ping. For the quality and creativity of our menu and bakery items, I don’t think many in town can touch what he does. I don’t think he gets the recognition or accolades that he deserves.

Which ingredient is most representative of your personality?
A good quality bourbon: smooth, with a little bit of an edge.

If you weren’t working in the restaurant business, what would you be doing?
Farming. I grew up in the country and my brother and I own 170 acres on the Iowa-Illinois border. Being there keeps me connected to my roots.

What is your after work hangout?
Honestly, at this point in my life, my couch. Believe me, it’s a helluva lot easier waking up the next day than it used to be.

What’s your food or beverage guilty pleasure?
Basil Hayden on the rocks.

What would be your last meal on earth?
Crawfish Etouffee from Broadway Oyster Bar and an ice cold Stag. I'm a simple man but that's definitely my go-to dish!