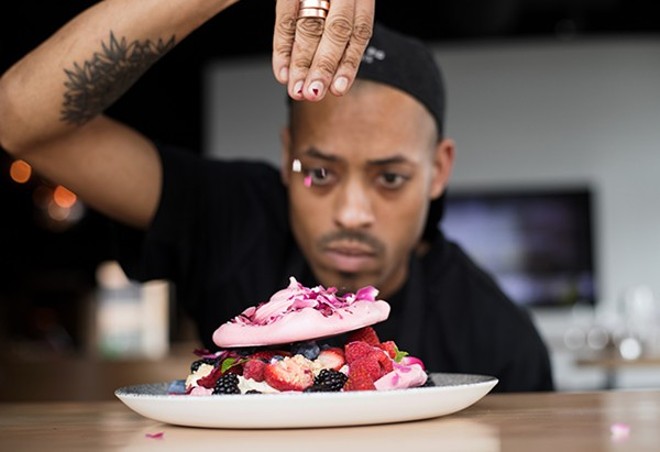 A magnificently plated dish is as much a feast for the eyes as it is the stomach. And if anyone knows a thing or two about magnificent plating, it's chef Tyler "Tai" Davis, who has made a name for himself in town at restaurants such as the Chocolate Pig and the now-shuttered Element.

In Davis’ new coffee-table book, Tai Davis [Pastry]: A Visual Anthology of Culinary Works, food lovers can explore the inspiration and emotion behind the chef's culinary artistry. On Saturday, December 14, Davis will be setting up at Left Bank Books (399 North Euclid Avenue, 314-367-6731) for a discussion about the book and a signing.

The event gets underway at 4 p.m. and attendance is free and open to the public. Davis will be discussing the contents of his new book, answering questions and signing copies, which are available for purchase in advance or at the event.

Davis has been a rising star in the culinary world of St. Louis since the start of his career in 2010. Over the years his profile has steadily risen for both his restaurant work and his three-tiered pastry business, which sees him dividing time between restaurant consulting, catering and artistic pursuits. He has also been featured on Food Network's Halloween Baking Championship, and next year, he will return to his roots as a savory chef with a monthly soul-food pop-up series dubbed Elevated.

For now, though, tickets to the talk and book signing can be purchased through Left Bank Books' website.