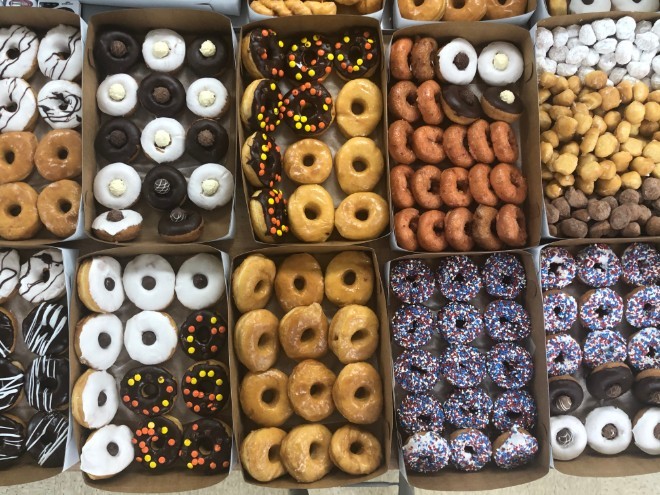 For the last couple of years, Jamil Jabbar has been planning to open a bagel and doughnut shop with the idea of having both a storefront and robust distribution business. Now that it's happened, he can't do anything but laugh at his timing.

"I didn't know we were going to be in a pandemic the first month of opening," Jabbar says. "If I knew, I definitely would have waited a year."

Jabbar opened his shop, Boogyz Donuts (6951 Olive Boulevard, University City; 314-354-8553) on January 31 in a small strip mall on the eastern side of University City. As he explains, the idea for getting into the business came to him while managing his brother's gas station, where he saw customers clamoring for doughnuts its convenience store stocked daily. He figured that if he could make doughnuts and sell them to local gas stations and convenience stores, he'd be able to capitalize on that demand.

The decision to become a doughnut-maker was not that much of a stretch for Jabbar. Four years ago, while vacationing in New York, he fell in love with the city's bagels and decided to learn how to make them. That journey took him to New York twice, where he perfected the art and made plans to bring his knowledge to St. Louis to begin making bagels.

He began selling the bagels at the gas station where he worked, but he noticed that doughnuts outsold them four-to-one. Seeing how popular they were, he shifted his focus to doughnuts, learning the craft from the owners of the Florissant shop, Kelly's Donuts. Once he perfected his technique and recipes, he figured it was time to strike out on his own.

Not one to let adversity stop him, Jabbar has had to get creative during the downturn caused by the pandemic. With distribution business virtually nonexistent, he's begun to focus on creating specialty products to draw in customers to his shop, such as vegan doughnuts, which he makes every Tuesday. As he explains, he didn't know whether or not the idea would fly, so he's been amazed with the success he's seen.

"I didn't know if vegan doughnuts were going to work, because I didn't know the community was that large," Jabbar says. "The first day I did them, I was just shook. I was busier that day than I was on my grand opening. I felt like, 'Wow, people are coming from left and right.' It's a blessing."

With Boogyz closed on Mondays, Jabbar is able to ensure that there is no cross-contamination between his vegan and non-vegan offerings on Tuesdays, thus guaranteeing that his plant-based customers have the security of a truly vegan product. Unlike most doughnut shops, he drains and throws away his used oil every Sunday, so that when he comes in on Tuesday, he has a fresh product. Plus, he is careful about sourcing everything from sugar to icing ingredients to make sure his doughnuts are completely vegan.

Emboldened by his success with his vegan offerings, Jabbar has a few other creative ideas he's working on to differentiate himself from the competition. Soon, he will be carrying a line of vegan cheese and crackers, and he's launching a line of dog doughnuts this week.

"I'm having good days and bad days just like everyone else in the business," Jabbar says. "But I am always wanting to grow and try something different."