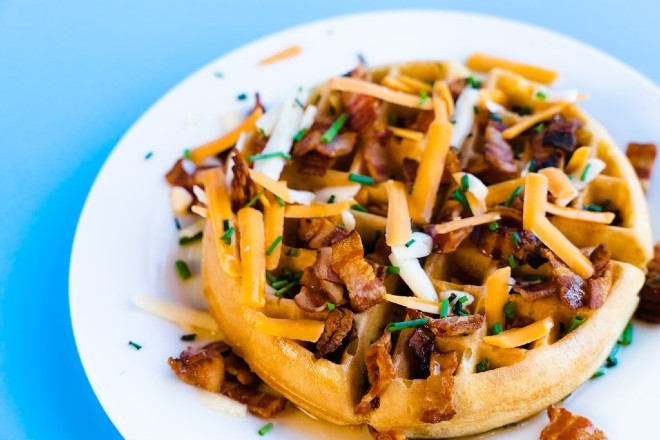 Even before he opened the doors to his original location of Boardwalk Waffles & Ice Cream (7376 Manchester Road, Maplewood; 314-449-1209) in 2017, Eric Moore dreamed that brunch service would be part of his business model. Now, he's making that vision a reality at his Maplewood restaurant with the launch of weekend brunch, which begins this Saturday.

"This is the third piece of the trifecta — brunch, live music and liquor," says Moore. "It was always in my head to put these together with the single concept of the waffle once I got a bigger space. Now that we have it, this is the final piece of the puzzle."

The newly launched brunch offerings at Boardwalk Waffles & Ice Cream include savory dishes, such as the Spicy Mexican, a jalapeño cornbread waffle topped with cheddar cheese, chorizo, cilantro and spicy maple syrup, as well as the Bacon Cheddar Chive waffle paired with maple syrup. Sweet selections will also be available, including the Chunky Monkey, which pairs a chocolate waffle with bananas, chocolate syrup, walnuts and either maple syrup or a banana-liquor-infused syrup (adults only!). Another grown-up dish consists of a waffle topped with bourbon-soaked apples and walnuts.

In addition to the food, guests can enjoy cocktails and live music during brunch at Boardwalk Waffles & Ice Cream. Boozy options include bottomless mimosas, liquor-infused shakes, Irish coffee and bloody marys. Brunch service will run Saturdays and Sundays from 7 a.m. until noon.

"The shop itself if whimsical — you walk in and it's like nowhere else in town," Moore says. "We're staying with that idea of fun with our brunch. When you come here, you know what you are getting."

The restaurant's fast-casual setup will remain in place during brunch. Moore says that, though he wants people to enjoy themselves and take in the atmosphere, he believes that the counter-service setup and moving line will prevent people from congregating, something he is concerned about because of the pandemic. Though he anticipates people will have to wait in a modest line to have their orders taken, it will not be the two-hour wait at a host desk as is typical of weekend breakfasts and brunches.

It's been a busy year for Moore, who has been expanding the Boardwalk Waffles & Ice Cream brand to include additional locations in Grand Center and south county. Though he has not formalized any arrangements, Moore is also considering franchising the brand thanks to several inquiries from interested parties in Florida and New Jersey. In the meantime, he's taking things one step at a time in the hopes that what he creates now with brunch service will be a template for the brand moving forward.

"Everybody raves about our waffles, so we figure why not take it up a notch and expand on that to fill a void on weekends," Moore says. "People want to go out for brunch again, and the idea that you can get in and out at a reasonable pace for a reasonable price is what we want to offer."