St. Louis Standards: O'Connell's Is the House that Jack Built 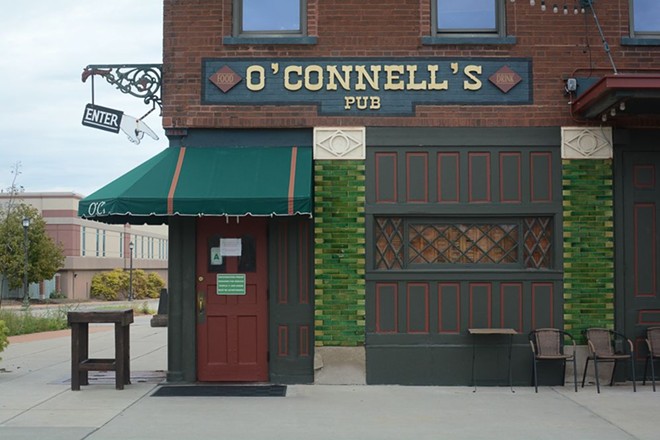 John Parker can talk at length about O'Connell's Pub (4652 Shaw Avenue, 314-773-6600), about the cast of characters who have tended its bar and served its burgers, the ragtag crew of regulars who have sat at its bar, and, of course, that one night Allen Ginsberg came into the original Gaslight Square location and held court with his entourage, spinning poetry and pronouncing the realities of the world.

However, if there is one thing he wants you to know about O'Connell's, it's that this is the place Jack Parker built.

"Every bar or restaurant is a reflection of its owner," says John Parker, Jack's son and now the proprietor of O'Connell's. "To know O'Connell's is to know the story of Jack Parker. If he was going to own this place, he was going to do it his way."

Jack Parker may have been the heart, soul, captain and owner of O'Connell's for many years, but surprisingly, he was not the original owner. Neither was anyone named O'Connell. Back in the 1950s and '60s, the city's Gaslight Square neighborhood was considered to be the premier entertainment and nightlife hub of St. Louis, with bars, restaurants and clubs populating the area near Olive and Boyle in the Central West End, creating a district many considered to be the Greenwich Village of the Midwest. Two businessmen wanted to capitalize on the area's popularity by opening an Irish bar, so they reached out to Jack Parker's parents' au pair, who was from Ireland, to consult on the place. She proved so instrumental in the development of the bar that the men wanted to name it Rita Ryan's after her. She insisted that was a bad idea, and told them to name the bar after Daniel O'Connell, who was considered one of Ireland's liberators. They took her advice, and opened their bar, O'Connell's, in 1962.

From the get-go, Jack Parker was a presence at O'Connell's, pouring drinks, grilling up burgers behind the bar and generally running the place. It was a departure for the south St. Louis native, who used to sell cars on South Kingshighway and run around Gaslight Square. His interest in the arts was sparked by his former roommate, artist Ernest Trova, who used to blast opera and experiment with his craft in their meager arts loft apartment, where Jack used to sleep on the floor on an old mattress. Passionate about art, music, poetry, literature and everything in between, Jack Parker brought that spirit with him to O'Connell's and cultivated the bar as a welcoming space that was inclusive of everyone.

After a few years, the men who started O'Connell's wanted to get out of the business and sold the bar to Jack for $1,500, an amount it took him three years to pay back. However, with his trained bookkeeper mom helping him manage the financial side of the business and his natural penchant for creating community — plus making darn good food — Jack Parker was able to translate that investment into success, eventually moving the bar to its current home on South Kingshighway in 1970, following the decline of the once vibrant Gaslight Square.

In its new digs — just as in its old ones — O'Connell's became less about the bar itself and more about the motley crew of characters that filled its four walls. There was (and still is) Lenard Voelker, the bartender who came in one day as a replacement for his predecessor and was asked by Jack, "Do you work for me?" followed by, "Alright, how much am I paying you?" Nora McDermott, the server from Tanzania, also started in the Gaslight days and worked alongside Jack for decades, as did Red Garner and Ken Thone, two longtime bartenders that were considered masters of their trade before anyone dared utter the word "mixologist." But it wasn't just the staff who animated the bar; Jack Parker was determined to create an environment that made everyone feel comfortable, no matter what walk of life they came from.

"Back in the 1970s, there was R&F Spaghetti across the street and Banner Iron Works across the alley that went behind the building," John Parker explains. "The R&F and the Banner guys would come in for lunch to eat roast beef sandwiches and drink a pitcher of beer, but the symphony guys and the artists followed us here from Gaslight Square, so we had this mix of the arts community and the south-city working class. We'd have regulars who were iron workers sitting next to some guy who played oboe in the symphony. The mix was natural, and that continues to this day."

When Jack Parker passed away last June, the keys to O'Connell's were passed to John, who knows that it's his mission to keep the bar's spirit alive as a way to honor his dad. He has a couple of plans up his sleeve — a much-needed POS system, an old-school City Museum-style installation of an antique iron archway and a sculpture meant to honor founder Bob Cassilly, to name a few — but, aside from a deep clean when he reopened the doors last August following his dad's passing, he insists his strategy is to stay out of the way of O'Connell's success.

"If you work here you've seen a lot of change, but if you're a customer, nothing's changed," John Parker says. "Everything is the same, the moose is still there; nothing has changed. That is the main concern I hear from everyone. They always say, 'Oh, I'm so glad you are open again,' and I know before they say anything else to tell them not to worry because I'm not going to change a thing."

Parker is happy with his role as steward of O'Connell's, and has spent the past year navigating not only the grief of his dad's passing but also the challenges the pandemic has thrust upon his industry. Insistent on weighing public health and safety above all other concerns, he's been fierce in his commitment to keeping O'Connell's a safe place for his guests, and feels that his policies are in line with the bar's only rule, which his dad established many years ago: You must behave in a civilized manner and be courteous of your fellow patrons. He admits it hasn't been easy, but he is committed to keeping O'Connell's going for the long haul. What makes it easier is knowing that he is not alone in his quest, but that he is aided by the memory of his dad, which still animates the place, as well as the employees and guests who have made it what it is.

"O'Connell's Pub is made by the people who come here, and you can't buy that or make that artificially," Parker says. "That's who really owns the place. It's intangible, and you can't own that vibe. It's what makes this a sacred house — one that is sacred to me not just because we are the best bar or have the best burger in town, but because it's the house that Jack built. It's the reflection of him, and I am going to do what I can to honor that for him." 