Exclusive excerpt from The Might Have Been by Joseph M. Schuster 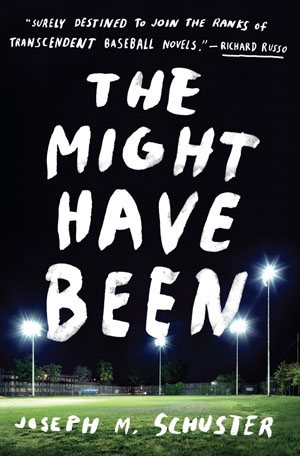 Joseph M. Schuster's first novel The Might Have Been is available for pre-order at Amazon.com

By now you've probably met Joe Schuster, the writer, Webster University professor, ardent St. Louis Cardinals fan and subject of this week's feature story, "Coulda Shoulda Did." So you probably know that Schuster has a long-standing fascination with professional baseball players who had microscopically short major league careers and that he spent nine years writing a novel whose protagonist, Edward Everett Yates, spent three weeks with the Cardinals in the summer of 1976 before a freak knee injury doomed him to obscurity. Some men get over this and go on with their lives in what Edward Everett and his ilk refer to as "the World." Edward Everett, though, is not one of them. Now pushing 60, he's still in pro ball, albeit barely, managing a low-level minor league team in a dying Iowa town, still unable to get over the summer of '76.

The novel, called The Might Have Been, comes out next Tuesday, March 20. It seemed a pity to speak about it at length with the author and then run a feature about a book you can't even buy yet, so we asked Schuster's publisher, Random House, if we could run an excerpt, and they graciously consented -- so graciously, in fact, that from where you're sitting right now you can read the first two chapters of The Might Have Been in their entirety.

The Edward Everett you're about to meet here is 27, freshly called up from the Cardinals' triple-A club after languishing for years in the minors, so green that he leaves his bats behind and can't understand the third-base coach's signals. If it all sounds like the first day of a job anywhere, keep reading on through Chapter Two, the game of Edward Everett's career, and see why this is the sort of job some people just can't let go.