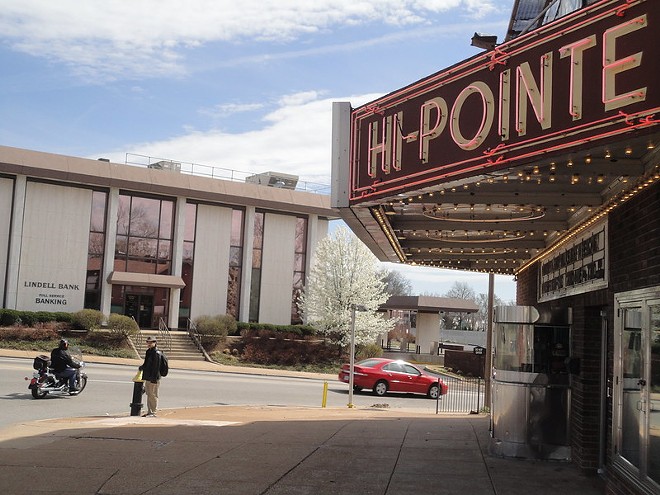 VIA FLICKR / PAUL SABLEMAN
The Hi-Pointe will soon have new ownership.

In a bit of exciting news for film buffs and fans of the classic moviegoing experience, Cinema St. Louis has announced today that it’s planning to purchase the Hi-Pointe Theatre (1005 McCausland Avenue, 314-995-6273). The arts nonprofit, best-known for hosting the annual St. Louis International Film Festival, will make the Hi-Pointe its base of operations starting in January.

According to a press release, Cinema St. Louis intends to use the space to "create cinematic experiences that enrich, educate, entertain, and build community."

The acquisition of the 100-year-old theater will finally create a permanent home base for the organization, which has long operated out of independent venues but has been somewhat homeless since the shuttering of the Tivoli.

“Cinema St. Louis is grateful for this opportunity to not only preserve the last remaining arthouse cinema in St. Louis but also to finally create a permanent home for the organization and make film accessible for the entire St. Louis community,” Cinema St. Louis Executive Director Bree Maniscalco said in a statement. “CSL will host its annual film festivals, educational programming and filmmaker seminars at the Hi-Pointe Theatre. The organization will also offer repertory film series throughout the year as well as screenings of first-run films.”

Additionally, the release said the purchase will enable Cinema St. Louis to:

-Use film festivals and special events to establish the Hi-Pointe as a unique regional destination to draw visitors to St. Louis.
-Increase access to film and filmmaking for underrepresented audiences.
-Showcase local talent and bring global, well-recognized films to St. Louis.
-Expand free educational and enrichment opportunities to K-12 students through filmmaking camps and screenings throughout the year.


The Hi-Pointe Theatre originally opened in 1922; it's the oldest locally owned arthouse theater that is still in operation in St. Louis. George and Georgia James purchased the theater in 1977 and handed over operations to their daughter Diana Grayson in 2014. The impending sale caps off more than four decades that the theater has been run by the family.

“After 45 years of owning the beloved Hi-Pointe Theatre, we have decided that it is time to end our run,” the James family said in a statement. “We have been blessed to share this theater with 3 generations of our family and have had the privilege of helping it reach the magical age of 100 years. We know that Cinema St Louis is the perfect sequel to our story. They share the same passion and vision, and we are confident that they will be able to carry on our family's legacy for the next 100 years. We thank you for your continued patronage, dedication, and support through the years. We will miss you all.”

For more information on Cinema St. Louis and its purchase of the Hi-Pointe Theatre, visit cinemastlouis.org.

Daniel Hill is editor at large for the Riverfront Times and he demands to be taken seriously, despite all evidence to the contrary. Follow him on Twitter at @rftmusic.
Read More about Daniel Hill
Scroll to read more Movie Reviews & News articles (1)