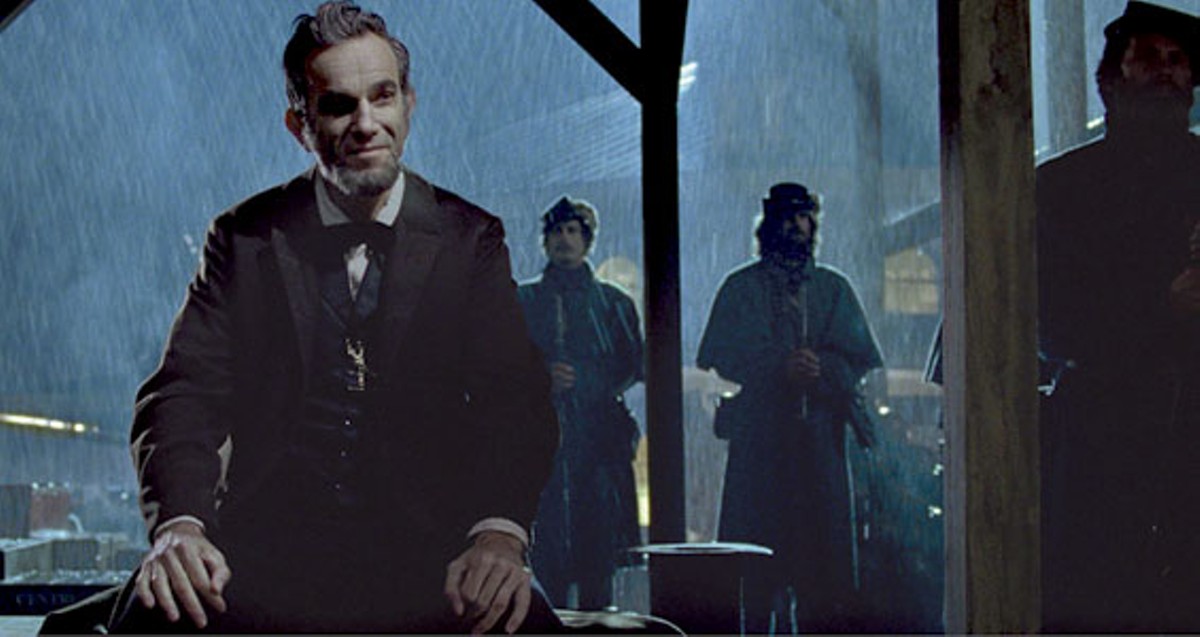 There's an unfun tendency in American life to fictionalize our national heroes as rigid statue-people who only speak as though they are delivering commencement addresses, a kind of unlovable, Al Gore–ish anti-charisma that would inhibit anyone in real life from becoming a national hero in the first place. Own it, Mr., Mrs. and Dr. America: We're a big-hearted, sappy goddamn people. We like our heroes homespun-folksy and our films directed by Steven Spielberg, whether we admit it or not.

Much has already been written about Daniel Day-Lewis' interpretation of the sixteenth U.S. president in Spielberg's Lincoln, and specifically about the reedy Midwestern tenor he adopts for the role, derived from the often-mocking historical documentation of political contemporaries and newspaper accounts. A sharp contrast with the stentorian elocution actors tend to adopt for the Great Emancipator, it's the most superficial and immediately apparent facet of this somehow almost 4-D character made flesh by Day-Lewis: a vivid evocation of a man whom no living person ever knew, and what amounts to the best guess of arguably the best actor of his generation.

So that's one of the challenges Spielberg confronts: squaring the Georgia white marble of the Lincoln Memorial with the flesh-and-blood reality we can never really know — evoking and honoring the man without diminishing the leader. The director's other challenges include relating a narrative about the complications and subtleties of political maneuvering and the inherent suckiness of the biopic form.

When you get beyond the technical and cosmetic aspects of Day-Lewis' performance — the attenuated voice, gangling stride, the actor's striking physical similarity to the president — this Lincoln is quietly ironic, an indulgent storyteller, a charismatic leader. A politician by turns charmingly persuasive and iron-fisted. A melancholic who suffers deeply, forced to barricade his grief behind a facade of steadiness and disarming humor. A father who sprawls on the floor with his young son and a husband whose wife's madness is no match for his affection. Day-Lewis is just crazy good.

The film is studied and often somber, but it is also hugely entertaining, a bitchingly fun story of political gamesmanship, influence trading, patronage, cronyism and outright bribery, much of which involves a comic trio of lobbyists played by John Hawkes, Tim Blake Nelson and the awesome James Spader.

Spielberg avoids the biggest mistake screenwriters and directors make with biographical films: TMI, starting with the uteral fusing of protein chains and just letting the camera run until the subject's corpse decomposes into a skeleton and Ben Kingsley gets an Oscar. Instead, he breaks with the form in two key ways. First he acknowledges that, no matter how well-researched, the film is a work of fiction, and second, he lenses the portrait through the single most important event of the subject's life. Written by Tony Kushner and based in part on Doris Kearns Goodwin's Team of Rivals: The Political Genius of Abraham Lincoln, the film dramatizes a single month in which the Republican party pushed for the 13th constitutional amendment abolishing slavery in the United States.

From the perspective of contemporary political polarization, Democrats can read the film's parallels between Lincoln and Barack Obama, effective leaders perceived by the extreme wings of their own parties as insufficiently dogmatic. And Republicans should be extraordinarily happy with Lincoln's historical Republicanism, particularly with the portrayal of Representative Thaddeus Stevens, chairman of the House Ways and Means Committee, an opponent of Lincoln who became a temporary ally for the purposes of passing the amendment. Played by Tommy Lee Jones, who bears a remarkable resemblance to historical photos of the bewigged Stevens, this is a sarcastic, brilliant congressman whose radical opinions in favor of racial equality threaten to hoist him by his own cranky, outspoken petard. Against steep congressional obstacles and bitter social headwinds, the politically adroit Lincoln persuades and cajoles Stevens into tempering his rhetoric to ensure the amendment's passage.

The late-period Spielberg sometimes chooses his projects the same way grade school kids embark on term papers: "Abraham Lincoln was our greatest president." "World War II was a hard time." Somehow, "Mommies should not abandon their robots" gets in there, too, but the point is that, like young people, he favors giant, world-bestriding themes. But then he pursues them from largely unexplored, ground-level perspectives, often rendering immediate and real what had previously been abstract. Battle scenes have never been the same since the landing at Omaha beach in Saving Private Ryan.

Here, Spielberg presents a gloomy White House in a dirty city of mud streets. The color saturation approaches black-and-white, lending the film a kind of handmade intimacy much in keeping with the humanization of a figure best known from statues and pennies. Goodwin and such writers as Gore Vidal successfully imbued the man with a sense of humanity, but filmmakers have usually tended toward a certain hagiographic tightness of ass. This Lincoln, stunningly portrayed by Spielberg and Day-Lewis, is real and relatable and so, so cool. Oh, and there's some orchestral bullshit by John Williams, too, if you're into that kind of thing.