Dark Comedy Apples Is Worthy of The Big Screen 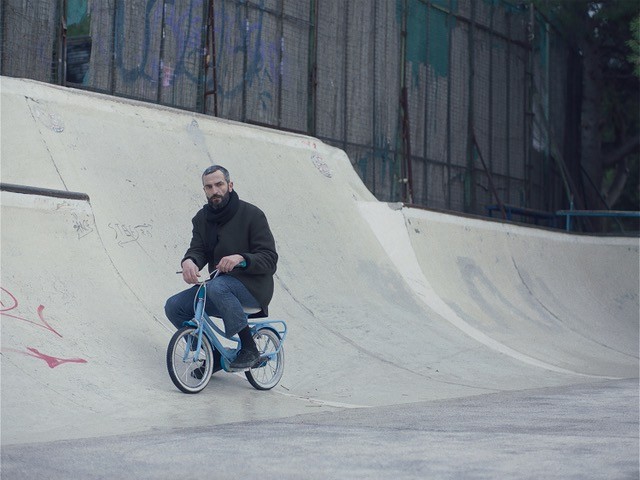 Courtesy Dirty Films
Aris attempts to recapture his memory by completing a series of human milestones, including riding a child's tiny two-speed at a skate park, and documenting them with a Polaroid camera.

A gray skyline, an empty couch, lonely bed pillows, a clutter of coffee cups, the antique lace that adorns the bust of a woman’s negligee. The first five, five-second shots of Christos Nikou’s Apples march forth to the staccato beat of what sounds like a drum but — as we find out in the sixth shot — is actually the thud of a man’s forehead deliberately knocked against a wall. For a film overtly devoted to the mystery of what goes on inside our minds, the terse montage feels eerily apropos, launching questions that the rest of narrative slowly, and only sparingly, seeks to address.

One of the most original, if understated, movies of the year, Nikou’s directorial debut relies upon the potency of the image above ponderous dialogue or showy close-ups. Bereft of celebrity mythos or discernible setting, the movie follows Aris (Aris Servetalis), a pensive loner who, after falling asleep on a city bus with a bouquet of flowers, can’t recall who he is or where he’s from. “Where were you supposed to get off?” asks the driver gently. “What’s your name, do you remember?”

Transported via ambulance to the “Disturbed Memory Department of the Neurological Hospital,” Aris soon finds himself in the clueless company of other amnesiacs, each the victim of sudden memory loss, each dressed in a blue uniform that resembles grandpa pajamas. Based on his doctors’ — and new roommates’ — nonplussed affect, it would seem that the entire region is enduring a pandemic of lost identity. Unclaimed by relatives, Aris is enrolled in the city’s New Identity Program, which aims to retrain patients to forge lasting memories and start new lives.

Courtesy Dirty Films
Actor Aris Servetalis befuddled expressions can be as equally funny as they are anguished.

Though taciturn and skittish, Servetalis cuts a striking figure — a more elegant, resigned Greek version of a bearded Joaquin Phoenix — and his befuddled expressions across the film can be as equally funny as they are anguished. Prompted by his medical team to match a picture-book image to the score of Swan Lake, Aris confidently presents a drawing of a man in a sombrero, his eyes sinking in defeat when his answer is quickly marked incorrect.

Placed in his own flat as part of the hospital’s program, he is asked to complete a series of human milestones and document them with a Polaroid camera. Aris calmly follows doctors’ orders, which range from riding a child’s tiny two-speed at a skate park to receiving a lap dance at a local strip club, placing each Polaroid into his official scrapbook and forming a chronicle of new memories of which to be proud. Gradually realizing that his new friend and fellow “New Identity” student, Anna (Sofia Georgovassili), is more invested in checking off assigned milestones than building a relationship, Aris finds companionship in a dying old man whose bedside visits are yet more events to capture and archive. “I would like a homemade pastry,” the old man confides as Aris serves him spoonfuls of hospital gruel, “like the ones my wife used to make.”

Dubbed by critics as both an “esoteric black comedy” and “gentle absurdist drama” (both assessments true), Apples refuses tidy categorization in the same way as Boots Riley’s Sorry to Bother You, or the poetry of the late John Ashbery. With minimal camera movement and an Academy ratio, the movie maintains a quiet stillness at odds with the seemingly dramatic stakes of the plot. The conspicuous lack of digital devices, advertisements and screens lends each scene a meditative quality, tempering what would otherwise seem to be a dystopian mass amnesia and lost identity. 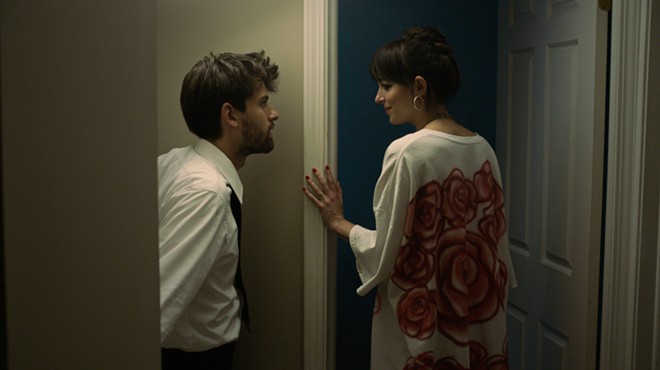 
Apples’s delicious strangeness might earn Nikou comparisons to Greek auteur Yorgos Lanthimos, whose Dogtooth wowed and disturbed in 2009 long before star-studded hits such as 2018’s The Favorite. But if Lanthimos’s dark sense of humor comes with the cost of occasional cruelty, Nikou’s is suffused with almost shocking kindness. Through Aris’s patient eyes, we piece together his life prior to amnesia, which proves just as devastating as his memory’s abrupt disappearance. By the end of its taut ninety minutes, Apples takes on an elegiac tone that reminds us of the incredible gift — and burden — of having a past to begin with.

In his letter for Landmark Theatres, which Nikou addresses to “all beloved cinephiles of the world,” he implores readers to “return to theaters and give a chance to be moved in a dark room with other people.” At its heartfelt core, Apples is a film fully worthy of the big screen; we should count ourselves lucky to get a taste of Nikou’s vision during its brief time in wide release. 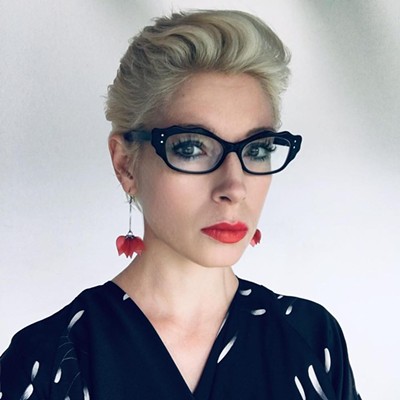