Finally, a Good One: What if a Liam Neeson movie was as potent as Liam Neeson? 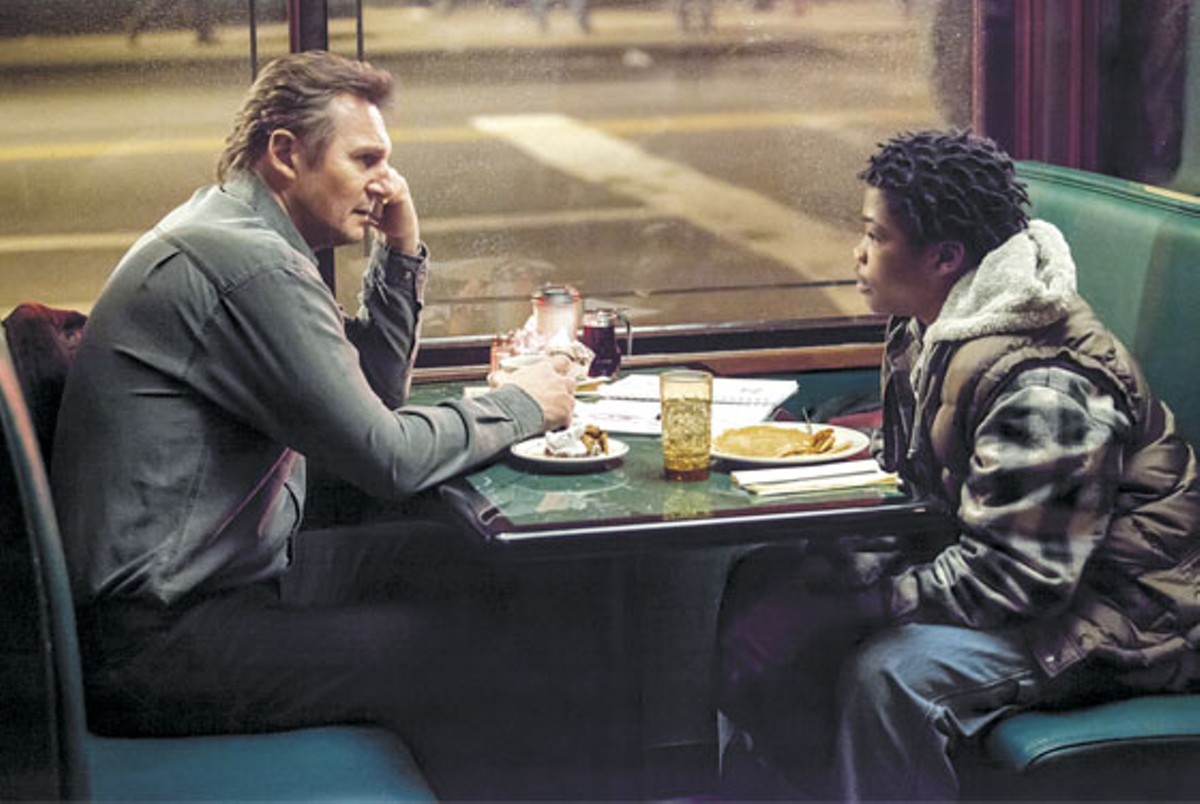 Liam Neeson and Brian Bradley pair up to crack a vexing case in A Walk Among the Tombstones. Atsushi Nishijima

Finally, a Good One: What if a Liam Neeson movie was as potent as Liam Neeson?

They've done it at last: made a Liam Neeson-stomps-some-ass flick where, as the credits roll, there's more stuff to be glad you saw than Neeson himself. Based on one of those Lawrence Block novels that's pretty smart but also too invested in the mechanics of rape and torture, the movie's a grim beauty, shot like nobody told writer-director Scott Frank he's supposed to be churning out schedule-filling late-summer product. Instead, Frank has crafted the kind of thriller that Neeson's brooding elder-toughs have deserved all along, a tense and prickly picture more interested in shoe-leather investigative work than in making a lark of brutal deaths. Neeson's Matt Scudder — the glum ex-cop hero of many bloody Block books — bobs about Frank's colorless pre-millennial New York like a cigarette stub in a can's last spit of beer: He's forgotten and unwanted where no one would ever look.

But that New York is worth looking at. Savoring, even, in its grand decay. Without sacrificing the momentum of the crime story, Frank and director of photography Mihai Malaimare Jr. immerse us in long, static shots, sharply composed, where we see into one hollow of the billions rotted into the city — and are left to wonder what outside life might be pressing in on our hero. An early scene exemplifies the technique: On the right side of the screen, Neeson slumps in a booth too early in the day at some deserted, olive-drab bar. To his left, via a natural split-screen effect, we see the proprietor, out of Neeson's sight, and then far up above him the door to the street. Sickly light cuts in through a window, guiding our eye to the doorway. Everything's still, a little pathetic, but we're cued to be attentive, to divide our gaze between Neeson's dispirited lump and the someone we know will soon bust in and get the movie started.

It's a rare moment of quiet and breathing and dread in a studio picture. It's echoed, later, by the scenes of Neeson on the case, picking his way through the hallways of buildings we know he shouldn't be in. As in a strong horror film, dangerous possibility crowds into the best moments — what you imagine this New York might cough up could be scarier than what it eventually does.

Not that the villains of A Walk Among the Tombstones aren't unsettling. The case Neeson's on is yet another kidnapping, this time of the wife of a drug trafficker (Dan Stevens) who offers $40,000 to Scudder to locate the perpetrators. They turn out to be mundane and uncanny at once: Goateed white boys, pale as the grubs under rocks, played by David Harbour and Adam David Thompson, their faces artfully shielded from us for much of the film. Of course, Scudder finds they're up to much more than this one abduction, and Frank dutifully shows us flashes of his heavies engaged in the sexualized violence so common to bestselling crime novels. He suggests it rather than dwells, but what excuse is there for a scene of a rapist calmly demanding a woman choose which breast he won't slice off, especially in a film that otherwise never finds time for a woman to have a speaking part? In Scudder's world, as on the paperback rack at the drugstore, women are there to be saved rather than talked to. I ask this next question as someone who mostly admires the film: Doesn't the fantasy of avenging unthinkable crimes demand fantasizing about those crimes?

Still, A Walk Among the Tombstones is an uncommonly well-made thriller. Neeson spends most of the film in bummed-out-sleuth mode, puzzling rather than fighting, commanding the screen even as his Scudder sinks into the shadows. The painstaking buildup makes the killing, when it comes, more terrifying and cathartic than is the Hollywood norm. The Taken films invite viewers to cheer violence; A Walk Among the Tombstones, with some moral force, insists that you want nothing to do with it.

Neeson's character is freighted with past tragedy, and it's no surprise when we see him at an AA meeting. Few movie stars are more adept at suggesting having aged with grievous regret, a mode that suits a man who blew a year of his life making The Phantom Menace. The specifics of a late-career Neeson bruiser's particular back-story hardly matter: What he offers audiences, besides his wounded soulfulness and dogged grace, is hopeful struggle, the rediscovery of purpose, the promise that through just and forthright action even the most lost of us can earn a place among the living — a hollow worth inhabiting. At the climax, Frank endeavors to tie Scudder's heroics directly to his fight against alcoholism, a gambit that confirms the writer-director's courage even as it gums up the storytelling. The final beats of the action are linked, via voiceover, to AA's twelve steps, none of which exactly cover how to fend off a garrote attack.

Neeson gets a sidekick, a teenage African American boy who seems to be homeless and helps him with the Internet. The kid's dialogue is hokey, and it's unfortunate that he gets jumped for his Timbs, but there's something reassuring about his reluctant friendship with Scudder. In the summer of Ferguson, here's a gun-happy ex-cop, white as the cliffs of Dover, trusting his life to a kid he once might have stop-and-frisked.