Helen Mirren will cut you, and other awesome old-people things, in Red 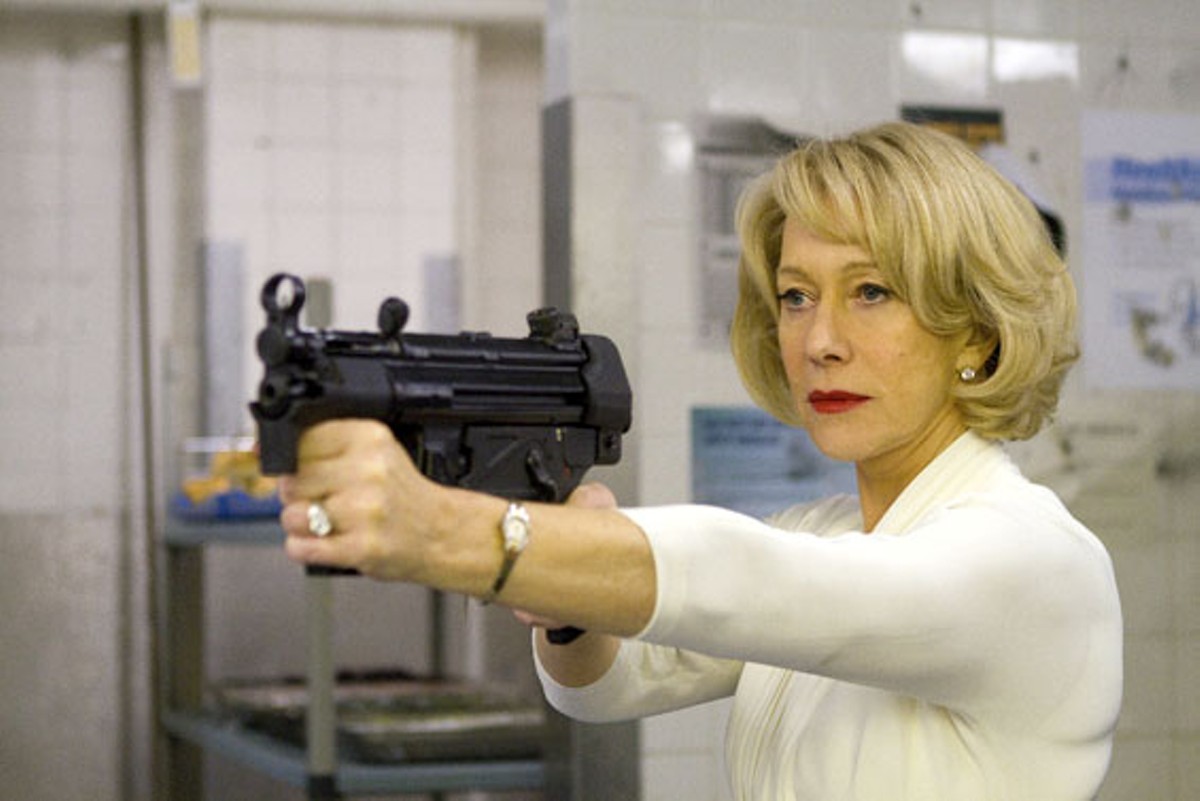 Helen Mirren will cut you, and other awesome old-people things, in Red

Not the best. Not the worst. Just the classiest—Helen Mirren (and Morgan Freeman and John Malkovich and Brian Cox and Richard Dreyfuss) can spruce up any pulp. As far as comic-book adaptations go, though, Red is a little closer to the bright side of so-so— somewhere between, let's say, Iron Man 2 and Ghost World on the patented Fanboy-oh-boyometer.

Based on a Warren Ellis three-issue toss-off, Red barely acknowledges its roots. The original—a straight-ahead tale about a retired Company hit man named Frank Moses next on the CIA's to-do list because he's an embarrassing relic—was bloody and humorless, with Frank eventually storming Langley and gutting all comers. Its big-screen counterpart, written by the brothers who made a mockery of the graphic novel Whiteout (Jon and Erich Hoeber) and directed by the man who made The Time Traveler's Wife (Robert Schwentke), is all grins and giggles—a kid-friendly Kick-Ass...or, let's be honest, an AARP-friendly Kick-Ass. (Holy shit, there's Ernest Borgnine as a character called The Records Keeper!) It's messy, but hardly gory. Goofy? That's more like it.

And it's absolutely, thoroughly enjoyable. Red rocks like some giddy mash-up of It's a Mad Mad Mad Mad World, The Manchurian Candidate, Three Days of the Condor and every movie ever made in which a hired gun yanks at his holster for One Last Stand to kill the one who brung him in the first place. Which is fine—nothing wrong with an affable movie about trained killers played by Oscar winners on paid vacation. It's only afterward when you realize nothing actually happened in between road trips and explosions. Plot's hardly the point here—Red is a travelogue, its map to the finish line pockmarked with the occasional explosion and a few drops of blood as Frank tries to figure out why he, a retired agent, has rocketed to the top of the agency's to-hit list.

Bruce Willis plays Frank, ex-CIA now living in Cleveland, where he whittles away the days in a snowbound modest suburban home. Willis doesn't have the deep-felt sadness of the comic's grizzled, deeply wrinkled eccentric who just wishes to be left alone; his Frank is more John McClane in early retirement, a dude secretly itching to get back in the killin' bidness. When the bloodthirsty, barrels-blazing Men in Black come calling at 3:30 in the morning, Frank's wide-awake and ready for them—the alarm clock's gone off, time to get back to work.

And so Frank begins his trudge across America to get the band back together again and find out what the what is going on. First stop Kansas City, home of the government retirement-check-sending drone Sarah (Mary-Louise Parker), with whom Frank's had a longtime phone relationship. She loves her trashy spy novels, then, lo and behold, she's living one: When Frank shows up, he brings with him tagalong assassins who think the two are in cahoots—and their long-scheduled date becomes a hostage crisis. Parker is Red's version of Justin Long—the sidekick intended to young up a movie that pit-stops in a New Orleans retirement home, where Morgan Freeman's Joe spends his time ogling nurses' asses as they adjust the TV antenna.

Next stop, Florida, where Willis and Parker find Malkovich—an acid-damaged, mind-controlled, paranoid short fuse—living in an underground bunker accessible through a dead car's trunk. In D.C. they find Cox's retired Russian spy Ivan (of course), shooting vodka (of course) while reminiscing about the Cold War: "I miss the old days," he tells Frank. "I haven't killed anyone in years." To which Frank replies, with tear-stained sincerity: "That's sad."

From there it's off to Virginia and CIA HQ. Frank figures the only way to find out why the Company's trying to kill him is to break in and, well, ask. The answer? Something to do with Guatemala in 1981, hard to say. Even the man sent to finish him off can't make heads or tails of his mission. It all ends with a Big Finish in Chicago, involving the vice-president, a hotel speaking engagement and what may or may not be an assassination attempt featuring Mirren, a .50-caliber machine gun and Malkovich sprinting down an alley at top speed with a Flavor Flav clock and some dynamite strapped to his chest.

This isn't an old-fogies Ocean's Eleven; it takes a good long while for the old gang to get back together. Mirren, as the regal assassin who still takes jobs on the side when not flower-arranging, doesn't show up till late in the movie, at which point she's asked to do little more than point and shoot (and does a fine job of it). Freeman too disappears for a long stretch, till he shows up again dressed up as a "General Baptiste," who looks more like a member of Sgt. Pepper's Lonely Hearts Club band gone AWOL. It's a comic-book movie, all right. Heavy emphasis on "comic."