In The Worst Person in the World, Romance Is and Isn't Easy 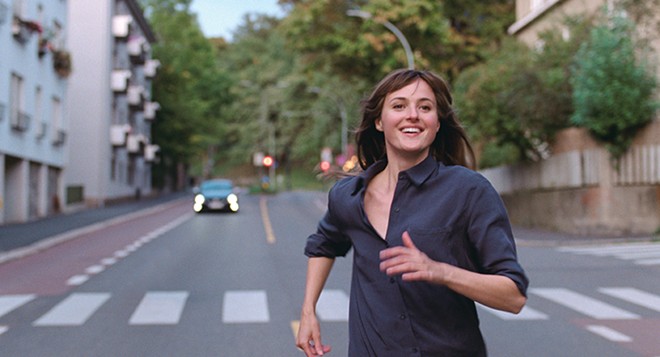 VIA OSLO PICTURES/NEON
Renate Reinsve plays Julie in The Worst Person in the World.


For a director obsessed with questions of fate, power, choice and consequences, Joachim Trier's largely realistic suite of work focused on the everyday might not seem like the most natural mode. But with the exception of 2017's Thelma, the Norwegian director has routinely plied renderings of everyday life to explore these themes nonetheless. Across Trier's work, the weight of choice is puzzled over, but cards are dealt anyway, with a fair degree of arbitrage. As with the rest of his informal "Oslo trilogy," romantic struggles, career crossroads and weightier, inevitable cycles of life comprise The Worst Person in the World's action, making it part of an increasingly rare filmic genre of its own: one which treats the regular stuff of adult day-to-day life directly.

The film's impossible to watch without doing so from within a contemporary context starved of this kind of stuff, which finds few stateside points of comparison onscreen beyond the work of Mike Mills or Noah Baumbach. No one (and certainly not critics) can read or watch any text from a truly neutral ground, and so every film's reception is shaped by the experience and position of whoever's watching. But Worst Person would hold up even read outside its own context, for the questions that guide it, and Trier's work more generally, are ubiquitous.

Swirling around the character of Julie (a remarkably expressive Renate Reinsve), a woman torn between different vocations at the film's start as she approaches 30, Worst Person makes her waves of romantic longing, fulfillment and discontentment — along with their consequences — its prime subject. Working with a light touch in scripting, a drifting, probably rig-mounted camera and a newfound intimacy with shadow thanks to cinematographer Kasper Tuxen, Trier's film moves freely between tones across its prologue, epilogue and twelve chapters. While this structure may seem arbitrary beyond alluding to a novel (Julie's a bookseller for most of the film), it permits a narrative looseness that highlights the potential for change across its parts, befitting a particularly turbulent phase of life.

Between chapters and even frames, Trier and co-writer Eskil Vogt allow for shifts in characters' feelings and circumstances to arise without heavy drama or explanation. At times, this risks making proceedings feel fluffy — it doesn't seem to matter whether Julie works in psychology, in writing, or in photography — nor is it clear what these career paths could or might give her. But this sense of vagueness is no more arbitrary than the burdensome, typical rules of Hollywood scripting, which dictate that characters require a series of obstacles separating them from some clear want. (It's also possible that career changes in Norway simply are lower-stakes, considering the stronger social safety net there.) In the case of Julie, the thing she desires throughout the film's duration is obscure to us and her: a mythical sort of compass I'm not sure many have. In place of this, she feels a more acute range of smaller wants, coming from places she likely couldn't name if pressed, which give the film its shape. If Worst Person has a cardinal rule, it's that the origin of a feeling need not be pinpointed or even judged.

This proves truer nowhere more than in romance, especially for Julie, a character stubbornly resistant to the often reductive, even repressive forms of logic suggested by an analytical frame. As a character and performer, her openness to feeling sets her apart within a bit of a repressed culture — but it also connotes a certain inarticulacy, a trouble giving voice to, much less navigating, the range of what she feels. Her partner Aksel (Anders Danielsen Lie, a Trier regular), who she meets early in the film, has no such troubles; as a Zap-schooled comic artist and cultural provocateur, he's better in love than he is in art, direct and sure in speech, if a bit too prone to explanation.

While the film's politics are fairly peripheral, albeit current, the nature of Trier's work provides an illuminating tell. In Norway's (from here dreamy) political climate of widespread, left-leaning orthodoxy, his barely filtered, reactionary work is itself no less telegraphed, taking the form of an equally structured and predictable critique. His regressive art is even more wrapped up in personal, positional experience and self-conception as any of Julie's tempestuous swerves in romantic and professional interest are. While she can't necessarily separate her feelings, which are bound up in contemporary feminist self-conceptions about family, her career, her partner and her politics, from her own place in the world, she can and does allow herself to embrace them. What Aksel demands of himself in terms of imagined levelness or coherence in viewpoint, Julie answers with a combination of an openness to her inner life and a deeper experiential hunger, the latter offering another plausible, but indefinite, source among many for her periodic waves of discontent.

It's no real spoiler, then, to say that Julie's position on her relationship changes (Chapter 2 is titled "Cheating," though it's smarter than its title), dooming it in part thanks to her fidelity to her own feelings on the matter. While there are potential causes floated — he's a decade-plus older and longs to have children, she feels alienated from his friends and seems to feel outstripped at times in terms of his career, and there is indeed another man — the core of this faltering chemistry is presented almost as a force beyond her, something more like a religious mystery. If this positioning seems to fall along too familiar or familiarly gendered lines, it's worth noting that it's something the film proves happy to disrupt. Thankfully, Worst Person is premised on constant complication, and the notion that no one's idea of themself can be too sure or pure.

Julie's choice to leave Aksel briefly provides a glimpse of near-certainty amid a sea of fog, giving Worst Person its two centerpiece sequences. Trier monumentalizes her decision to leave, first through a playful fantasy and then a surrealist reverie. In each, the decisive moment, or movement on Julie's part, is presented as an intoxicating, freeing rush of power while also being re-imagined as more escapist than it could be, freed of negative stakes. This second aspect is what Worst Person is most willing to counter, engaging with the friction between what we owe ourselves and the things we'd wish to give others, which are sometimes things they probably deserve. The emotional fallout that stems from Julie's both regular and weighty decision is pointedly not treated in moral terms, but as an inevitable risk of becoming close to anyone in full and ultimately right possession of themself.

Buoyant and absorbing though it is, and due largely to Reinsve's tremendous performance, Worst Person digs in quite deeply anyway into the messiness of life's most basic features, which will likely feel familiar. But that sense of broad familiarity stems from a certain elemental quality, one accessed through the particulars of its characters and their entanglements — invitingly shaped though they and the film both are. Balancing these traits of emotional generality with a sensation of precision is on Trier's part no mean feat, and is a case for and not against the film. It's also a case for more films like it to address the things it does: the recurrent, bedrock struggles of being alive to and in the world.