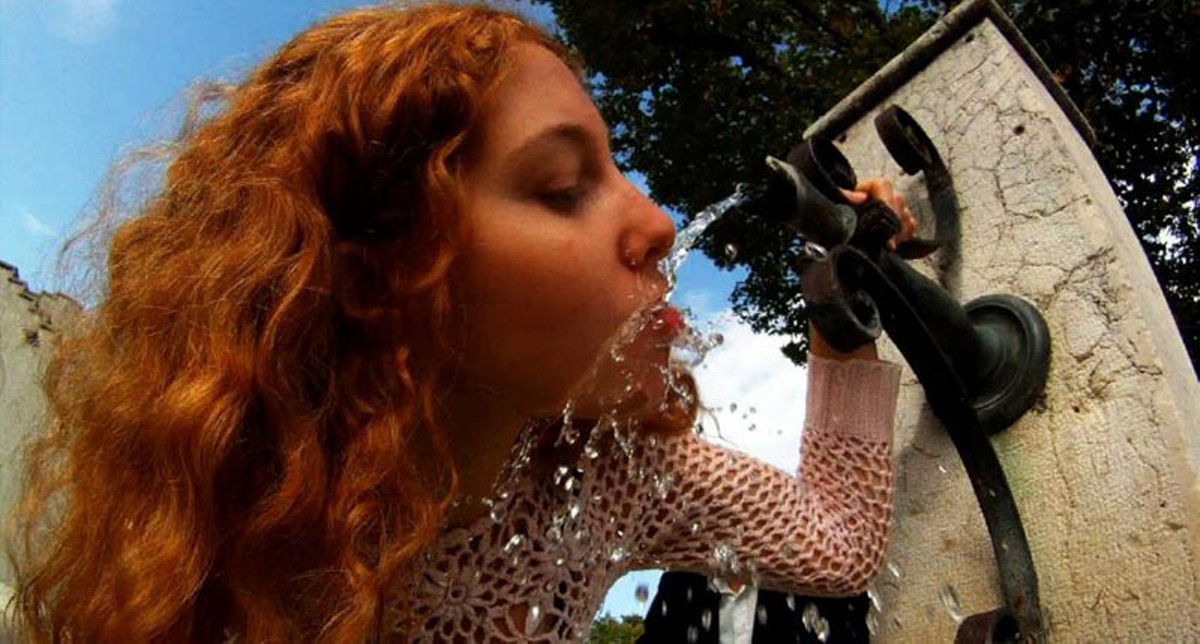 Given the chance to make a 3D film, aging enfant terrible Jean-Luc Godard must have thought, "Why stop at just 3D images? Why not make a film in which everything — even the characters and the narrative — exists in multiple dimensions?" The resulting Goodbye to Language is a film without precedent, a groundbreaking, tradition-shattering work that doesn't so much say goodbye to language (an old Godardian theme reaching all the way back to the "return to zero" of 1967's Two or Three Things I Know About Her), so much as try out a new way of looking at the world. As with any late Godard film (and it's been pointed out that Godard's late period has lasted about four times as long as his early and middle periods combined), it's difficult, dense and seemingly impenetrable. It's also hypnotically beautiful and daringly innovative.

Here's our attempt to prepare you for what you'll see.

So What Is It About?
There's not really a plot, but there are stories. The film follows (and contrasts and alternates) two different love affairs, two couples whose actions duplicate or complement each other. The repetition and doubling, while confusing at times, stretch and expand the content of the film just as the digital manipulation of the image does likewise to the physical space.

Quotation Marks Are Key Like most recent Godard films, the soundtrack is rich with quotations, usually spoken in the director's own gravelly voice: History, philosophy, literature, Sartre, Wittgenstein, Freud, Shelley, Proust, Cocteau, Darwin...Godard even quotes himself (a line from a 1958 review). It's not necessarily important that the viewer recognize the source of a quotation — many of which are inaccurate or have been slightly re-phrased — only that you recognize that it is one. Godard's point may be that we have achieved saturation: Everything has already been said.

You Become the Editor (Choose Your Own Adventure)
For years, Godard has railed against the tradition of the shot/counter-shot, the editorial convention that allows filmmakers to create an artificial space by combining two different images. For example, we see Richard Gere, then we see Julia Roberts, and we assume that there is a shared location in which the two of them are talking. It may not be immediately apparent, but there's not a single instance in Goodbye to Language of that kind of traditional editing. But there is a brilliant, audacious moment in which Godard uses 3D to completely disrupt the way you're watching the film, allowing (or forcing) viewers to create their own shot/counter-shot rhythm just by blinking their eyes.

In the End, These Are Just Images
And as always with Godard, it all comes down to the use and production of images, the question of how a filmmaker can or should shape the world. But in this film, the images are given depth and space. Godard defies the conventions of the usual 3D spectacle by concentrating on distance and texture, contrasting flat images (television screens and old newsreel footage) with those in high-definition video. More than that, Godard meditates at length on the texture and depth of surfaces that first appear to be flat, from the rain-covered ground to the wet fur of his dog, Roxy (who plays a prominent role in much of the film). Though watching the film in 2D still gives some sense of the film's physicality, the 3D version startles with its innovation, sometimes simply by allowing the ordinary clutter and space of the real world into the frame.

No, Really. What's It About?
OK, I'll admit it's not easy. Like most late Godard, it doesn't reveal itself in a single viewing. There is both a sense of distance and one of intimacy in Godard's recent films, the byproduct of modern digital technology that has made his recent work more visually stunning even as it becomes more intellectually challenging. He produces images as quickly as we can consume them. Don't let that overwhelm you. Absorb them. Marvel at the sheer physical beauty of the three-dimensional space, without a single superhero or Minion in sight. The most ambitious and innovative filmmaker of the last 60 years isn't interested in simply making us see new things; he lets us see old things though new eyes.