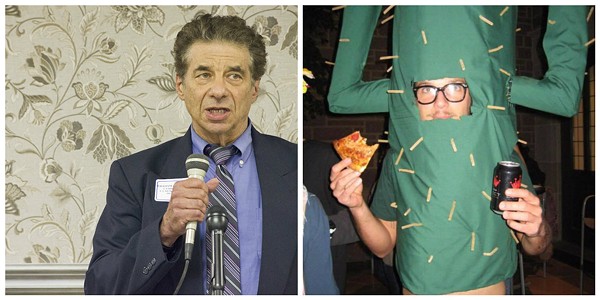 Stuart Keating, right, says the candidate we know as "Bill Haas" is actually his creation.
Bill Haas, arguably more famous for serving up word salad like yesterday's open letter than his penchant for running — and losing —political campaigns over the course of two decades, purports to be a graduate of Yale and Harvard Law. In an era where public spectacle has replaced politics, we know better than to take politicians at their word. Does Bill Haas even exist?

"Bill Haas is the perennial fringe candidate all lefty organizers know and hate," Keating says. "I was frustrated with how goofy and ineffective local third party candidates were, so I wrote up the ultimate satire of a fringe politician: over-hyped education, inability to form coherent sentences, looks like Ralph Nader except crazier, Eminem quote on webpage. I can't believe it stuck."

Bill Haas' website is indeed a treasure trove of "don't vote for me" warning signs — an issues page where policy positions are stated but not explained, a "Quotes" page with quotes attributed to Eminem, Michael Phelps and, yes, Bill Haas himself, and a "Donate" page that inexplicably redirects to the "Quotes" page.

"I didn't want anybody actually giving me money to do this nonsense," Keating laughs.

What Keating claims started as an art project/satire of the local Green Party has now run across multiple years and campaigns, with signs showing up like clockwork every time there's a Democratic primary in St. Louis. "It's tiring," says Rebecca Schranz, a longtime associate of Keating. "I help him with this thing occasionally, he's got this huge Bill Haas folder with ideas and character sketches and it takes hours to sort through it to make sure we're not being inconsistent."

Questioned about how far this joke has gone, Keating waxed philosophical: "Satire is an important part of the political process, whether it's inventing a candidate and taking the joke so far as to self-publish an unreadably bad 'political love story' novel, or poking fun at wannabe public figures via easily-disproved news stories." Asked about the novel's five star rating on Amazon. Keating smiles. "The book only has one rating, from an 'anonymous customer.'"

How does he handle public appearances? "Usually I just flake on them. Sometimes I'll get the guy I used to model for the photos to show up and mumble/shout sentence fragments, but that gets expensive. I'm thinking about taking the podium as Bill at the 20th Ward mayor's forum tonight since nobody in attendance has any idea who he is."

Adds Keating, "I mean, Bill Haas has been on the board of education for years and nobody seems to notice or care that he is actually a performance art piece, probably because it's an elected board controlled entirely by an appointed board. It's not how I'd manage the future of our kids but it was an unexpectedly winnable election."

What does the future hold for Bill Haas?

"I planned to run him for office until 2023, when I hoped to have him win Recorder of Deeds while simultaneously lobbying the Board of Aldermen to turn the position back into an appointee slot, thus getting him fired," says Keating. "Instead, I think I'm going to drop the whole thing and help organize a St. Louis chapter of Democratic Socialists of America. Since there's never a meaningful challenge from the left, the Democrats in office here tend to act like Republicans."