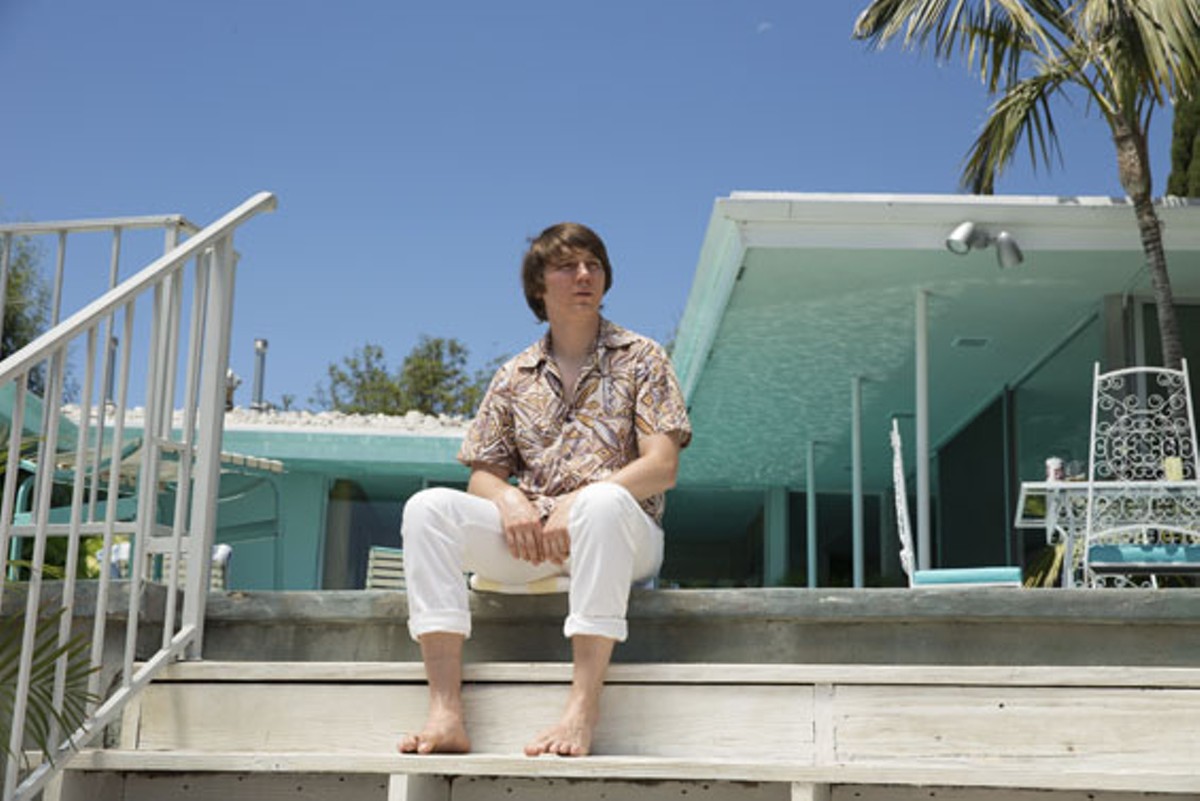 So many words have been written about Brian Wilson that it is difficult, if not impossible, to get an accurate picture of the man who gave the world Pet Sounds and Smile, the two greatest pop symphonies ever composed. Director Bill Pohlad attempts to sharpen our perception of Wilson by using different actors -- Paul Dano and John Cusack -- to portray Wilson at two key moments in his "inspired by the life of Brian Wilson" biopic, Love & Mercy. Dano is Wilson at the peak of his creative genius, the creation of Pet Sounds and its long-delayed followup, Smile. Cusack is an older, more rumpled Wilson, the one who finally emerged from seclusion in the mid-'80s to produce a few dodgy albums and an autobiography that was most likely written by his then-caretaker, Dr. Eugene Landy. The script (by Oren Moverman and Michael A. Lerner) jumps between those two time periods, creating an appropriately multi-tracked vision of the artist. Cinematographer Robert Yeoman enhances this effect through the use of Super-8 stock, recreations of home movies and superimposed images to hint at the legacy that haunts Wilson's every move (creative or otherwise), while the Wilson of the '80s is seen in clear high-definition. But that man was far from in clear focus himself. Cusack bears only a slight physical resemblance to Wilson, but he captures every uneasy mannerism and tic. His awkward, stiff arms hang straight by his sides, fingers fluttering as if across a piano, when he meets Cadillac saleswoman Melinda Ledbetter (Elizabeth Banks) at the start of the film. In halting outbursts that pass for conversation he tells Melinda his brother is dead, that he'd like to buy a Cadillac and that he needs a pen. She's baffled but charmed by him, until Wilson's keeper, Eugene Landy (Paul Giamatti), shows up and simultaneously touts Wilson's fame while skeeving out Ledbetter with his desperate need to bask in its glow. It's only after Wilson and Landy leave that the saleswoman sees that Wilson has written "Lonely. Scared. Frightened." on a business card left in the car. Despite the strangeness of their meeting, the two begin dating. Dano has young Brian Wilson's moon face under a mop of hair, and he bounces joyously around the studio while directing the legendary collection of studio musicians known as the Wrecking Crew through the recording of the music that becomes Pet Sounds. (Fans will enjoy the little bits of Wilson mythology that appear as the musician works on Smile, such as the toy fire helmets and sparklers, the famous piano-in-a-sandbox and the infamous drug tent in the living room.) If Cusack's Wilson seems curiously frozen, Dano's is an innocent who is truly alive while sharing the music he hears in his head. The film's composer, Atticus Ross, blends bits and pieces of Beach Boys' hits into musique concrète blocks of sound that serve Wilson's inner soundtrack, but all is not well here -- even in the scenes set in an earlier time. Murry Wilson (a glowering Bill Camp), father of Brian, Dennis and Carl, and recently fired manager of his sons' band, dismisses his son's new music as "weak," and betrays Wilson's trust by selling the publishing rights to their record label -- and yet Wilson still craves his father's approval. The music in Wilson's head at this point manifests the menacing voices that torment him for the next twenty years; Dano's face snaps into that taut rictus of his future self when he hears them hissing at him from his headphones and cries quietly as his great gift becomes a source of torment. In that future, Wilson and Ledbetter's relationship is stage-managed by Landy. He's supposedly curing Wilson of his drug and food addictions through a radical "disruptive" treatment of his own invention, but he has in fact become Wilson's manager and surrogate abusive father, complete with power of attorney and an endless supply of drugs to keep Wilson pliable. Giamatti plays Landy as a self-important bully who sincerely views himself as the best thing to happen to Wilson in years. It's a nuanced portrayal of a strange, complex relationship that contrasts starkly with the flashback scenes of Wilson talking through his doubts with his brothers, Carl and Dennis. The steadfast belief Carl (Brett Davern) displays in his big brother's genius is the sweetest moment in the film. Love & Mercy's dual timelines both race toward inevitable crises: young Wilson's retreat to his bedroom after his inability to complete Smile and his father's death, and older Wilson's attempt to break free of Landy's oppressive grip. Banks' Melinda is shown as the prime mover in Wilson's escape, with help from brother Carl (in real life it was Wilson's cousin Stan Love who saw the process through). The cinematic version certainly has a stronger narrative thrust, and since the real-life Melinda Ledbetter is currently Wilson's wife, it makes for a happier, more Hollywood ending. But the real happy ending is that Wilson survived both of those crises healthy enough to not only release his version of Smile, but the excellent Lucky Old Sun in 2012.