Mission: Impossible -- Fallout Reminds Us What Action Movies Can Be 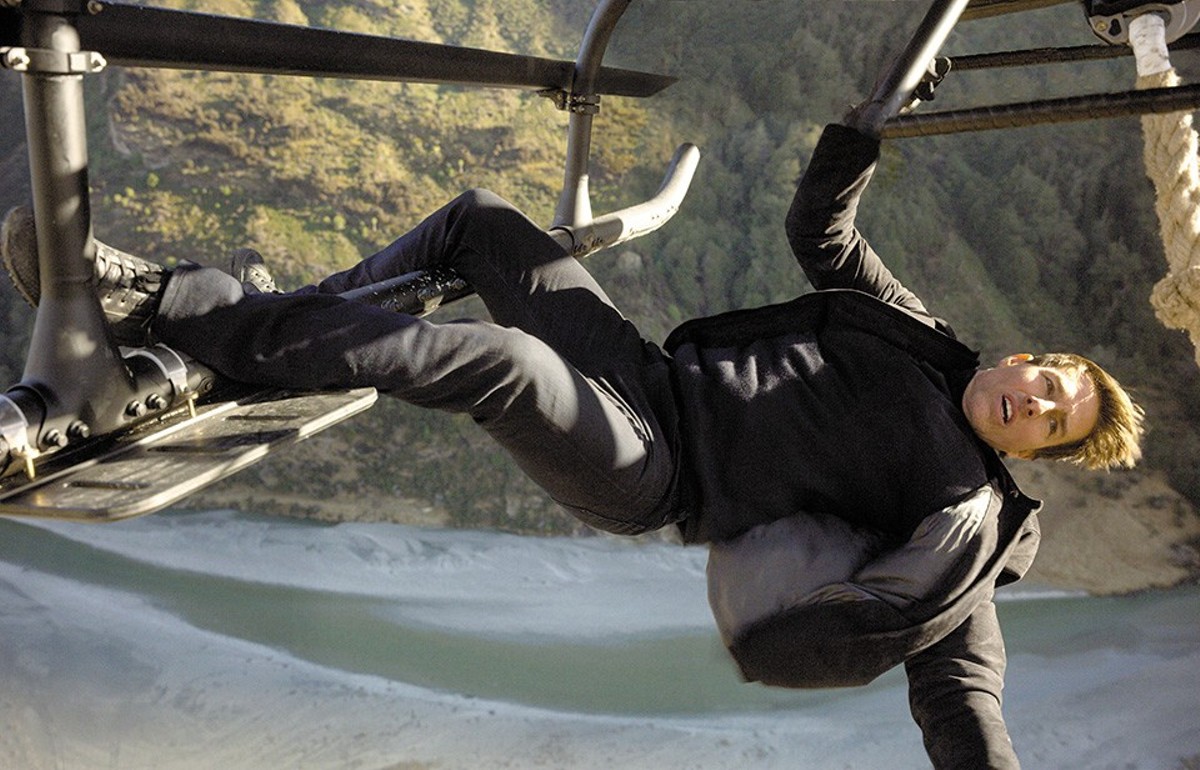 Back in the 1970s, each James Bond film began with a spectacular stunt sequence, the hero skiing down a mountain pursued by assassins or taking a free-fall plunge from a moving airplane. Viewers didn't believe that they were really watching Roger Moore flying through the sky or careening off a snow-capped cliff, but they knew that someone had actually done those things in front of the camera, and that was no small achievement.

Today when filmmakers routinely rely on computer-generated effects not just to create exploding buildings and flying superheroes but to remove creases from the faces of middle-aged actresses, we're missing that commitment to reality, that sense of human achievement and endurance when a stuntman (or woman) leaps, crashes or flies across the screen. It's a uniquely cinematic pleasure that goes all the way back to that day in 1896 when the Lumière brothers offered audiences a look at a train pulling into the La Ciotat station: a connection to the real.

Old-fashioned stunt work has become a hallmark of the Mission: Impossible series, which has seen Tom Cruise as hero Ethan Hunt (no relation) dangling from aircraft, scaling cliffs and scampering over rooftops, apparently without the benefit of wires, nets or body doubles. Not since Jackie Chan's great string of death-defying stunts in the '80s and '90s has a film actor been so willing to subject himself to physical extremes.

There's a notable difference, however, between the M:I films and the work of earlier cinematic risk-takers like Chan or Buster Keaton. Where Chan and Keaton played comic victims living in an uncertain and unstable environment, Hunt/Cruise is a professional. For them, the physical world was an obstacle; Cruise simply leaps over it.

Mission: Impossible–Fallout is Cruise's sixth appearance as Ethan Hunt in a cycle of films that have evolved from the high-tech (MS-DOS version) espionage of the initial 1996 entry to a globe-trotting challenger to the Bond series. Loosely based on the television series that premiered in 1966, from which it retains only the familiar self-destructing assignment notifications in each opening scene and the frequent use — taken to comic extremes in the films — of masks and disguises, the M: I movies are well-crafted Hollywood machines, with plot twists so confusing that they make the famously convoluted murder plot in The Big Sleep look about as puzzling as Goodnight Moon.

Hunt and his IMF team (Ving Rhames, Simon Pegg, miscellaneous others) are looking for a random international bad person or thing (this time around it's a batch of stolen plutonium), which then puts them in search of Plot Point 2, which means they have to defeat and/or join forces with Plot Point 3, leading to Plot Points 4, 5 or 6 as needed. The characters — both good and bad — thrive in an atmosphere of permanent double-cross, in which it becomes impossible to sort out which person was working for what intelligence agency or villainous sub-contractor and exactly who plotted what against whom. If this sounds like a criticism, it's not. Some spy movies like to lay all their cards out neatly; the M:I series prefers to do card tricks.

Writer/director Christopher McQuarrie (who also made 2015's M:I–Rogue Nation) understands the formula: Shake things up, don't slow them down. The end of the Cold War gave action movies a new villain — generic terrorism — and a free pass on ideology. Political sides don't matter when allegiances change every fifteen minutes. There's only the team, and you're either on it or off it. Everything else is simply a global McGuffin, an excuse for 150 minutes or so of chase scenes and mayhem in exotic locations (this time around, it's Paris, London and Kashmir). If there absolutely must be some kind of exposition or soul-searching, McQuarrie stages it during a gun-drawn stand-off or while a character is defusing a bomb.

What holds the film together, perhaps surprisingly, is Cruise, the center of all of the frenzied activity. Cruise has aged into the role of Hunt, and there's hardly a trace of the winking, I-can-get-away-with-anything young hotshot of Top Gun or Risky Business. Hunt is a cipher, always focused on the mission at hand because he has no life outside it. Cruise expresses the character by sharing his willingness to dangle in mid-air or hurl himself through a window. The Mission: Impossible films are glorious nonsense, but Cruise's commitment to the stunt work gives them a necessary point of gravity, a slice of reality amid all the chaos.