After a series of delays, the filmhouse will do a soft launch on December 12 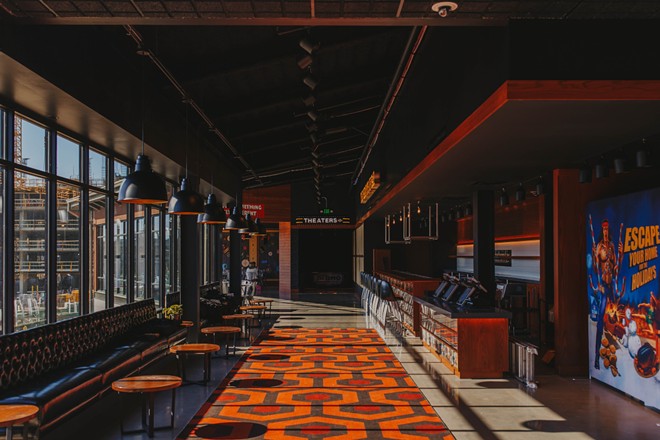 Are you a film buff, a movie lover? Pay attention. Are you one of those people who can't just turn on a flick on a streaming service and be truly satisfied? Listen up.

Do you need your popcorn just so? Does it need to be dark as what else? Does your screen need to be as large as possible? Do you like it to be absolutely silent with no dings from phones distracting from your viewing?

Well, then, the Alamo Drafthouse might be your next best thing.

"We cater to movie lovers," says Jennifer Johnmeyer, cinema director of communications. "We want to preserve the experience."

The theater chain, which will hold its St. Louis soft opening beginning December 12, has long billed itself as "not another multiplex," serving its patrons quality food and drink to complement their film watching. The St. Louis location will have a full bar as well as local food specials, such as gooey butter cake with lemon and blueberry compote, toasted ravioli and St. Louis-style pizza. Courtesy City Foundry
Like all Alamo Drafthouse locations, St. Louis will have a full bar.

Though most showings will have rules around talking and texting for the best experience for viewers, Alamo also holds movie parties, a monthly themed events with a 30-minute pre-show.

"You can go watch the movie, have a server bring your food and beverage and never have to leave your seat except to get a bathroom," she says.

The St. Louis franchise will open in the Foundry complex (3765 Foundry Way) and is five years in the making, thanks to slowdowns from the COVID-19 pandemic. In October, the theater announced a November opening that did not materialize.

Like all of the Drafthouses, is it has a theme: absurdist comedy.

It's a tribute, Johnmeyer says, to different comedies throughout the ages, but especially Monty Python. There are several nods to the comedy greats throughout the theater as well as to others that run the gamut from Pee-wee's Big Adventure to The Big Lebowski. The location will have an interactive scavenger hunt for visitors to uncover all the various references. For those that find them all, there's a prize.

Tickets during the soft opening are 25 percent reduced, and the theater has released it's initial lineup: The Inspection, Violent Night, Black Panther: Wakanda Forever, National Lampoon's Christmas Vacation, Elf, Bones and All, Strange World, and Triangle of Sadness.

In addition to mainstream picks, Alamo makes a point to show indie titles from local filmmakers and likes to work in collaboration with local organizations.

The theater will hold its official opening on January 11.

"We're so excited to finally be here," Johnmeyer says. "It's been almost five years in the making, several stumbles with with shutdowns along the way, but I can safely say I've never been more excited to open a draft house."

This story headline was updated to correctly identify when the Alamo Drafthouse will be opening.