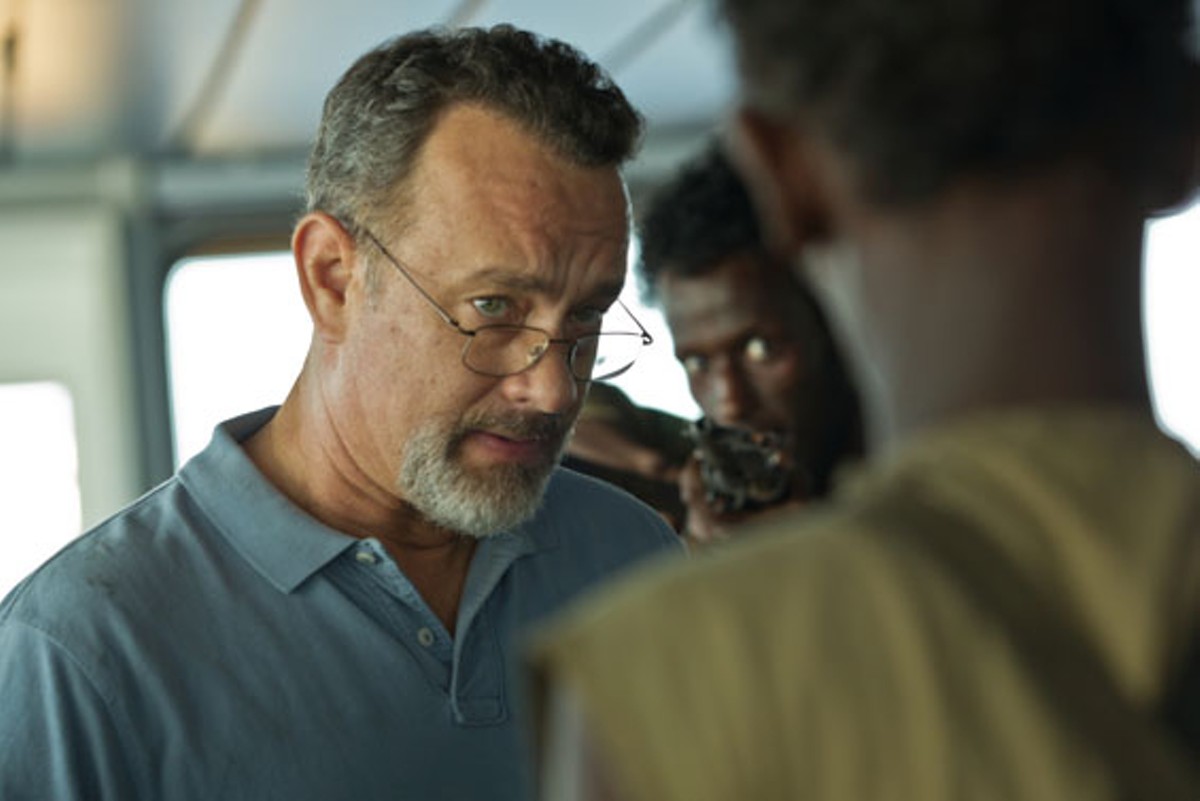 Tom Hanks has built a career out of playing aggressively noble roles, so it's only natural to want to see him taken down a peg. But it's no fun to watch him suffer at the hands of Somali pirates in Paul Greengrass's true-life adventure Captain Phillips. Hanks plays the commander of the Maersk Alabama, a U.S. cargo ship en route from Oman to Kenya beset by Somali pirates. After trying to negotiate with these aggressive, trigger-happy extortionists, he somehow persuades them to release the ship and its crew in exchange for the wad of cash stashed in the ship's safe. The solution, of course, isn't as simple as that, and the ordeal that unfolds over the next five days involves further fruitless negotiation, countless bumps and bruises, and, ultimately, bloodshed of the sort Robert Louis Stevenson never imagined.

Captain Phillips was adapted by screenwriter Billy Ray from Richard Phillips's memoir, A Captain's Duty: Somali Pirates, Navy SEALS, and Dangerous Days at Sea. The Maersk Alabama, hijacked in 2009, was the first American ship to be raided by pirates in nearly 200 years. (Though it's not mentioned in the movie, pirates attempted another raid — thankfully, unsuccessful — on the same ship later that same year.) Especially for a modern adventure movie, Captain Phillips is spectacularly well-made: Greengrass has given us serious-minded pictures (Bloody Sunday, United 93) and entertainments that skitter and scamper across rooftops and continents (The Bourne Supremacy, The Bourne Ultimatum), and he's adept at keeping things moving without gumming up the works.

Early on, Phillips, knowing the ship is headed for potentially pirate-infested waters, gets the willies and stages a drill so the crew will know what to do if they come under attack. The camera — even though Greengrass and cinematographer Barry Ackroyd favor the shaky, handheld kind — follows the men with precision and grace, through long, narrow corridors and into watertight chambers lined with pipes and dials. Shots are edited intelligently and meticulously; you always know where you are and why, and if you don't, it's because Greengrass hasn't told you yet. When Phillips, in an effort to defend his ship, removes a particular something from a box, you might at first wonder, "Shouldn't there be a line of dialogue telling me what it is he's fetching?" Then you realize — duh! — you'll find out what it is by watching. We've become conditioned to having everything in popular movies explained by dialogue; Greengrass returns audiences to a kind of innocence, reminding us that it's OK to trust our eyes.

Still, there's something about Captain Phillips that's exhausting, and it may have to do with Greengrass's insistence on trying to explain why unhappy Somalis would want to clamber aboard an American ship and start firing automatic weapons willy-nilly. (That's something another fine recent picture about Somali pirates, Danish filmmaker Tobias Lindholm's A Hijacking, doesn't feel the need to address.) When it comes to racial, religious, and political sensitivities, Greengrass is a thoughtful filmmaker. Even in the face of the most aggressive human behavior, he wants to understand motives and complications, and here he takes great care to show us how desperate these men are, in some cases needing to provide for their families.

Explanation doesn't necessarily equal justification, but these are some rough, nasty (if confused) guys. Greengrass of course needs to humanize them, and the actors he's chosen to portray them — particularly Barkhad Abdi as the leader, Muse, and Barkhad Abdirahman as addled teenager Bilal — are superb. But Captain Phillips gets dangerously close to making a "these people just can't help themselves" defense, which is a particularly subtle, if unintentional, kind of racism. The pirates' desperation counts for something, but it doesn't excuse acts of terror committed against unarmed sailors.

But even if Captain Phillips treads into some ideologically rough waters, there's one thing that's hard to find fault with: Hanks gives a performance that goes from good (through the first 124 minutes) to extraordinary (in the last 10). Yes, he's easy to pick on, particularly given that in his most recent pictures — Larry Crowne, those movies based on Dan Brown novels, Cloud Atlas — he's been forced to wear some distractingly weird hairdos. But when he's not tonsorially challenged or playing a noble simpleton with his pants hiked up to his nipples, Hanks can be a marvelous performer, and in Captain Phillips, he lets out one hell of a quiet roar.

Instead of writing all of Phillips's anguish, fear, and frustration in big loops, he parcels them out discreetly, with a glance here and a half-hidden frown there. And at the movie's end, he does something so astonishing, and yet so effortlessly natural, that I can't recall ever having seen anything like it. Hanks's performance captures an essential but subtle idea: The things you do to survive a crisis are just the beginning; the real work begins afterward, when the world has gone back to normal but you haven't. When you can finally stand without lurching, that's when you've really got your sea legs.