Not Quite Expendable: Stallone tries to make a star out of Statham 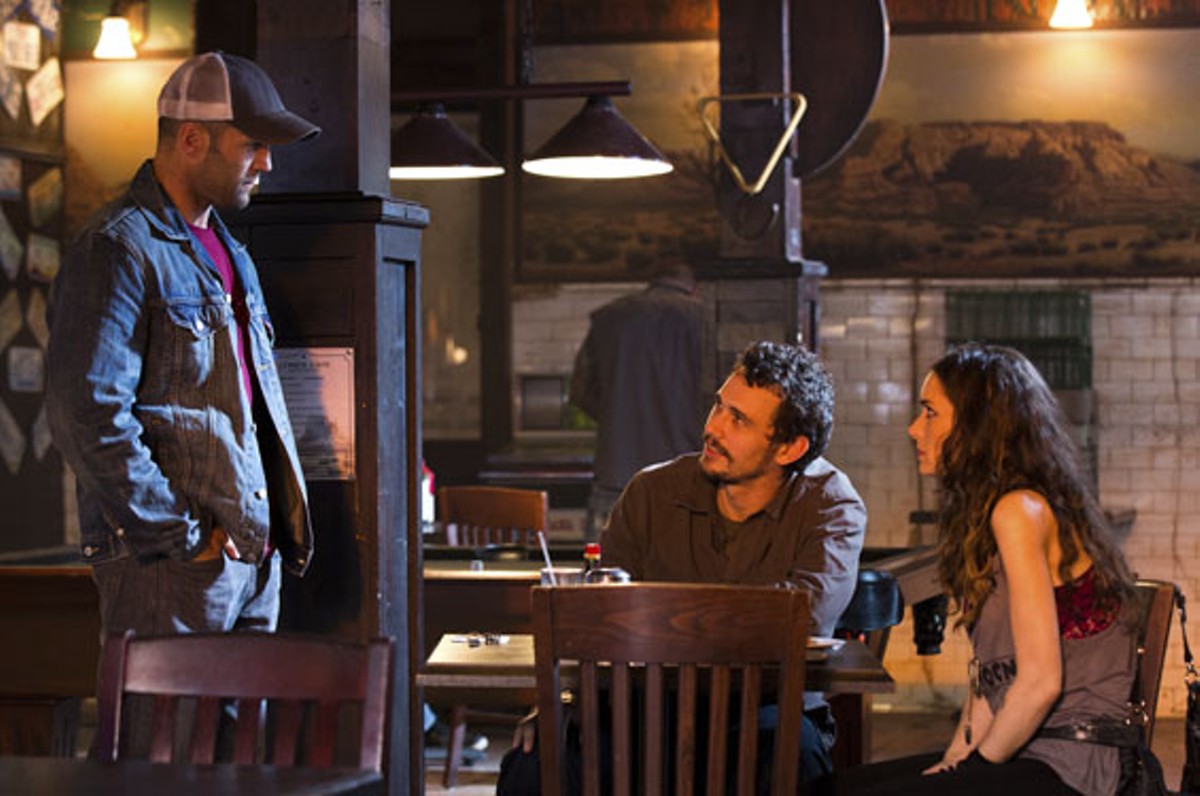 Not Quite Expendable: Stallone tries to make a star out of Statham

Once upon a time — the 1980s — you could walk into a movie theater any day of the year, plop down a few bucks, and watch one man kick another man's ass. Not every action flick was great, but most were good enough, the film equivalent of pizza. Back then, Jason Statham, the star of the new action drama Homefront — and another two dozen just like it — would have been a forgettable punching bag. Today, he's an action lover's last hope, though we support his career with the same dutiful gusto as tea partiers voting Romney.

What's gone wrong in the past 30 years? It's not just that action movie scripts are dramatically worse. (Though they're doubly serious and half as funny.) It's that today's stunt heroes don't have Arnold Schwarzenegger's swagger, Jean-Claude van Damme's splits, Steven Seagal's ponytail, or Sylvester Stallone's operatic flop sweat. Statham has no hook, not even a memorable mustache. Instead, he seems glumly determined to convince us he can act. He really needs to make us applaud.

Compared to these '80s kings' larger-than-life screen presences, a Statham three decades ago would have been lucky to get cast as Stallone's best friend who dies in the second act. Today, Stallone himself is mentoring Statham's career, anointing the former Olympic diver and underwear model as his best friend in The Expendables franchise and now writing him this script.

Statham plays ex-DEA agent Phil Broker, who we first see setting up a sting on a gang of meth-dealing bikers. To go undercover, the bald actor sports a mop of Glenn Danzig hair. It's the most miserable-looking wig since John Travolta's three-foot dreadlocks in Battlefield Earth — so it's a blessing when, after five minutes of bloody chaos, Homefront fast-forwards two years to when Broker's retired and shorn and hiding from his ex-gang in a small Louisiana town.

We're surprised to learn Broker has a nine-year-old daughter, Kit (Izabela Vidovic). How was he getting her to school when he was on the road racking up indictments? Conveniently, he had a wife who must not have minded motorcycle grease and the months apart. And conveniently, she's now dead, in the grand tradition of women who best serve a script by disappearing. (See also: every Disney mother. And don't blame pulp writer Chuck Logan — in the original novel that inspired this flick, the missus is a main character.)

In the love interest role is a foxy school psychologist (Rachelle Lefevre) who warns this dad and daughter that their new home is "a bit like Appalachia — feuds still exist." When Kit punches the school bully in the nose, she precipitates a chain of clan violence, angering the boy's redneck mom (Kate Bosworth, improbably), her drug-dealing brother (James Franco, ironically), his biker girlfriend (Winona Ryder, unabashedly), and her outlaw acquaintances who are just thrilled the fed who set up their friends has resurfaced.

I'd pay good money for a spin-off flick about Bosworth and Franco's swamp family, with their high cheekbones and violent glee. Imagine their Christmas cards. Alas, we're stuck in this flick, where Franco isn't given much to do besides sport an alligator tattoo and steal Kit's stuffed bunny. (Though it is fun watching Bosworth, America's former surfing sweetheart, call a nine-year-old girl a "sneaky little bitch.")

Director Gary Fleder seems to sometimes suspect Homefront could pass as comedy. He lets a local handyman (Omar Benson Miller) shrug of Franco's character, "They call him Gator for some dumb-ass reason." But though Franco's casting feels like a joke, the actor plays this straight, as though being an average villain in an ordinary thriller shows range. He makes boning Ryder on a Mustang seem mundane, when that was the No. 1 fantasy of every straight teenage boy in 1996.

Of course, all this builds to a deadly climax designed to vindicate stand-your-ground laws. Snooze. What's interesting is that Homefront's screenwriter, Stallone, a meathead PhD, knows that audiences are starving for over-the-top '80s action. Statham can deliver the hits — there's a scene here in which he literally fights two men with his hands tied behind his back — and he once showed promise of a personality in the wicked mayhem of Crank and the immortal Crank 2: High Voltage. But Stallone plopping him in this bore feels like an alpha setting up his successor to fail, like Zeus swallowing up his younger, handsomer challengers before they force him into retirement.

Is there hope for Jason Statham and a generation of action fans who want to see someone — anyone! — succeed in ass-kickery? A glimmer. Statham has now officially passed the Schwarzenegger Star Test: playing a regular American guy without masking his European accent. Throughout Homefront, local yokels sidle up to him and ask where he's from. Is Broker a cop? Ex-military? What gives with the muscles, man? But no one asks him, "No, where are you from-from?" It's as if his flannel shirt and ball cap are enough to distract from his growling Limey vowels.

It takes either star power or star prevalence to command this flagrant suspension of belief. Statham's prevalent, all right. Yet he still needs to earn our love — and given Coach Stallone's crooked career advice, I'm betting it won't happen in The Expendables 3.