Oh, don't be such a cynic. Matt Damon needs your love in We Bought a Zoo. 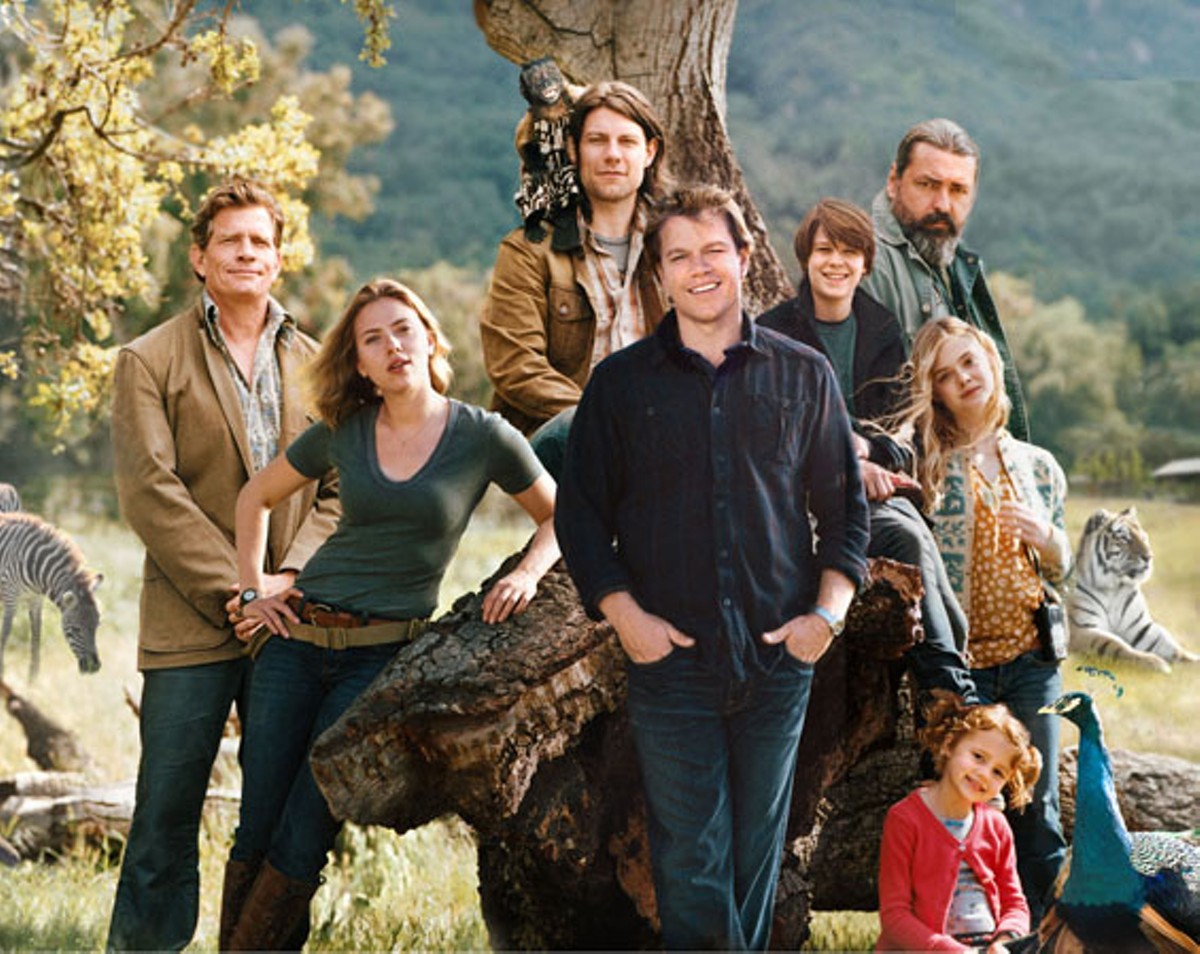 Oh, don't be such a cynic. Matt Damon needs your love in We Bought a Zoo.

When I told someone I was off to a screening of We Bought a Zoo the other day, the response was an eye roll. The reaction's understandable: Save for two music docs — an Elton John–Leon Russell album making-of and that Pearl Jam anniversary infomercial — Cameron Crowe has been MIA since 2005's autobiographical Elizabethtown, about the prodigal big-city son returneth to his small town to fetch his dead daddy's ashes for a long drive to nowhere. Crowe took a tanning over that weepy wreck, which made Garden State feel like early-days David Gordon Green. Both that movie and his earlier Vanilla Sky were as disappointing as they were ambitious, which is being kind on both fronts. Crowe tried going big, and he was sent home.

So now he returns with a film he did not write, but rewrote, based on the real-life story of Benjamin Mee, a Brit newspaper columnist who picked up from his idyllic new digs in the South of France and went off to rescue an English zoo with his family, including a son, a daughter and a dying wife. The movie changes these circumstances around a bit: The wife is six months gone before Benjamin (the quite-American Matt Damon), moody fourteen-year-old son Dylan (Colin Ford) and bright-'n'-shiny seven-year-old Rosie (Maggie Elizabeth Jones, made for the movies) consider the move. And in the movie, they don't relocate from the French paradise to the English countryside, but from a Los Angeles suburb to the rolling hills of Southern California, where dad hopes to escape the ghost who haunts them all. And look who's here to help: Scarlett Johansson.

Crowe, who ran Aline Brosh McKenna's first draft through Word before signing on to direct someone else's life, is back to what he's good at: small stories populated by everyday people. (He has always veered toward being a small-screen guy who worked big-screen; Say Anything..., Singles, Jerry Maguire and Almost Famous could have been prime-time pilots.) Helping Crowe's odds is Damon, who does a superior job of vacillating between wide-eyed (Look! A grizzly bear!) and misty-eyed (I wish my dead wife weren't dead) without turning Benjamin into a complete sap. We see him at the film's beginning as an "adventure writer" for the Los Angeles Times, flying into the center of storms, and asking terrorists cutesy questions to which the answer is "Toy Story 2." But soon, Dylan is expelled from school (his drawings are violent, and he's stealing, and, oh, sorry about your dead mom) and Benjamin's about to get shuffled off to the blogs by his boss, so, time to go house-hunting. And now time to buy a dilapidated zoo on the verge of being shuttered and sold for the land alone. It's populated with lions, tigers and bears — and humans, too, among them Johansson as the long-time zookeeper (well, assistant, but shhh), Angus Macfadyen as a visionary enclosure designer and Elle Fanning as an angel-faced love interest for Dylan. We didn't just buy a zoo; we bought a new family! So Crowe.

On the surface, it all sounds so terribly mawkish, and I haven't even mentioned the on-the-nose soundtrack that cues up Randy Newman's "I Think It's Going to Rain Today" during a long storm. Or Tom Petty and the Heartbreakers' "Don't Come Around Here No More" when Dylan gets the boot from school. Or Wilco and Billy Bragg's "Airline to Heaven" when the Mees start looking for new digs. Or Benjamin's reluctance to let the zookeepers put down, painlessly, the ailing seventeen-year-old tiger aching for an adios. We get it — he has been down this awful road before.

The cynic will scoff and dismiss it all as manipulative, the heart-string-tugging machine on hyperdrive. But this movie isn't for them; did you not see the PG? It's a sweet, sincere, utterly affable kids' movie about how parents are all kinds of screwed up and unable to tell them what they want or show them how they feel. The scene in which Benjamin and Dylan have their hallway shout-off ("Help me, damn it! Help me!") is as wrenching as it is inevitable. And Damon has never been more lovable — the guy looks like he could use a hug.