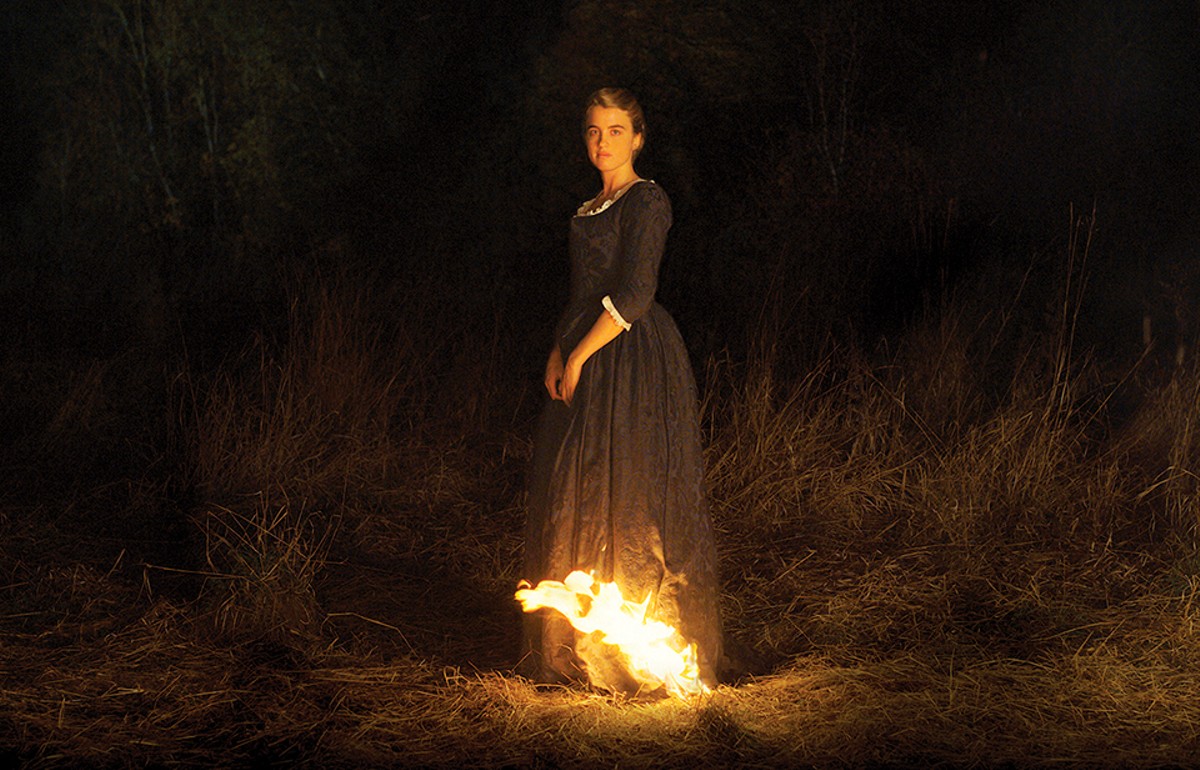 Héloïse (Adèle Haenel) is about to marry, and not willingly. (C) LILIES FILMS

Portrait of a Lady on Fire

Near the beginning of Portrait of a Lady on Fire, a young painter named Marianne (Noémie Merlant) is taken by a choppy boat ride to an island in Brittany. The men on the boat — the last male figures she will see until very close to the film's end — refuse to help her with her baggage, as if afraid to set foot on the isolated landscape. Marianne has been hired by the Countess (Valeria Golino), the island's most prominent resident, to paint a portrait of her daughter Héloise (Adèle Haenel) to be presented as an enticement to the daughter's suitor, a wealthy Milanese nobleman. One gets the sense that the Countess' financial future rests heavily on this match, but there's a hitch. Héloise doesn't want to marry and refuses to pose for the portrait. Marianne must become her companion, working on the painting in secret.

That's a brief but intricate set-up for Céline Sciamma's charmingly haunting romance, although the film is far lighter and less byzantine than it sounds. Sciamma's Portrait is a love story about women and their desires, set in a pre-modern, timeless environment. When the Countess leaves the island for a few days, the two young women — along with a young maid, Sophie — are left alone to speak freely, read poetry and fall in love.

There are traces of a Gothic romance — family secrets and intense emotions — but treated with a playful quality, giving the film the atmosphere of a fairy tale: Two young princesses playing out the rituals of romance and exploring a new, unfamiliar world. They have a very serious discussion of the love story of Orpheus and Eurydice and its tragic ending (Orpheus' fatal gaze becomes a visual metaphor later in the film). They attend an outdoor party where the local women break into a spontaneous song/chant. In a curiously light-spirited sub-plot, they try to help Sophie abort an unwanted pregnancy. They make love, spontaneously and unhesitatingly, two innocents discovering their own passion. "Do all lovers feel they're inventing something?" Héloise asks Marianne, and there's a sense that their affair is, indeed, more invention than transgression.

There will be much discussion of Sciamma's film as an exploration of the female gaze, a revisionist critique of the idea of the "male gaze." This is a film about women looking at each other, and at themselves, imagining how they are seen, but even its theoretical musings are treated with mischievous imagination. When Marianne agrees to make a self-portrait, she draws it in bed, working from her own reflection in a mirror placed over Héloise's crotch.

For all of its social musings and lively digressions, Portrait of a Lady on Fire is primarily a love story and unavoidably a tragic one, but the sense of inevitability and of the cultural limits and foregone conclusions of a woman's role in society are balanced by the film's unrestrained liveliness, its joyful exploration of freedom and companionship. It's a portrait of women under restraints (the fire in the title seems to be a symbol of Marianne's frustrated rage), but also of women at play, creating a world of excitement and romantic invention.