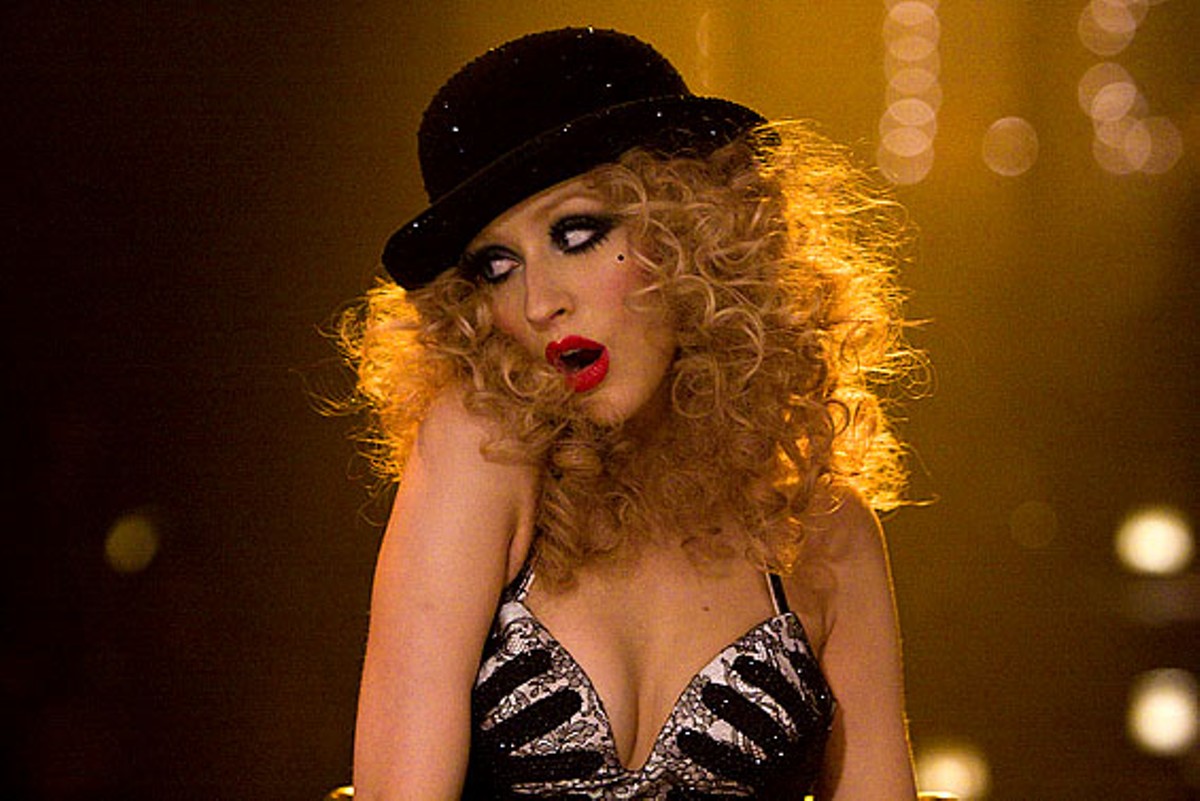 She doesn't sing that way because she's had it easy." This is how Tess (Cher), the long-suffering owner of the nightclub at the center of Burlesque, defends her new star, Ali (Christina Aguilera), to the club's jealous, deposed marquee attraction, Nikki (Kristen Bell). The same phrase could substitute as a marketing mission statement for Aguilera herself, who, throughout her decadelong adult career, has deftly incorporated triumph-over-trauma into her brand.

Aguilera's narrative, presented to the world via lyrics, music videos and interviews, begins with an abusive father and single mother, moves on to battles with depression and bad body image, and has recently been updated to include now-mother Aguilera's very public divorce. Through it all, she seems to repeat a pattern: Admit crippling vulnerability, as in the hit ballad "Beautiful," and then boldly, bitchily and nakedly (often almost literally) embrace the pain, as in the single "Fighter," in which she thanks an unnamed tormentor, because "If it wasn't for all of your torture, I wouldn't know how to be this way now and never back down."

Programmatic by design, Burlesque flattens Aguilera's inherent thorny appeal — the persona that's at once obnoxiously "provocative" and sympathetic — by laughably casting her as the 21st-century, torch-singing equivalent of Ruby Keeler in a hodgepodge of Busby Berkeley plots, with none of the Depression-era style or social critique. Aguilera's innocent Ali is a small-town orphan who shows the audience her audacious singing talent over the opening credits and then Greyhounds it from her tiny Iowa hamlet to Hollywood. There, she pounds the pavement looking for work and ends up at Burlesque, where she instantly becomes entranced by the stage show: highly gymnastic, quasi-comic lip-synch routines set to standards, performed by a cast of homogenous young things in sailor-motif underwear-as-outerwear. Ali might be impressed, but business is hardly booming, and it's easy to see why: Burlesque lacks both the reliable base appeal of a real strip club (while the costumes are skimpy, they rarely come off) and, with Tess the only member of the company who dares to sing live, a personal touch. Ali (and the viewer) knows she can out-sing the recorded vocal tracks, but she keeps her talent to herself while working her way up from waitress to dancer.

Running an unconscionably extended 116 minutes, Burlesque is nearly half over before Aguilera is allowed to be Christina Aguilera. When she finally shows Tess and crew what she can do — singing Etta James' "Tough Lover" without accompaniment — it's the moment the movie's been desperately waiting for. Time stops, audiences both on- and offscreen simultaneously get tears in their eyes and shivers down their spines and gigantic boners, and the film's many flaws temporarily fall away.

But only temporarily. Burlesque, directed by Pussycat Dolls creator Steve Antin from a script credited to him and reportedly worked on by Diablo Cody and Susannah Grant, is so hampered by its influences that it wastes its primary asset: its superstar. Instead of leading with what Aguilera does best — belting, vamping, spotlight hogging — the movie shoehorns her into a rehashed backstage musical conceit: Good girl is tempted by bad guy, ultimately resists, becomes a star, finds love and saves the show. (The fact that naive Ali's flirtation with the dark side is signified by her newfound proclivity for limited-edition stilettos and Herve Leger dresses is both hilarious and incisive.)

Burlesque, like Chicago before it, offers dispiriting evidence that the Hollywood musical is stalled at weak imitation Bob Fosse. Cabaret is clearly Antin's guiding reference, with the similarities going way beyond the superficial (the hats, the garters, the chair dancing). Antin confines each musical number to the stage, weaving in offstage narrative — there's even a post-consummation love ballad illustrated with scenes from the bedroom, à la Cabaret's "Maybe This Time." What worked as a dialectical tactic in that film, creating ironic tension between the worlds onstage and off-, here feels like a tacit admission from Antin that he doesn't have enough faith in the audience's ability to watch an unbroken performance, to read story and character development into the song and dance itself.

To be fair, it's not like he's working with Kander and Ebb. Burlesque's songs were written by a wide variety of producers and performers (Aguilera cowrote just three), and not only is there no consistent creative throughline, but they serve no storytelling function — in fact, most songs were mixed like standard club tracks, rendering specific lyrics incidental. The film's catchiest tune is "The Beautiful People," bizarrely based on a Marilyn Manson sample. But Antin treats it like a throwaway, using the song to back a scene that takes place outside of the club, so even though Aguilera sings it, Ali doesn't.

Fred Astaire used to insist that his onscreen dances be shot wide and virtually uncut, so that there'd be no doubt the performers were doing it for real and not faking it for the camera. Antin takes the opposite approach, fragmenting each number into quick glimpses of gestures, so that we get no sense of how the dancers are moving through space. What you remember when it's over is the impact of Aguilera's voice, but not what she's singing; montages of body parts, but not the choreography; and Aguilera's face, music-video-trained to hold a close-up so emotionally exaggerated, you might even call it a burlesque.