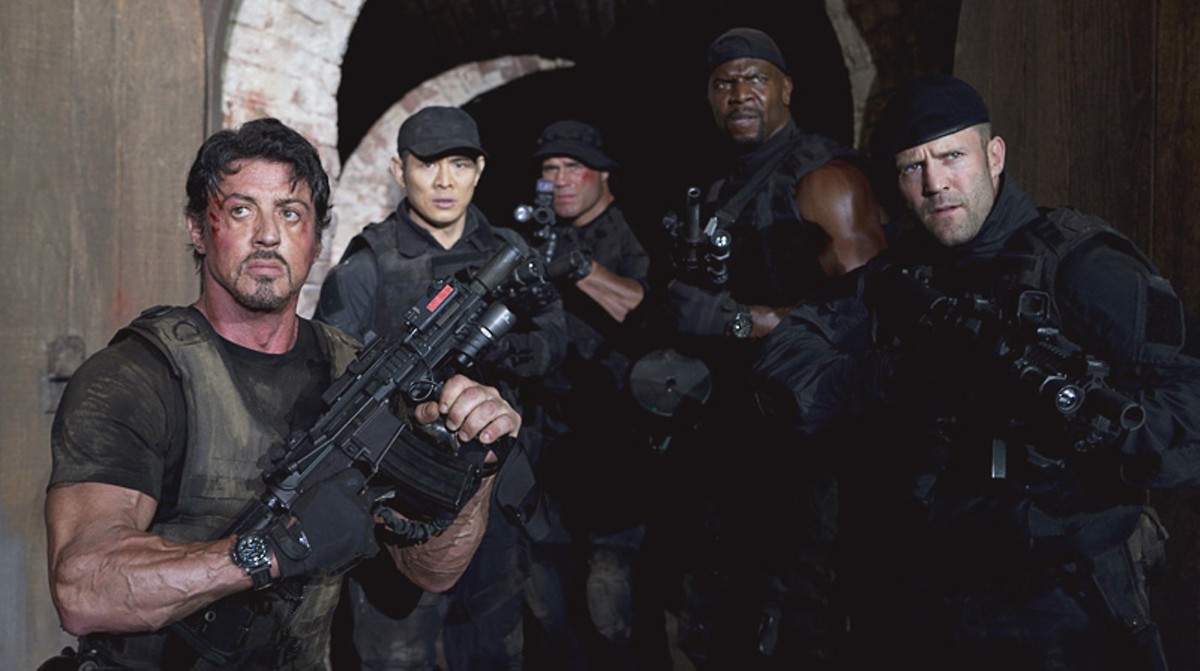 "If the money's right, we don't care where the job is." So explains the leader of hired-gun task force The Expendables, Barney Ross (Sylvester Stallone). This credo lands Ross and his team in the Gulf of Aden as our story begins. Somali pirate kidnappers staging a videotaped decapitation are pinned down by dancing laser sights — and the ripped-from-the-headlines baddies are ripped apart. A human trunk splats against the wall, and star/director/co-screenwriter Stallone slaps his cards on the table.

Rocky's creator is a promoter at heart, and in his career's third act, Stallone is hawking nostalgia. After farewell tours with Balboa and Rambo: Stallone presents The Expendables ("If the money's right..."). Tipped by the presence of Rocky IV nemesis Dolph Lundgren and cameo favors called in from Planet Hollywood, the movie is a throwback to '80s run-and-gun action, when Hollywood gym rats made boffo box office depopulating Third World countries.

Stallone and Jason Statham have the lion's share of screen time here; the full Expendables aren't together much when not killing, and never gel as an ensemble. Lundgren is a fringe presence, Jet Li and UFC vet Randy Couture are awkward outside of a scrap, and, in "The Carl Weathers Memorial Role," Terry Crews, a great comic, doesn't get the opportunity to create the familiar, relaxed, workaday banter that the movie requires — though his weapon is a sight gag of sorts, an automatic shotgun with a drum magazine that pops henchmen like water balloons.

Between commissions, the gang convenes at the New Orleans tattoo parlor of ex-Expendable Mickey Rourke. Stallone rolls up in a hot-rodded '55 F100; Statham, in a hot Ducati. It's a fantasy clubhouse catering to gearheads and bros in Affliction shirts, and a ways from Stallone's Paradise Alley or his long-stated dream project, an E.A. Poe biopic — for who better knows the travails of the artist in America? Stallone has the lushly dark eyes to play the poet, but they're now set in a shiny, red, curiously smooth face. (The Expendables do sport a Raven on their insignia.) At age 64, Sly's still peddling his action-figure musculature, the cigar nub he smokes almost indistinguishable from his swollen fingers.

Pirates liquidated, the Expendables' next mission concerns the fate of the South American nation of Vilena, where Generalissimo Garza (David Zayas) grinds the populace beneath his iron heel. This consists of soldiers shaking the peasantry around and literally upsetting their apple carts. Garza is torn between his imperialist yanqui backers (tailored and tanned Eric Roberts and bodyguard "Stone Cold" Steve Austin) and his idealistic, vaguely artistic daughter, played by Giselle Itié. ("That's Shakespeare!" chortles a good-for-a-laugh Roberts of the family feud, though it's more like Telemundo.)

As in Stallone's last Rambo, where a good-hearted Christian woman resurrected John Rambo's wrath to the woe of the Burmese junta, Itié's vague Hope gives the Expendables a purpose. Smushed in close-up, Rourke gives a teary, deal-sealing keynote speech about redemption, beginning, "When we was up in Bosnia..." It's a disingenuous sop from a script that recklessly deploys loaded images of napalm and waterboarding as part of its dirty-thrills sensory assault, but Stallone has always had a knack for buffaloing past complexities rather than lingering over them, and a moral compass with erratic bearings is better than none at all.

Though Expendables does not have that last Rambo's...let us call it focus — it tries manfully to top that film's berserker, kill-'em-all climax in a siege on Garza's palace, with a body count good for a High Score in Contra. Here, Stallone's julienned editing — you get every vantage but the clear one — whips up a blizzard of violence, bodies by the hundred being sundered in the most extraordinary ways, registering almost subconsciously. Couture punches a man wreathed in CGI fire...Li snaps a head back with a guillotine kick...Sly reloads three times in the span it takes fleeing soldiers to cross twenty feet of uncovered ground....

It's surprising to emerge into a still-intact world after this Ragnarök spectacle, as all-in as if it were the last shoot-out ever to be filmed...Or the first? The Expendables ends with a knife thrown at the camera, a parting assault on the audience reminiscent of 1903's The Great Train Robbery. This is action as timeless as the reptilian brain — and if The Expendables is no classic, for about twenty minutes, it blowed up real good.